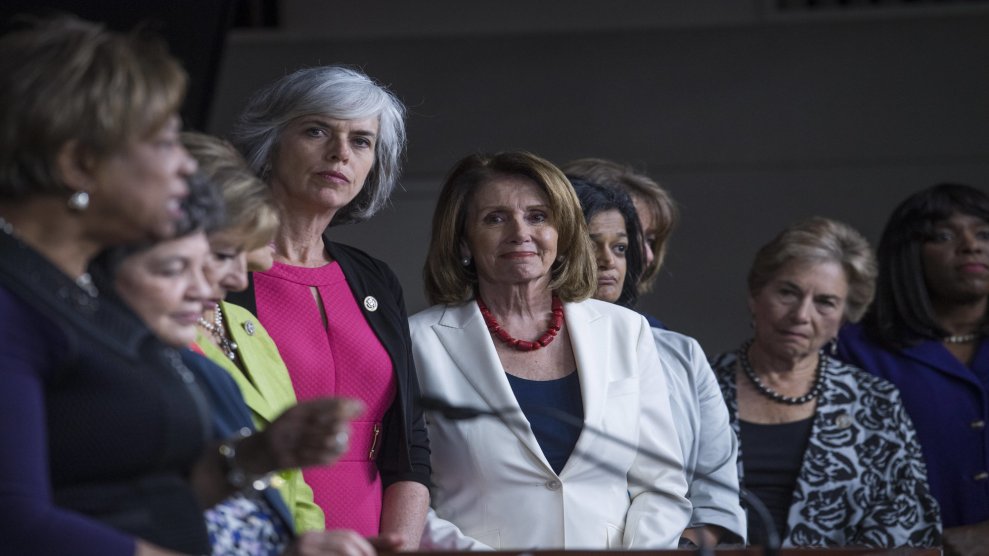 At a press conference Friday, the California Democrat read a list of crimes for which legal experts have said Donald Trump Jr., Jared Kushner, and Paul Manafort could potentially be prosecuted as a result of their June 2016 meeting with a Russian lawyer. They hoped to receive damaging information—courtesy of the Russian government—about Hillary Clinton. Pelosi spoke to reporters just as the news broke that Rinat Akhmetshin, a DC-based lobbyist for Russian interests, had also attended the Trump Tower meeting. Akhmetshin has denied reports claiming he’s a former Russian counterintelligence officer.

“This is a campaign violation: soliciting, coordinating, or accepting something of value—opposition research, documents, and information—from a foreign government of foreign national,” Pelosi said, reading from notes. “Plain and simple.”

She went on to list potential charges without providing further context: “Criminal conspiracy to defraud the United States, impeding the lawful administration of a federal election or to make an offense against the United States, cybercrime, hacking against US citizens—the Clinton campaign.”

“Republicans in Congress have become enablers of the Trump-Russia assault on our democracy.”

“Conspiracy with respect to espionage, depending on whether information was obtained through Russian spying and the level of their awareness of the spying,” Pelosi continued. “When I say ‘their,’ I mean Trump, Kushner, Manafort etc.”

So was she charging that Trump Jr., Kushner, and Manafort violated those laws—or saying they might have? I asked Pelosi this.

“Yes,” she replied. But despite several follow-up questions, she never quite clarified her meaning. “There is very serious reason to believe that these people violated the law,” she said later.

Her remarks were part of a news conference in which Democrats from various House committees detailed steps aimed at pressuring House Republicans to investigate Trump more aggressively. These include a procedural move, a “resolution of inquiry,” by which the Democrats intend to force a vote on a request that Attorney General Jeff Sessions disclose information about his meetings last year with Russian Ambassador Sergey Kislyak—among other matters.

Republicans are sure to vote down the resolution, but Democrats hope it will call attention to their rivals’ reluctance to investigate the administration. “Republicans in Congress have become enablers of the Trump-Russia assault on our democracy,” Pelosi said.

Pelosi has urged Democrats calling for Trump’s impeachment to “curb their enthusiasm.” But with Rep. Maxine Waters (D-Calif.) a vocal impeachment advocate, standing behind her on Friday, Pelosi seemed to edge toward Waters’ position. “We need to follow the facts,” she said. “What did the rest of the Trump family know and when did they know it?”

“I have always been reluctant, because I think impeachment has always been something that has an impact on the country,” she said. “So when the facts are clear—the law is certainly clear—then this Congress will make a decision in that regard.”

As she left the event, Pelosi was asked by reporters to specify which laws she believed the Trump campaign trio had broken. “I said the law was violated,” she answered before her aides hustled her away.