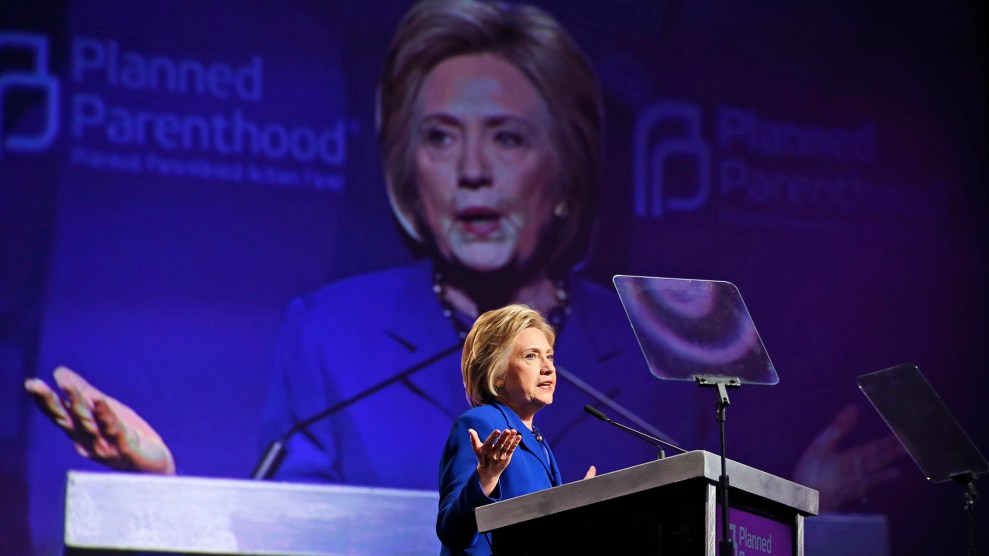 “There is not a litmus test for Democratic candidates,” said Luján in an interview with The Hill. “As we look at candidates across the country, you need to make sure you have candidates that fit the district, that can win in these districts across America.”

Women’s rights groups such as NARAL, All* Above All, and Emily’s List have voiced their frustration with the party’s unwillingness to fully embrace reproductive rights as a bottom-line issue.

“It’s short-sighted and dangerous to pave the path to victory in 2018 at the expense of women,” said Destiny Lopez, co-director at All* Above All Action Fund, in a press release. “Let’s not forget that the widely-lauded Democratic platform in 2016 clearly opposed not just restrictions on legal abortion—it also opposed the Hyde Amendment, which bans abortion coverage.”

Ignoring women’s fundamental freedoms and equality to win elections is both an ethically and politically bankrupt strategy. /2

In the final presidential debate in October, Hillary Clinton made history when she voiced her support for abortion rights onstage. “I will defend Roe v. Wade,” Clinton said. “And I will defend women’s rights to make their own healthcare decisions,”

Her statement was outside the norm for Democratic candidates, for whom abortion has often been a difficult issue. Some have been reluctant to express wholehearted support for abortion rights; others have felt excluded because of their anti-abortion convictions. Last spring, Bernie Sanders (I-Vt) and DNC deputy chair Keith Ellison campaigned in Omaha, Nebraska, for anti-abortion Democratic mayoral candidate Heath Mello. Mello ultimately lost to the Republican incumbent who is also anti-abortion, and Sanders was met with a barrage of criticism for his support.

“We have got to appreciate where people come from and do our best to fight for the pro-choice agenda,” Sanders told NPR in April. “But I think you just can’t exclude people who disagree with us on one issue.”

Other Democratic party leaders, including House Minority Leader Nancy Pelosi and Senate Minority Leader Chuck Schumer (D-NY) have also said the Democratic party should not draw a hard line when it comes to abortion. In June, DNC chair Tom Perez met with Democrats for Life of America who demanded that abortion not be a “litmus test” of the party. The 2016 Democratic platform stated that the party believed “unequivocally” that “every woman should have access to quality reproductive health care services, including safe and legal abortion.”

At a time when the Democratic party is searching for a coherent identity and program after its resounding defeat in 2016, the debate over whether the party openly supports abortion rights will likely continue to heat up as the 2018 races loom.

“Throwing weight behind anti-choice candidates is bad politics that will lead to worse policy,” Mitchell Stille, who oversees campaigns for NARAL Pro-Choice America, told The Hill. “The idea that jettisoning this issue wins elections for Democrats is folly contradicted by all available data.”