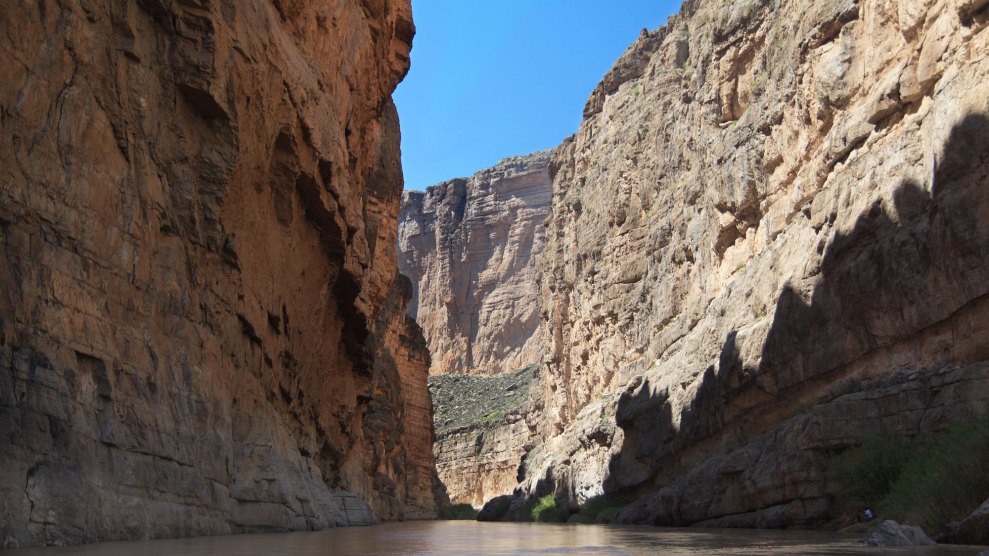 A stretch of the US–Mexico border in Rep. Will Hurd's district.David/Flickr

Texas Republicans are laying low during the August recess. Just eight of the 25 Republicans in Texas’ congressional delegation have held a public town hall in 2017. But Rep. Will Hurd is an exception; the second-term congressman, who represents more of the Mexican border than any other member of Congress, is holding a series of 20 town halls during August (most held at local Dairy Queens), and at many those stops, he has taken aim at one of President Donald Trump’s signature agenda items—The Wall.

Hurd’s district, one of three Republican-held seats in Texas carried by Hillary Clinton last fall, hugs the Rio Grande for 800 miles, much of it sparsely populated. If Trump did build a physical wall spanning the entire length of the US-Mexico border, about 40 percent of it would sit in Hurd’s district; consequently, Hurd has been a critic of Trump’s proposal dating back to last year. Trump’s wall has been a frequent topic during his town halls this week, and Hurd hasn’t been shy about attacking the president’s idea. In a visit on Monday to Alpine, a gateway to Big Bend National Park, Hurd tore into Trump’s “one-size-fits-all approach to border security.”

“Building a wall from sea to shining sea is the most expensive and least-effective way to do border security,” he said.

Unlike Democratic critics, such as his West Texas colleague Democratic Rep. Beto O’Rourke, Hurd does not argue against the wall on moral terms. For the Republican, the wall is a bad idea because it’s expensive and unnecessary. At Monday’s town hall, Hurd recalled an exchange he’d had with then-Homeland Security John Kelly, in which the congressman emphasized the extent to which existing natural barriers, such as the canyons of Big Bend and the 31-mile-long Lake Amistad, make border walls irrelevant.

Hurd described the wall as a waste of money that imposes on the rights of Texans who already live along the border. “I’ve talked about how private property rights are so important to Texans,” he said, “and that the government coming in and trying to take a half mile or a mile width of land all along the border makes no sense.” Instead, he suggested that technology—such as radar, drones, and lidar—could be just as effective as a wall at cheaper prices. “We have the technology today in 2017 that is so inexpensive, it’s basically disposable,” he said. “So why are we not using that along our border? We can tell the difference between a bunny rabbit and a person. We can deploy a small drone to track that until we deploy our most important resource, the men and women in Border Patrol, in order to do immigration.”

But this explanation from one of Trump’s most vocal intra-party critics also speaks to the bind Republicans are in. Hurd may think the wall is a waste of money, but as one voter in the remote border city of Presidio pointed out to Hurd, the congressman himself recently voted to waste that money. As the Texas Tribune recounted, Hurd explained to the man that he had voted against adding wall-funding to an existing spending bill, but ultimately voted for the final bill after he lost that battle. In other words, he voted against the wall before he voted for it.

In Alpine at least, Hurd’s decision to tackle the wall head-on in his opening remarks went over well. (The high number of Border Patrol families in the area surely appreciated his promise to get them more money.) But it won’t be the last time Hurd will have to explain himself. He recently picked up his first major Democratic challenger, Gina Ortiz Jones, a former Air Force intelligence officer from San Antonio. Several other credible candidates, including the area’s former Democratic Rep. Pete Gallego, are mulling their options. And the district itself could become substantially more Democratic over the next few months. In March, a federal court ruled that Hurd’s district (along with three others) had been unconstitutionally drawn to dilute minority voting power, and a trio of federal judges will decide whether to redraw the lines to make the district far less favorable to the Republican. If that happens, he may have to do a lot more than knock the wall to keep his seat.