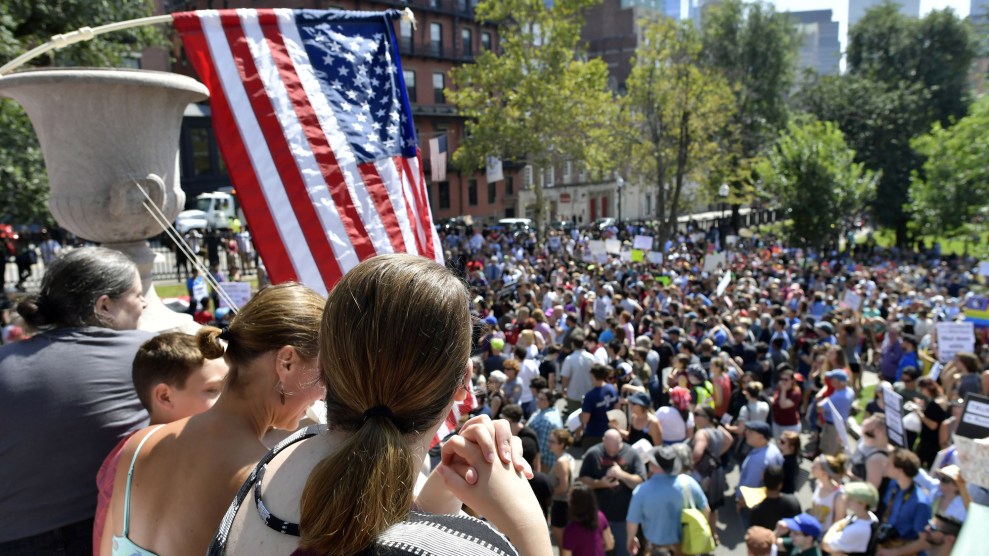 As the nation continues to grapple with the aftermath of the violence in Charlottesville, Virginia, right-wing demonstrators and white supremacists plan to descend on cities in California and Tennessee this weekend, with authorities preparing for possible clashes.

Here’s a look at what to watch out for this weekend.

The national debate over Confederate statues is likely to hit eastern Tennessee on Saturday, August 26, when demonstrators are expected to rally against the removal of a monument honoring Confederate soldiers who died at the battle of Fort Sanders.

The Fort Sanders monument has long been the subject of debate, inspiring dueling petitions to save or remove it. Following the violent demonstrations in Charlottesville, the monument had been vandalized and was later cleaned up.

Activists calling for the statue’s removal have an uphill battle ahead of them: Some members of the City Council have said they’d like to keep the statue in place. But, even if council members did want it removed, a state law passed earlier this year says the city would have to request a waiver from Tennessee’s Historical Commission to move the statue.

Saturday’s rally was initiated by Confederate 28, a local white supremacist group with ties to the UK-based neo-Nazi group Blood and Honour, according to the Southern Poverty Law Center (SPLC). The Tennessee group had recently ended a five-year hiatus, marking its return in June by protesting a gay pride parade in the state and passing out fliers in Indianapolis, according to SPLC. But it seems the revival might have been short-lived. In a statement on Wednesday to WATE, a local Tennessee news station, a spokesperson for Confederate 28 stated that the group had dissolved “due to internal issues” and no longer had a “hand in the rally.”

The rally, though, still seems set to move forward without the stewardship of Confederate 28. Knoxville police plan to close off streets in the city to form designated areas for demonstrations and officers plan to confiscate weapons, masks, and other items brought into the area that could be potentially used as weapons. Mayor Madeline Rogero noted in a statement Wednesday that Knoxville police would “maintain order and ensure everybody is free to speak their piece” and urged participants to “refrain from antagonism” during “violent times.” Knox County Mayor Tim Burchett also pleaded for safety in a statement on Wednesday, “as out-of-town white supremacists and neo-Nazis head toward eastern Tennessee.” “The racism and hatred of these white supremacists and neo-Nazis don’t reflect our values, and they are not welcome here,” Burchett said.

Counterprotests: A demonstration dubbed “Knoxville Against White Supremacy!” is expected to take place on Saturday as well, though the plan is for it to begin an hour before the whtite supremacist rally. The organizer’s Facebook event pledges a nonviolent demonstration with signs. “It’s nothing like Charlottesville,” Chris Irwin, who helped organize the counterprotest, told WATE. “We’ll be clearly kept apart, but they’re going to be able to clearly hear us and it’s a chance for Knoxville to say, ‘Not in our town.’”

The Oregon-based group Patriot Prayer has organized the “Freedom Rally San Francisco” demonstration for Saturday, August 26, and received a permit earlier this month from the National Park Service to host the event at Crissy Field, a slice of federal land covered by Golden Gate National Recreation Area.

San Francisco Mayor Ed Lee told reporters in a last-minute press conference last week that the city had only recently learned of the permit and demanded the National Park Service reevaluate its decision. He joined the chorus of California politicians from Sen. Dianne Feinstein to House Minority Leader Rep. Nancy Pelosi in denouncing the rally as inciting “hatred, bigotry, and violence.”

On Wednesday, the National Park Service confirmed the permit for the Patriot Prayer rally. “We cannot deny a permit to anyone planning to exercise their First Amendment rights based on their political stance or beliefs,” said Golden Gate National Recreation Area acting superintendent Cicely Muldoon in a statement. “We can deny a permit application for public safety reasons if the event raises such significant public safety concerns that law enforcement cannot manage the event.”

In the past, SPLC has connected Patriot Prayer with hate-fueled protests and their events have attracted white nationalists. But Joey Gibson, the founder and organizer for the group, told the Mercury News that their demonstration is concerned with free speech and that his organization is a moderate one that does not welcome white nationalists at their events. Gibson also said that white nationalists Richard Spencer and Nathan Damingo have been barred from the event, though the list of speakers slated for Saturday includes Kyle Chapman, a right-wing provocateur who was arrested on suspicion of assault after he was caught on video hitting an anti-fascist counterprotester on the head with a curtain rod at a March rally in Berkeley, California.

Scott Weiner, the California state senator for San Francisco, told USA Today, “I know they’re trying to portray themselves as being against the white supremacists but from what I can tell that claim rings hollow.”

San Francisco police are expected to have an outsize presence at the rally in an attempt to stamp out the kind of violence seen in Charlottesville. All San Francisco officers are supposed to be on duty for the demonstration. Bill Scott, the city’s police chief, told the Los Angeles Times that he expects officers to keep right-wing demonstrators and counterprotesters separated and is looking to last week’s demonstrations in Boston as an example of how authorities can monitor rallies.

“You want to keep the people as peaceful as possible and don’t allow violence to occur,” Scott told the Los Angeles Times on Wednesday. “Violence isn’t going to be tolerated.” That strong hand might be necessary, given that members of the Oath Keepers, a national militia group, are expected to provide security for the rally. Moreover, some protesters are expected to be carrying California concealed-carry permits for their firearms; while they will not be allowed to bring guns inside the area permitted for the demonstration, they can do so outside the permitted area.

Counterprotest: More than a dozen counterdemonstrations and marches are expected to take place this weekend, some at Crissy Field, others elsewhere in the city. City officials will hold a “counter-rally” outside of City Hall at noon on Friday and are encouraging residents to attend a block party at Civic Center on Saturday.

Meanwhile, a local chapter of the International Longshore and Warehouse Union and a coalition of lefty groups known as “San Francisco Against Hate” are also expected to march to Crissy Field as early as 10 a.m. Elsewhere, a march is planned from Harvey Milk Plaza in San Francisco’s Castro District to the city’s Civic Center at noon, along with a mobile dance rally from Dolores Park to the Civic Center.

“The shameful, anti-American trend of hate-filled extremist rallies will unfortunately be allowed to continue this weekend in our city,” Lee said in a statement. “Let us show this nation that San Francisco is a city of peace and unity. Do not engage with the members of this group, whose only priority is to incite violence through divisive rhetoric.”

Hoodline has collected information on more than a dozen events, check it out here.

The following day, on Sunday, August 27, an estimated 300 people are supposed to descend on an anti-communist rally, known as “No to Marxism in America,” in Berkeley’s Martin Luther King Jr. Civic Center Park. The online event’s organizer, Amber Cummings, recently decried white nationalists and called for nonviolent demonstrations; she posted on Facebook, “I myself am a transsexual female who embraces diversity and loves diversity. This event is not a event of hate speech.” Even still, politicians and city officials have expressed concern that the rally could attract far-right agitators, particularly as the location was the site of clashes between right-wing groups and counterdemonstrators earlier this year.

Berkeley Mayor Jesse Arreguin wrote in a statement last week that the rally, largely organized on Facebook, had not been approved by the city, adding that no permit had been requested or granted. “Put simply, past incidents at Civic Center Park have resulted in significant violence as agitators use the cover of peaceful protesters to attack others, including through the use of explosives,” Arreguin wrote in a separate blog post, alluding to demonstrations in April that turned violent.

In response, the City Council last week approved an emergency resolution that gives the city manager more authority to impose rules on unauthorized events and grants police the power to seize weapons from demonstrators if the rally goes beyond the park. (In other cities like Charlottesville, protesters openly carrying weapons have complicated skirmishes during rallies, making them harder for law enforcement to contain. But California is one of three states and the District of Columbia that generally bar people from openly carrying firearms.)

Meanwhile, Berkeley police will receive assistance from Alameda County Sheriff’s Office and other law enforcement agencies during the demonstrations. Alameda County Sheriff Greg Ahern told Reveal last week that officers will work in groups and move from place to place to stamp out areas where they think possible violent activity and property damage might arise.

“We expect extremist groups from all walks of life representing all different points of view,” Ahern told Reveal. “We’re going to do our best to keep the groups separate.”

At a press conference on the steps of Berkeley City Hall on Tuesday, state and local officials condemned hate and called for peace ahead of the planned rallies.

“The planned demonstration by white supremacists represents a fundamental challenge to our community values regardless of how organizers characterize it,” Rep. Barbara Lee said. “Not on our watch are we going to allow hatred and bigotry to permeate our communities.”

Counterprotests: Several are planned, including one known as “Bay Area Rally Against Hate,” which is slated to begin at 10:30 a.m. at the Crescent Lawn on UC-Berkeley’s campus. Another, “Resist Racist Violence & Hate in Berkeley,” will be a march from Ohlone Park to Berkeley City Hall.

On Facebook this week, Arreguin has been pushing a city-wide campaign known as “Berkeley Stands United Against Hate,” encouraging residents to go to other events around the city and show that “intolerance, bigotry and racism have no place in our town.” On Wednesday, he urged people not to go to Civic Center Park in the interest of safety. “While I understand people’s strong desire to speak out against racism, bigotry and white supremacism, past alt-right rallies in the park have resulted in violence and we do not want people to be in a dangerous situation,” he wrote on Facebook.