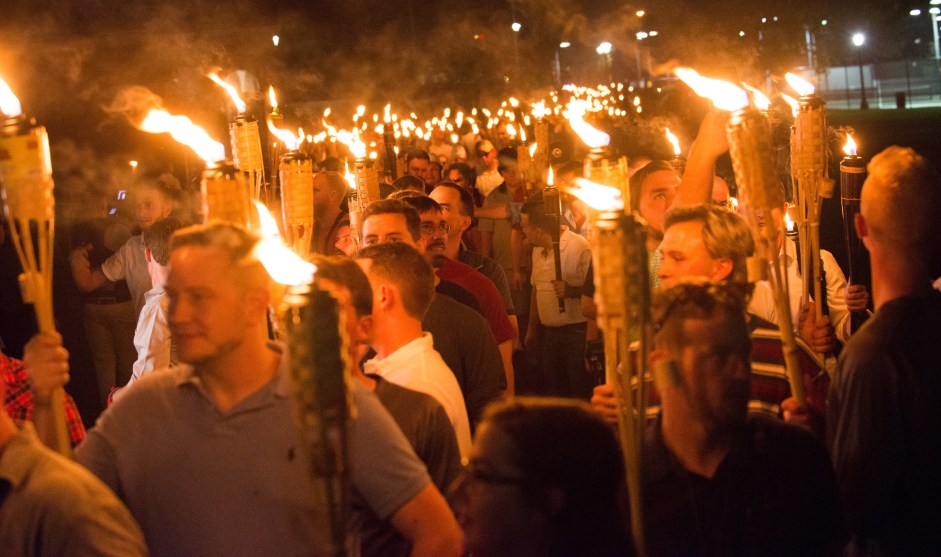 When President Donald Trump remarked that “some very fine people” were among the white supremacists who provoked chaos and violence in Charlottesville the second weekend of August, he set off outrage across the political spectrum. According to multiple law enforcement leaders and security experts I’ve spoken with, Trump’s response to a neo-Nazi’s lethal car attack on a crowd of protesters in the Virginia college town also poured fuel on a long-simmering threat of far-right violence in America.

“He said he loves us all,” Andrew Anglin, the founder of the neo-Nazi site The Daily Stormer, wrote after Trump initially blamed “many sides” for the carnage. Anglin specifically hailed Trump for ignoring media questions about his white nationalist supporters: “When asked to condemn, he just walked out of the room. Really, really good. God bless him.”

The white supremacist Richard Spencer, who participated in the Charlottesville rally, said he was “really proud” of Trump’s equivocating response. He mocked the president’s more canned condemnation of far-right hate groups the next day as “‘kumbaya’ nonsense,” declaring that “only a dumb person would take those lines seriously.” Within 24 hours, Trump reverted to pointing a finger at the “alt-left.”

Then, in an acid campaign-style speech in Phoenix on Tuesday night, Trump launched into a half-hour-long tirade aimed at rewriting the story of how he handled the Charlottesville crisis. In his recounting, he lashed out at the “sick” news media and excised all of his previous remarks blaming the political left. He mocked “anarchists” and “antifa,” and he warned a fervent, predominantly white audience that “they are trying to take away our history and our heritage.”

“There are real concerns about where it leads the country,” a high-level US security official said of Trump’s response to the attack. “More of this stuff seems possible.”

Trump’s actions have only deepened concerns among US law enforcement and other security leaders I’ve spoken with since the car attack 10 days ago that left one person dead, as many as 30 others injured, and the nation’s politics in fresh turmoil.

One senior US law enforcement official with expertise in mass attacks called the events in Charlottesville “very disturbing”—pointing in particular to the weaponized vehicle, a tactic previously associated with ISIS terrorists. Though careful to say that the problem remains limited in scope and on the fringe, this official told me that in recent months concerns have escalated about potential violence from far-right extremists monitored by law enforcement, including neo-Nazi, KKK, and certain militia groups. (The official declined to specify which ones.)

Another high-level US security official confirmed that law enforcement leaders see a rising danger from the far right. Trump’s response “has been hard to view as anything other than a disaster,” this official told me. “There are real concerns about where it leads the country. More of this stuff seems possible.”

Trump’s actions came atop his administration’s apparent policy of turning a blind eye to far-right terror. In media appearances just days prior to Charlottesville, deputy assistant to the president Sebastian Gorka emphasized an exclusive focus on radical Islamic terrorism and heaped scorn on a New York Times reporter for mentioning the white supremacist threat, which in recent years has resulted in multiple instances of horrific bloodshed. “It’s this constant, ‘Oh, it’s the white man. It’s the white supremacists. That’s the problem.’ No, it isn’t, Maggie Haberman,” said Gorka, whose alleged long-standing ties to a violent fascist movement in his native Hungary recently were exposed by investigative journalists.

“This idea they’ve pushed about only focusing on radical Islamic terrorism is foolish and naïve.”

The Trump administration reportedly has also sought to repurpose the Department of Homeland Security’s Countering Violent Extremism program to focus only on the radical Islamic threat while cutting programs aimed at deradicalizing neo-Nazis and their ilk—in part through the efforts of Gorka’s wife, also a Trump aide. Never mind that the FBI reportedly stopped another would-be Oklahoma City bomber—a self-identified “Three Percenter”—the very day of Charlottesville.

“This idea they’ve pushed about only focusing on radical Islamic terrorism is foolish and naïve,” a former law enforcement leader based in Virginia told me. During the Obama administration, he said, there was a surge in white supremacist activity, but it was largely threats and not much action. “With Charlottesville,” he said, “especially with the use of the car, there’s worry about more of it going beyond talk.”

As I documented earlier this year, Trump has a long record of downplaying—if not downright ignoring—right-wing terror. The latest example may have come with the bombing of a mosque in Minnesota on August 5, which Trump didn’t utter a word about. The identity or motive of the perpetrator remain unclear, though that didn’t stop Gorka from speculating without any evidence that the attack might have been a leftist ruse.

In a letter sent on Friday, Sen. Pat Leahy of Vermont and 23 of his Democratic colleagues sought answers as to why the Trump administration appears uninterested in protecting Americans from far-right extremism. “As our nation confronts the problem of growing racial, religious and even political hatred, we are concerned that the Department of Homeland Security may not be adequately addressing one of the most significant threats of domestic terrorism,” they wrote.

Forty-two percent of Americans surveyed think Trump’s response to Charlottesville has given white supremacists and neo-Nazis “equal standing” with those who oppose them.

Back in May, a joint intelligence bulletin from the FBI and DHS stated that white supremacists were responsible for more attacks than any other domestic extremist group over the past 16 years and warned that they were likely to carry out more attacks in the coming year. And a recent analysis of terror attacks from the libertarian CATO Institute concluded that, since 1992, far-right extremists have killed about 10 times as many Americans as far-left extremists have.

Yet, Trump’s response to Charlottesville appears to have had a disturbing effect.

A Washington Post-ABC News poll completed on Sunday found that 42 percent of Americans believe Trump’s handling of the crisis has given white supremacists and neo-Nazis “equal standing” with those who oppose them. And about 9 percent of those surveyed—which would translate to roughly 29 million Americans—said they thought white supremacist or neo-Nazi views were to some degree “acceptable.”

It may be that Trump’s actions, as during his presidential campaign, have continued to nurture hateful far-right politics—and the violence that inevitably follows.