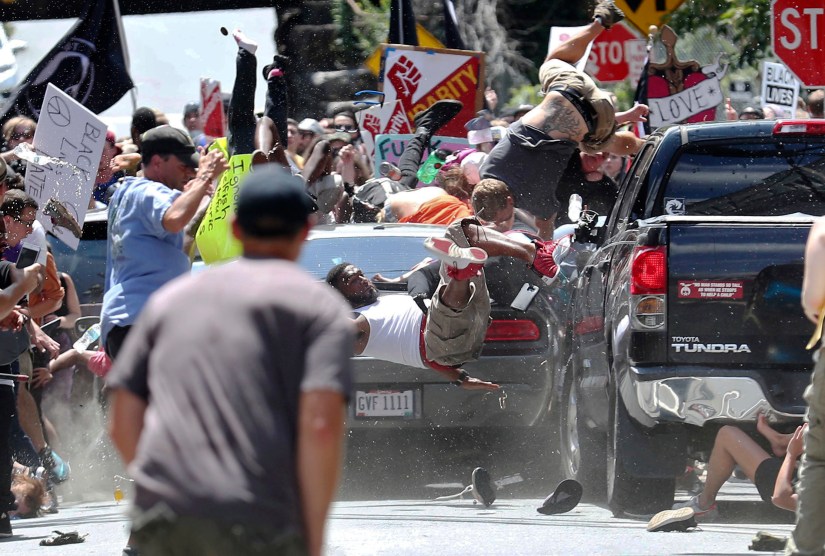 People fly into the air as a vehicle drives into a group of protesters demonstrating against a white nationalist rally in Charlottesville, Va., Saturday, Aug. 12, 2017. The nationalists were holding the rally to protest plans by the city of Charlottesville to remove a statue of Confederate Gen. Robert E. Lee. There were several hundred protesters marching in a long line when the car drove into a group of them. (Ryan M. Kelly/The Daily Progress via AP)Ryan M. Kelly/AP

CHARLOTTESVILLE, Va.—There was nothing haphazard about the violence that erupted today in this bucolic town in Virginia’s heartland. At about 10 a.m. today, at one of countless such confrontations, an angry mob of white supremacists formed a battle line across from a group of counter-protesters, many of them older and gray-haired, who had gathered near a church parking lot. On command from their leader, the young men charged and pummeled their ideological foes with abandon. One woman was hurled to the pavement, and the blood from her bruised head was instantly visible.

Standing nearby, an assortment of Virginia State Police troopers and Charlottesville police wearing protective gear watched silently from behind an array of metal barricades—and did nothing.

It was a scene that played out over and over in Charlottesville as law enforcement confronted the largest public gathering of white supremacists in decades. We walked the streets beginning in the early morning hours and repeatedly witnessed instances in which authorities took a largely laissez faire approach, allowing white supremacists and counter-protesters to physically battle.

Officials in Charlottesville had publicly promised to maintain control of the “Unite the Right” rally, which is the latest in a series of chaotic and bloody racist rallies that have roiled this college town, a place deeply proud of its links to Thomas Jefferson and the origins of American Democracy.

But the white supremacists who flooded into the city’s Emancipation Park—a statue of Confederate General Robert E. Lee sits in the center of the park—had spent months openly planning for war. The Daily Stormer, a popular neo-Nazi website, encouraged rally attendees to bring shields, pepper spray, and fascist flags and flagpoles. A prominent racist podcast told its listeners to come carrying guns. “Bring whatever you need, that you feel you need for your self defense. Do what you need to do for security of your own person,” said Mike “Enoch” Peinovich on The Right Stuff podcast.

And the white supremacists who showed up in Charlottesville did indeed come prepared for violence. Many wore helmets and carried clubs, medieval-looking round wooden shields, and rectangular plexiglass shields, similar to those used by riot police.

Clad in a black, Nazi-style helmet, Matthew Heimbach told ProPublica, “We’re defending our heritage.” Heimbach, who heads the Traditionalist Workers Party, a self-declared fascist group, said he was willing to die for his cause and would do whatever it took to defend himself. He was surrounded by a brigade of white supremacists, including members of the League of the South and the National Socialist Movement.

By the time Heimbach and his contingent arrived in downtown Charlottesville shortly before 11 a.m., what had started hours earlier with some shoving and a few punches had evolved into a series of wild melees as people attacked one another with fists, feet, and the improvised weapons they’d brought with them to the park. White supremacists and anti-racists began blasting each other with thick orange streams of pepper spray.

The police did little to stop the bloodshed. Several times, a group of assault-rifle-toting militia members from New York State, wearing body armor and desert camo, played a more active role in breaking up fights.

Shortly before noon, authorities shut down the rally and the related demonstrations and marched the white supremacists out of the park and into the streets.

Charlottesville Vice Mayor Wes Bellamy defended the police tactics. “I’m not in the business of throwing our police department under the bus, because they’re doing the best job they can, ” said Bellamy. “I don’t think the police officers were just twiddling their thumbs.”

The skirmishes culminated in what appears to have been an act of domestic terrorism, with a driver ramming his car into a crowd of anti-racist activists on a busy downtown street, killing one and injuring 19 according to the latest information from city officials. Charlottesville authorities tonight reported that a 20-year-old Ohio man had been arrested and had been charged with murder.

At a brief press conference this evening, Virginia officials declined to answer questions about the police response, but said they were not taken surprise by the violence or the number of protesters. “This could have been a much worse day,” said Virginia Gov. Terry McAuliffe, “We planned for a long time for today’s incidents.”

Charlottesville police Chief Al Thomas said at least 35 people had been injured—many of them from violent encounters between white supremacists and the counter-protesters. He said nobody had been wounded due to confrontations between police and the public.

In the weeks leading up to the protest, city and state officials put together a detailed plan for the rally, mobilizing 1,000 first responders, including 300 state police troopers and members of the National Guard. Judging from how events unfolded today, it appears that the strategy was to avoid direct confrontations with the protesters.

Miriam Krinsky, a former federal prosecutor who has worked on police reform efforts in Los Angeles, said it was too early to assess the law enforcement response in Charlottesville.

But she said a strategy of disengagement generally works to embolden unruly crowds.

“If things start to escalate and there’s no response, it can very quickly get out of control,” she said. “Individuals can and will get hurt.”

But an overly forceful response, she said, can also make the situation worse. Krinsky said attempts to seize weapons might have led to more clashes between police and protesters. “Trying to take things away from people is unlikely to be a calming influence,” she told ProPublica.

A good strategy, she said, is to make clashes less likely by separating the two sides physically, with officers forming a barrier between them. “Create a human barrier so the flash points are reduced as quickly as possible,” she said.