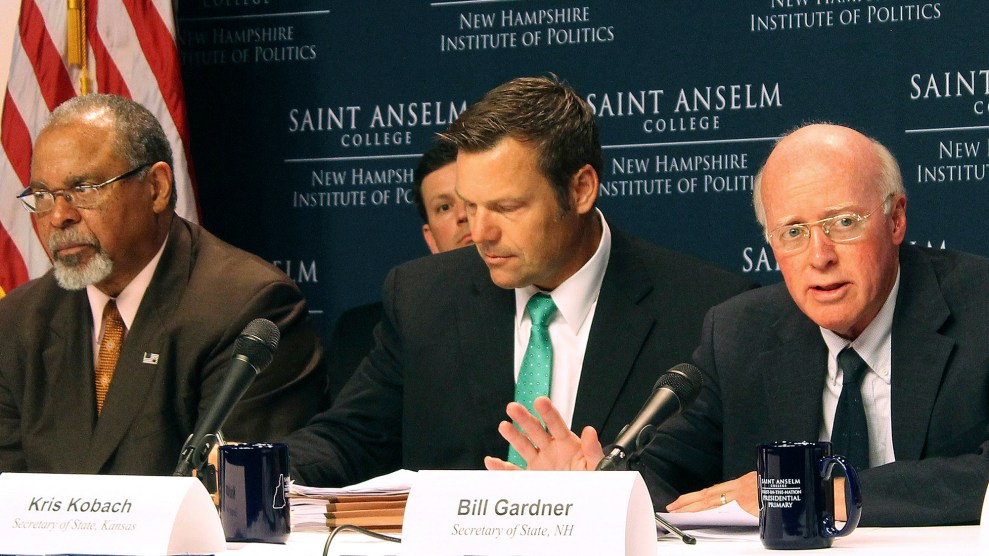 There are about 33,000 gun deaths each year in America. Between 2000 and 2014, there were just 31 documented cases of voter impersonation. But as President Donald Trump’s election integrity commission kicked off its second meeting on Tuesday, a conservative economist suggested that voters be subject to the same background check as gun purchasers in order to assuage Republican concerns about voter fraud.

John Lott Jr., who specializes in research on gun ownership and crime, was invited by the commission to speak at the meeting in New Hampshire. The witness list is as controversial as the commission itself, whose roster of voter fraud fear-mongers has sparked concerns that they will use the commission to push reforms that make it harder to vote. All of the witnesses at Tuesday’s meeting are white men, and they include former Justice Department staffers under George W. Bush who have pushed strict voter ID laws and purges of voter rolls.

But nothing in the meeting’s morning session was as explosive as Lott’s proposal. He said the background check system run by the Bureau of Alcohol, Firearms, and Tobacco is well suited to check whether voters are eligible to cast a ballot because it checks for such things as citizenship and criminal history. But the qualifications for purchasing a firearm are much more stringent than those for voting. The National Instant Criminal Background Check System (NICS) screens such things as criminal history, dishonorably military discharges, and mental health or substance abuse issues. Not only could NICS erroneously flag someone as ineligible to vote, it could also deter people from voting who are distrustful of law enforcement and want to stay away from a criminal background check. And background checks cost money, which would have to be paid by the voter or the state.

Maine Secretary of State Matthew Dunlap, a Democratic commission member, challenged the background check idea, noting that NICS was never intended to be used for election purposes. But Lott pushed back, saying that since Democrats liked the system for gun purchases, he saw no reason for them to oppose using the system on voters. “It’s the same things that disqualify you from owning a gun that disqualify you from voting,” Lott insisted. Commissioner Christy McCormick, a Republican member of the Election Assistance Commission, which assists states with election administration, said the background check idea was interesting. (After the session, Dunlap told ProPublica‘s Jessica Huseman that the idea is “ridiculous” and he initially thought Lott was joking. Kenneth Blackwell, a Republican commissioner, also told Huseman he opposed the idea.)

Lott is not new to controversy. His studies suggesting that increased gun ownership reduces crime have been touted by the National Rifle Association for two decades. Fellow academics have questioned his findings, and David Hemenway, the director of the Harvard Injury Control Research Center, has called his conclusions “erroneous.”

“From the perspective of a voter, imagine having to go through the federal bureaucracy of getting a background check cleared before voting,” says David Becker, executive director of the Center for Election Innovation and Research. “The process is a disaster as envisioned.”

Lott himself has said that background checks for gun purchases “only makes life easier for criminals” and that the background check databases are “rife with errors,” raising questions about why he’d want to use such a system for voting. His recent writings suggest that his idea might be more about embarrassing Democrats than serious policy. “Applying the NICS background checks to voting would undoubtedly elicit a long list of other concerns from Democrats about how the system interferes with people’s right to vote,” he wrote in the Chicago Tribune on Monday. “The debate could prove quite embarrassing for Democrats. Will they finally admit to the double standard? They are very concerned about getting poor people’s votes, but they want to make it difficult for poor people to defend themselves.”

In his presentation to the commission, Lott said that according to his own research, voter ID requirements increase turnout and do not have a disproportionate effect on minority or poor voters, as other studies have found. A 2014 study by the Government Accountability Office concluded that strict voter ID laws in Kansas and Tennessee reduced turnout by 2 to 3 percent, with the largest drops among young voters, new voters, and African Americans.