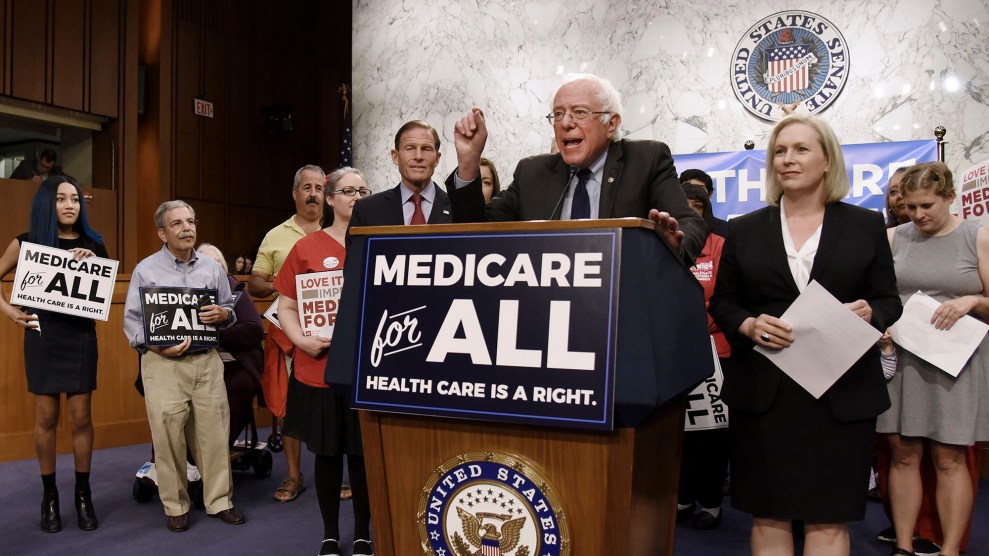 Medicare for All is officially en vogue among Democrats angling for national attention. With Republicans’ efforts to repeal Obamacare flailing, progressives have gone on offense, focusing on their own aspirations for the nation’s health care system. And a growing number of elected Democrats are lining up behind a single-payer plan that is far more ambitious than anything enacted by President Barack Obama.

“As proud Americans, our job is to lead the world on health care, not to be woefully behind every other major country.”

On Wednesday afternoon, Sen. Bernie Sanders (I-Vt.) introduced an ambitious proposal to transition the country away from a system of private health insurance, with the government instead offering a beefed up version of Medicare to every person in the country. “Health care in American must be a right, not a privilege,” Sanders said. ‘Today, we begin the long and difficult struggle to end the international disgrace of the United States, our great nation, being the only major country on earth not to guarantee health care to all of our people. As proud Americans, our job is to lead the world on health care, not to be woefully behind every other major country.”

Sanders’ plan would be phased in over four years. In the first year, everyone 18-years-old and younger could enroll in Medicare, as could anyone 55-years-of-age or older. That upper threshold would slowly be lowered so that four years out, everyone in the country would be eligible for Medicare, with every American receiving a new Medicare card guaranteeing them coverage.

And this new Medicare would be far more generous than the current Medicare offered to seniors (and more generous than most international single-payer systems, as well). It would require no copays or deductibles, and it would offer almost the full range of medical services, from hospitalization and drugs to vision and dental. The bill would, essentially, end most private-sector spending on health care.

Sanders’ legislation would also put an end to the federal government’s ban on funding abortions, and it would include abortion coverage in its package of covered health care. “The senator’s work to draft this legislation is a groundbreaking advancement for a simple truth: we will never solve our health care crisis until women have full access to reproductive services,” NARAL Pro-Choice America’s President Ilyse Hogue said in a statement.

Sanders, who ran for the 2016 Democratic presidential nomination but has never joined the party, unveiled his new bill with substantial support from Democratic senators. Sixteen of his colleagues have already signed on as cosponsors, and the event rolling out the bill on Wednesday served as a quasi-cattle call for Democrats thinking about running for president in 2020. Sens. Cory Booker (N.J.), Kirsten Gillibrand (N.Y.), Kamala Harris (Calif.), and Elizabeth Warren (Mass.) all took their turns at the mic to boost Bernie’s plan.

“We have to remember,” Warren said, “the only reason we are here is because millions of people across this country made their voices heard. They believe health care is a basic human right worth fighting for, and that’s why we’re here today.” Warren, who was a law professor focussing on bankruptcy before entering politics, touted Medicare for All as a way to put an end to mammoth health care bills that can drive families into financial ruin. “Everyone gets covered, no one goes broke,” she said. “And families, in some of the toughest moments in their lives, will not be left alone.”

It’s clear that Democrats with future national aspirations are no longer worried about the politics of supporting single payer. But part of the reason Sanders managed to garner so much support might be the fact that his bill largely avoids grappling with one of the key challenges posed by single payer: how you pay for it. The legislation spells out the benefits that Americans would receive—fully universal care, no copays—without diving into how the government would fund such a massive program.

Sanders’ office released a paper Wednesday afternoon discussing a few possible options for paying for Medicare for All, but he didn’t settle on one plan. Options ranged from a 4-percent income-based premium (that would exclude low-income families and take in $3.5 trillion over 10 years) to a wealth tax on the 0.1 percent ($1.3 trillion in revenue over 10 years) to a 7.5 percent payroll tax on employers ($3.9 trillion over 10 years). The policy paper also pointed to the possible savings that could be found in single payer, with up to $500 billion per year in reductions of administrative costs and up to $113 billion if the government negotiated drug prices with pharmaceutical companies.

“In my view, there needs to be vigorous debate as to the best way to finance our Medicare for All legislation,” the paper from Sanders’ office says. “Unlike the Republican leadership in Congress which held no hearings on their disastrous bill which would have thrown 32 million off of health insurance and dealt with one-sixth of the American economy, it is our intention to get the best ideas we can from economists, doctors, nurses, and ordinary Americans.”

Read a summary of the bill from Sanders’ office: