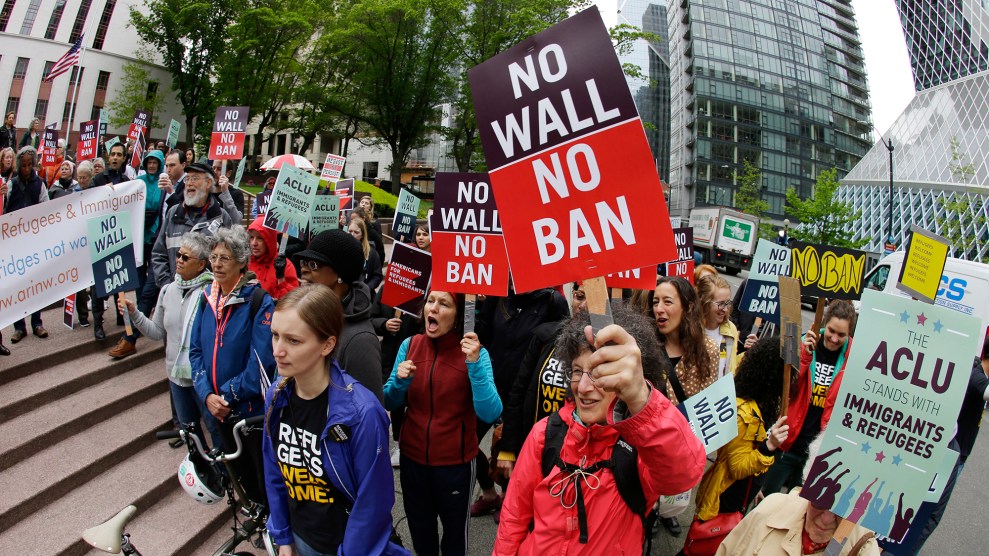 President Donald Trump announced a revised version of his travel ban on Sunday, a policy that can be traced back to his campaign pledge to ban all Muslims from entering the United States. The new entry restrictions come as a 90-day ban on entry by nationals of six Muslim-majority nations expires this weekend and will apply to residents of eight countries—some of which are not Muslim-majority nations—but travel restrictions will vary depending on an assessment of risk posed by each country.

The proclamation, which will go into effect on Oct. 18, expands the list of countries to include residents from the following countries: Iran, Libya, Somalia, Syria, Yemen, Chad, Venezuela and North Korea. Chad, North Korea, and Venezuela were not part of the previous orders, but the restrictions to Venezuela will apply to government officials, according to the order. Sudan, which was included in the original travel ban, was removed from the list.

White House officials told the Washington Post that the order would be phased in over time. Unlike the previous orders, Sunday’s proclamation is meant to be in place indefinitely. Restrictions may be removed from countries if they meet a new set of minimum standards, according to the New York Times. One senior official insisted to the Post that the restrictions “either previously or now were never, ever ever based on race, religion, or creed,” adding that the governments included “are simply not compliant with our basic security requirements.”

“Following an extensive review by the Department of Homeland Security, we are taking action today to protect the safety and security of the American people by establishing a minimum security baseline for entry into the United States,” President Trump said in a White House press release Sunday night. “We cannot afford to continue the failed policies of the past, which present an unacceptable danger to our country. My highest obligation is to ensure the safety and security of the American people, and in issuing this new travel order, I am fulfilling that sacred obligation.”

The stated purpose of the original ban was to allow the federal government to marshal all its resources to complete a review of worldwide visa vetting procedures so that any necessary, permanent changes to entry requirements could be put in place. The Department of Homeland Security completed its review and the administration’s new guidelines are based on its recommendations.

Trump announced the first version of his travel ban a week after his inauguration, sparking chaos at airports and mass protests across the country. The first executive order placed a 90-day ban on entry from nationals of seven Muslim-majority nations and a 120-day ban on all refugees entering the US. That ban was immediately blocked by a federal court, prompting Trump to revise the ban in March. The second version applied to six Muslim-majority countries and removed an explicit preference for Christian minorities coming to the US.

This spring, the legal challenges to the ban continued, with opponents arguing that the ban is a thinly-veiled attempt to implement the Muslim ban Trump promised on the campaign trail. District court judges in Hawaii and Maryland both blocked the entry ban for people from Iran, Libya, Somalia, Sudan, Syria, and Yemen from going into effect. The judge in Hawaii also blocked the 120-day ban on refugees entering the country. The 4th Circuit Court of Appeals and the 9th Circuit Court of Appeals largely upheld those rulings. In his majority opinion for the 4th Circuit, the court’s chief judge wrote that the travel ban “drips with religious intolerance, animus, and discrimination.” The cases reached the Supreme Court in June, and the court allowed a limited version of the ban to take effect. That 90-day ban expired this weekend.

The new regulations will impact the legal challenge, although it is unclear exactly how. The Supreme Court  is scheduled to hear oral arguments in the case on October 10.