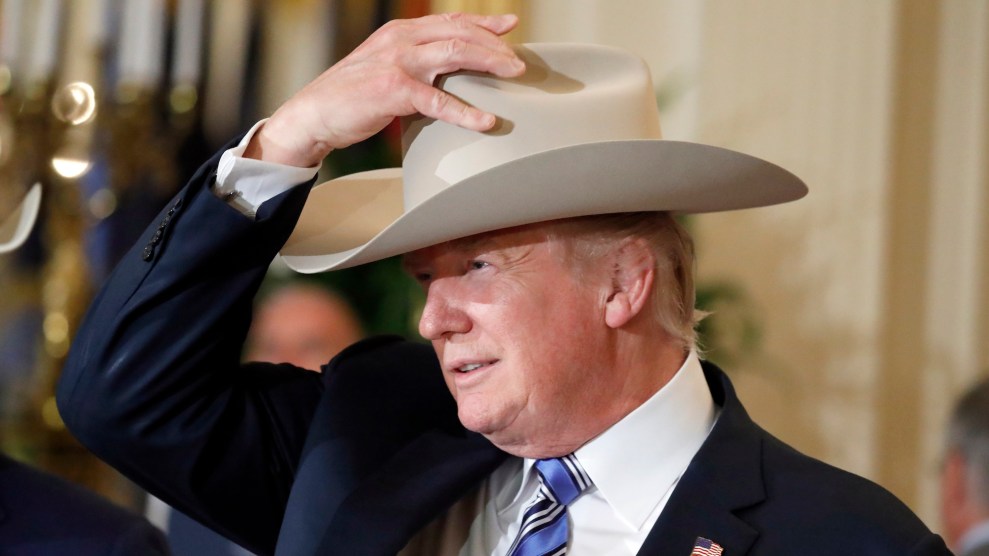 President Donald Trump tries on a Stetson hat in July as part of "Made in America" week.Alex Brandon/AP

Both Democrats and Republicans love to sell tax cuts with the same simple message: It will help the middle class. President Donald Trump has been no exception. Just last week, he said the “rich will not be gaining at all” under Republicans’ forthcoming plan to rewrite the country’s tax code. “We’re looking for the middle class and looking for jobs,” Trump said before adding, “jobs meaning companies.”

That addition is telling. The White House and Congressional Republicans are working in secret on a major restructuring of how the US collects taxes, and while the details remain unknown, all the signs suggest Republicans’ plan will deliver massive benefits to America’s largest corporations. The White House has proposed cutting the corporate tax rate from 35 percent to 15 percent, which the liberal Center for Budget and Policy Priorities (CBPP) found would cost the government more than $2 trillion over 10 years. House Speaker Paul Ryan (R-Wisc.) said earlier this month that Republicans are now aiming to reduce the corporate rate to the 20 percent range.

Initially, Ryan and Senate Majority Leader Mitch McConnell (R-Ky.)—both longtime budget hawks—wanted to avoid cutting government revenue. That doesn’t look likely anymore. Senate Republicans on the budget committee now favor cutting taxes by $1.5 trillion over the next 10 years, the New York Times reported on Tuesday. The nonpartisan Committee for a Responsible Federal Budget said the cuts could result in the national debt exploding, with the country owing as much debt as the entire output of the US economy in just over a decade. Maya MacGuineas, the group’s president, said in a statement that the “debt-dependent approach to tax reform flies in the face of the fiscal discipline so many members of the Budget Committee have voiced concern about in the past.”

The Republican plan reportedly will be released sometime next week, though the Trump administration and Congressional allies have a habit of blowing past self-imposed deadlines. But whenever the plan becomes public, you can expect that lowering corporate taxes will be at the center of Trump’s plan.

Below are five misleading claims you’re likely to hear when that happens.

Proponents of cutting corporate taxes like to point out that the United States’ 35 percent corporate tax rate is the highest in the developed world. But ignore the sticker price; what matters is what corporations actually pay. In 2014, the nonpartisan Congressional Research Service found that the US’ effective tax rate—the share of profits companies hand over to the government—was about the same as in other large economies. For taxes on profits created by new investments, the effective rate in the US is 24 percent, compared to 21 percent in other G-7 industrialized nations, according to the Treasury Department.

And then there are the companies that pay far less than the average—or sometimes nothing at all. Earlier this year, the left-leaning Institute on Taxation and Economic Policy found that eighteen profitable Fortune 500 companies, including General Electric and Priceline, had paid no federal corporate taxes from 2008 to 2015.

Myth #2: High corporate taxes are holding back the middle class.

At a Senate hearing on Tuesday, Sen. Orrin Hatch (R-Utah) argued that US businesses are increasingly less competitive because of the corporate tax rate. The status quo, he said, was hurting the middle class by blocking wage and productivity growth. That is hard to square with the fact that corporate profits have more than doubled since the recession and are now near-record highs.

Even if you accept the theory that corporations are struggling, there isn’t much reason to believe boosting their profits would help the middle class. The nonpartisan Tax Policy Center estimates that 70 percent of cuts in the corporate taxes goes to the top fifth of households, with more than a third of the benefits from a cut going to the top one percent.

Many business owners set up their companies using “pass-through” structures such as LLCs. Under this part of the tax code, profits are taxed as individual, instead of corporate, income. Trump runs about 500 pass-through companies, according to his lawyers. Trump has proposed cutting the top tax rate for pass-through income from 39.6 percent to 15 percent, while House Republicans favor a 25 percent rate for what they call “small business income.” That shift could encourage top-earners to seek huge tax cuts by structuring their salaries as pass-through income.

But just as with individual workers, few owners of pass-through companies make enough to be subject to the top rate, which kicks in after a couple makes more than $466,000. As a result, CBPP found that more than two-thirds of the benefits from a Republican pass-through cut would go to millionaires. Only two percent of households that makes less than $100,000 per year would benefit.

Republicans like to highlight the fact that most developed nations only tax domestic profits, while the United States has a “worldwide” system in which all profits are taxed. The difference is less extreme in practice. Many US companies, for example, avoid paying taxes on foreign profits by parking those earnings overseas. Apple keeps almost of all its roughly $250 billion of cash and investments abroad.

Still, the White House and Congress want to move to a “territorial” system under which only US profits are taxed. Republicans argue that it will lead companies like Apple to return their foreign profits to the United States and invest in infrastructure.

But such a plan would likely have the opposite effect. Eliminating all taxes on foreign profits would create a massive incentive for companies to invest abroad. In addition, CBPP points out that it would be a boon to multinational companies which can shift operations overseas or use legal tricks to shelter profits in foreign tax havens. Small businesses that operate only in the United States would not have that ability.

When Barack Obama was president, Republicans often warned that the deficit was the biggest economic threat to America. Now that they’re in charge of tax reform, they won’t be eager to admit that their plan could add over a trillion dollars of debt. To get around that, they’ll argue that tax reform will lead to a higher level of economic growth than independent experts predict. “Just going from 2 to 3 percent growth adds about $14 trillion of economic activity over a decade, $2 to $3 trillion of revenue to the federal government,” Sen. Ron Johnson (R-Wisc.) told the New York Times this week.

Johnson’s argument isn’t new. Proponents of this idea could look at Kansas Gov. Sam Brownback’s experiment to test their theories. Back in 2012, Brownback said huge state tax cuts, which skewed towards the wealthy, would be “like a shot of adrenaline into the heart of the Kansas economy.” Brownback lowered income tax rates, and zeroed out taxes on pass-through income, but the growth he promised never materialized. After the cuts were enacted, Kansas lagged behind the rest of the country in small business formation and job growth, while depriving itself of money needed for roads and schools. Thousands of businesses popped up as pass-through entities to dodge paying taxes. For years, Kansas tax revenue trailed projections, leaving state lawmakers scrambling to cut programs or tap into rainy day funds to keep the government operating. In June, Brownback’s grand experiment in trickle-down economics came to an end, as the Republican-controlled state legislature overrode Brownback’s veto and repealed many of the cuts.

But Republicans in Washington have not been deterred by the lessons from Kansas. On Wednesday, the Wall Street Journal’s editorial board said it was happy to see Senate Republicans embrace $1.5 trillion of tax cuts, even though $2.5 trillion or more would have been better. Why? Congress’ nonpartisan budget “gnomes” always underestimate the benefits of cutting taxes.