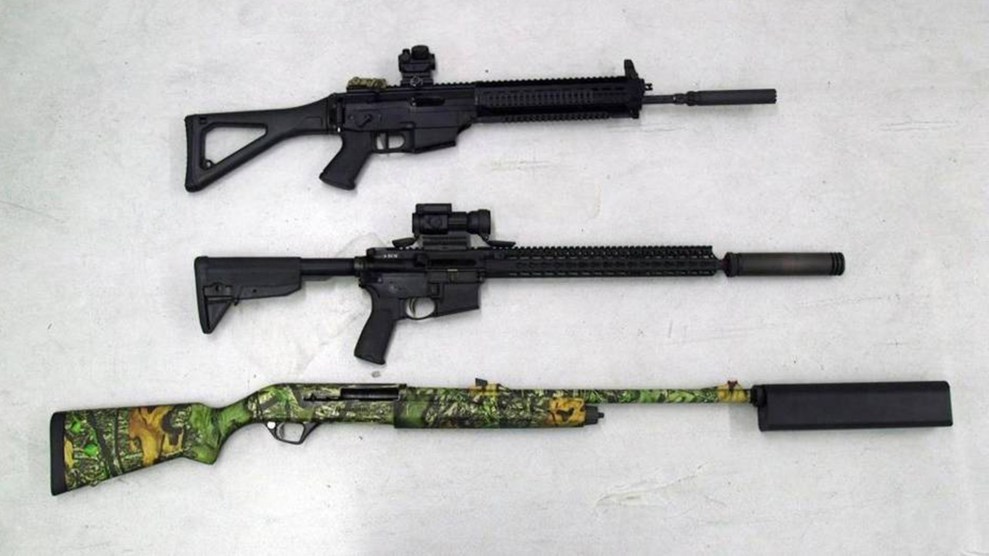 Firearms with silencers at a gun range at NRA headquarters, March 2017Ali Rizvi/ZUMA

Ever since gun silencers were first regulated in the 1930s, they have been used only rarely in violent crimes, with one notable recent exception: In early February 2013, a former police officer using a silencer on a 9mm Glock shot a young couple sitting in their car in what the Police Foundation called a “gang-style hit.” “Not a single neighbor had heard or seen a thing,” the Police Foundation wrote in its report about the beginning of a string of murders committed by Christopher Dorner in Southern California. In “lightning bolt attacks” over the following 10 days, Dorner killed two police officers and wounded several others—including an officer who was shot nine times but survived—and drew a legion of cops into the mountains, where he eventually shot himself to death as they closed in.

Now, a bill known as the Hearing Protection Act that is quietly making its way through Congress proposes to remove silencers from the list of regulated items under the National Firearms Act of 1934. The bill—co-sponsored by Rep. Mo Brooks (R-AL), who narrowly missed getting shot in June when a gunman attacked a congressional baseball practice—would make the purchase of a silencer subject only to an instant background check, or potentially to no regulation at all in states that don’t require background checks for gun sales in private, at gun shows and online.

“There are 300 million firearms out there and [about] 1 million silencers,” a gun industry executive said in June. “That shows you the relative scale of the business opportunity.”

The new legislation “assaults the interests of our nation’s law enforcement officials and threatens our public safety and security,” David Chipman, a retired ATF special agent and senior policy adviser at Americans for Responsible Solutions, said at a recent congressional hearing. “When silencers are used in crime, the results are particularly deadly.”

Donald Trump Jr. has thrown his weight behind the bill: In a 38-minute interview with the CEO of one of the largest gun silencer manufacturers in the nation during his father’s presidential campaign, Trump Jr. argued that the regulation of silencers is just another example of “arbitrary policies by people who don’t know what they’re talking about.” When asked by SilencerCo’s CEO Joshua Waldron whether Trump as president would sign the Hearing Protection Act, Trump Jr. responded: “We would want to go through Congress, we would want to do it the right way, but if you line up those votes, he’s obviously gonna be for it.”

Silencers currently are legally obtainable after submitting an application, passing a background check, submitting fingerprints, paying a $200 fee, and registering the silencer with the Bureau of Alcohol, Tobacco, and Firearms (ATF). Because paperwork must be filed with the overburdened and underfunded agency, wait times can be months-long. The Hearing Protection Act—which House Republicans in June folded into the Sportsmen’s Heritage and Recreational Enhancement Act (SHARE Act), a bi-partisan package that typically passes with little drama—would do away with these hurdles.

Advocates of the bill argue that silencers have no nefarious purpose, but instead improve conditions for hunters and people who use shooting ranges. Silencers “reduce the damage that gunshots do to the shooter in terms of their hearing, and reduce the overall noise impact for everyone,” says Todd Rathner, a gun rights lobbyist and executive director of the NFA Freedom Alliance, which campaigns to roll back restrictions on items regulated by the National Firearms Act. “If firearm sound suppressors were treated the way lawnmowers and chainsaws were treated, they would be required on firearms,” Rathner says, adding that opposition to the gear is “a cynical, knee-jerk political reaction, not one based on knowledge or experience.”

“This proposal would pose an additional threat to law enforcement at a time where officer safety is already at increased risk.”

A recent memo from the Law Enforcement Coalition for Common Sense, signed by more than a dozen current and former law enforcement leaders, argues that deregulating silencers could have “devastating effects” on public safety and the safety of law enforcement officers. “Silencers mask the sound of a gun, changing the sound into one not easily recognized as gunfire,” the memo says. “As a result, assassination-style murders become easier, and bystanders may not know to alert first responders…This proposal would pose an additional threat to law enforcement at a time where officer safety is already at increased risk.”

The push for the bill may also be an effort to boost a potentially lucrative revenue stream for the gun industry, which has been hurting since the presidential election—a phenomenon dubbed the “Trump Slump.” (The gun industry enjoyed record sales under the Obama administration and experienced spikes amid predictions that Hillary Clinton would win the 2016 election. But when Trump won, and fears of a massive “gun confiscation” could no longer be so easily stoked, the urgency to stock up on firearms and accessories dissipated.) A month after Trump’s inauguration, SilencerCo, the nation’s largest manufacturer of gun suppressors, was reportedly forced to lay off approximately 50 percent of its workforce.

“Sales have declined to the degree where…many silencer companies are fearing for their business,” Phil Sansotta, online marketing manager for silencer manufacturer GEMTECH, told Task & Purpose. “Right now, everyone is trying to weather the storm.”

Still, industry leaders see a lucrative market that could be unlocked by the legislation: In an interview with the Salt Lake Tribune in June, SilencerCo President Jason Schauble said, “There are 300 million firearms out there and [about] 1 million silencers. That shows you the relative scale of the business opportunity.”

Rep. Brooks, who is also pushing legislation that would allow lawmakers to carry sidearms, once said his reasons for carrying a gun are because of “terrorism” and “crime” and that “you never know when either one is going to happen.” Several hours before the silencer bill’s first scheduled hearing on June 14, Brooks was practicing baseball with other Republican members of Congress on the outskirts of Washington D.C. when a gunman, James Hodgkinson, approached from a nearby YMCA where he’d been laying in wait and opened fire. Brooks was on deck to bat when he heard “a loud blam,” he told CNN. “And I look around and behind third base, in the third base dugout, which is cinder blocks, I see a rifle and a little bit of a body, and then I hear another blam, and I realize there is an active shooter.”

Brooks ran, and soon was taking cover on the ground with two or three others as the gunfire continued. I hear a break in the gunfire and decided to take a chance and ran to the dugout, which is…cinder block and down about 2 or 3 feet.”

By the end of the attack, two congressional aides, two police officers, and House Majority Whip Steve Scalise had been shot. Thankfully none were killed. (Law enforcement officers responding to the attack shot and killed Hodgkinson.)

What more damage might have been done that day, had Hodgkinson used a silencer?

Brooks and the other backers of the Hearing Protection Act apparently are unconcerned with that question. On September 12, the House Committee on Natural Resources held a hearing on the SHARE Act and issued final markups. Proponents expect a House floor vote soon, and they expect the legislation to pass.