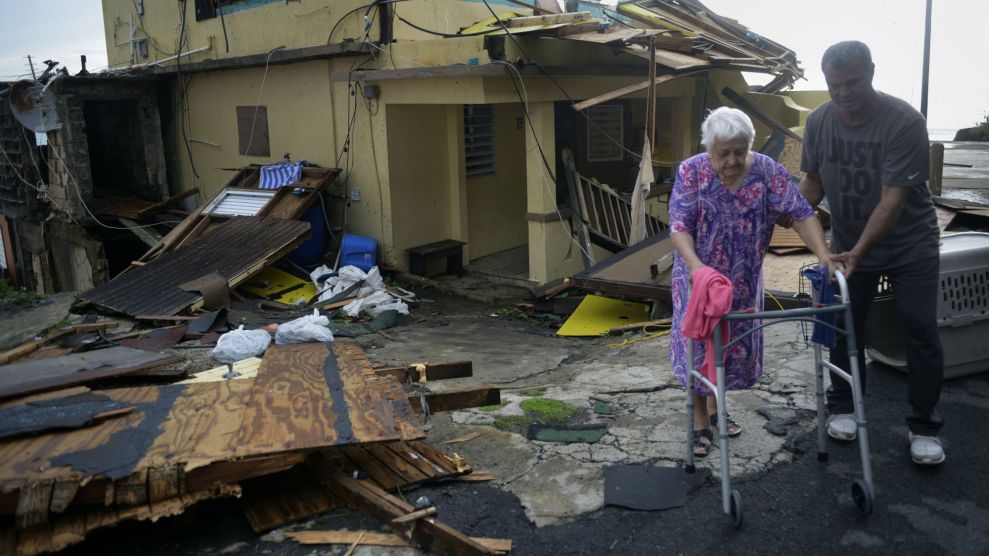 Update, 9/28: Amid mounting outrage, the Trump administration announced Thursday it has authorized a waiver for the Jones Act.

At @ricardorossello request, @POTUS has authorized the Jones Act be waived for Puerto Rico. It will go into effect immediately.

The Department of Homeland Security and the White House are currently under immense pressure to provide quick disaster relief to Puerto Rico, but many people—including a number of members of Congress—are arguing that one of the biggest obstacles to doing so is a nearly century-old law known as the Jones Act.

The Department of Homeland Security is currently keeping the law—which requires all goods shipped between two US ports to travel on US-built ships that are manned by US crews—in place, arguing there simply isn’t a reason to lift it.

“Things could change, but our current assessment is that a waiver is not needed,” DHS spokesman David Lapan said in an email to Mother Jones Wednesday afternoon.

The Jones Act was written after World War I and is designed to protect the American shipping industry and to provide the military with shipping and crew backup in times of national defense. According to the text of the law, a waiver can only be granted if one of two things happens: either the Secretary of Defense can request a waiver in “the interest of national defense,” or the head of the agency in charge of administering the Jones Act—which is now DHS—can make a determination that there aren’t enough US ships to meet the needs in “the interest of national defense.”

Because DHS has neither deemed a waiver necessary nor has it received a request from Secretary of Defense James Mattis, reports suggesting that DHS has denied a request for a Jones Act waiver for Puerto Rico “are wrong,” Lapan insists. And, he adds, the “Jones Act isn’t preventing us from moving goods by sea to Puerto Rico.”

“Based on consultation with other Federal agencies, DHS’s current assessment is that there is sufficient numbers of US-flagged vessels to move commodities to Puerto Rico,” Lapan says. “The limitation is going to be port capacity to offload and transfer cargo, not vessel availability. Most of the humanitarian shipments will be through barges, which make up a significant portion (along with tugs) of the US-flagged cargo fleet.”

Lapan notes that beyond offloading, part of the problem is figuring out how to get goods into the interior of the island where, in many cases, roads are blocked and fuel is scarce. “Restrictions on port operations and slowdowns at the port (e.g., cranes operating on generators are moving at half speed), and the … internal movement of goods, will be the primary limiting factors,” he says.

Critics of the law point out that those who have studied it, including the Government Accountability Office, have found that the Jones Act has had a dramatic negative impact on the island. The law increases the price of shipping, as well as the price of goods in Puerto Rico, and has cost the cash-strapped island tens of billions since it was enacted, contributing to the $73 billion in outstanding debt that the island defaulted on earlier this year.

Lapan, though, makes clear that these specific factors have not been considered: “[DHS] has not done an analysis of the potential cost savings of waiving the Jones Act for Puerto Rico since that is not material to our decision-making.”

Still, a growing number of members of Congress believe temporarily waiving the law—like it was recently for shipping in and out of the Gulf Coast after Hurricane Harvey slammed Texas—will in fact speed the delivery of relief items. A group of House Democrats, led by Rep. Nydia Velázquez (D-N.Y.), wrote a letter to acting DHS secretary Elaine Duke earlier this week asking for a one-year waiver from the Jones Act to aid the island’s recovery.

“The island is now facing an unprecedented uphill battle to rebuild its homes, businesses and communities,” the legislators wrote in the September 25 letter. “Temporarily loosening these requirements — for the express purpose of disaster recovery — will allow Puerto Rico to have more access to the oil needed for its power plants, food, medicines, clothing, and building supplies.”

Sen. John McCain, (R-Ariz.) also wrote to Duke, asking why there had been no waiver and also pushing for a permanent repeal in relation to the island.

“I am very concerned by the Department’s decision not to waive the Jones Act for current relief efforts in Puerto Rico, which is facing a worsening humanitarian crisis following Hurricane Maria,” McCain wrote on Tuesday. “It is unacceptable to force the people of Puerto Rico to pay at least twice as much for food, clean drinking water, supplies and infrastructure due to Jones Act requirements as they work to recover from this disaster. Now, more than ever, it is time to realize the devastating effect of this policy and implement a full repeal of this archaic and burdensome act.”

What the White House will do is really anyone’s guess at this point, but signs are not positive for advocates of repeal. When President Donald Trump was asked about the waiver Wednesday, he explicitly admitted there was resistance to the move because of the shipping industry’s interests.

A White House spokesperson referred questions about the president’s thoughts on the Jones Act to DHS.