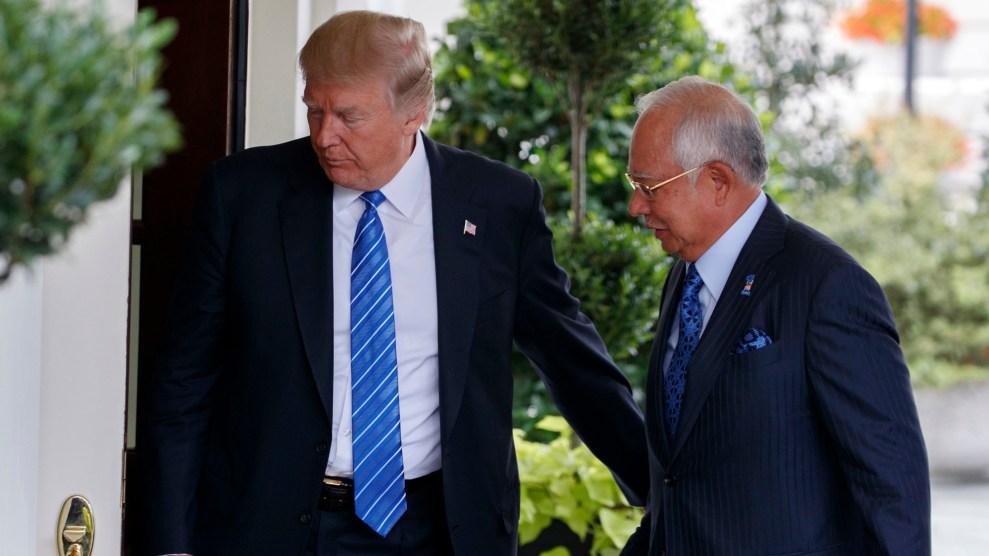 Like Trump, Najib is under investigation by the US Justice Department. DOJ has filed lawsuits that allege the prime minister’s family and associates stole more than $4.5 billion over six years from a Malaysian development fund. The suits say more than $700 million was laundered and siphoned into bank accounts of an unnamed official, who Malaysian and US media reports identify as the prime minister.  The effort to recover the money is the largest case ever brought as part of the DOJ’s Kleptocracy Asset Recovery Initiative.

Tuesday’s meeting with Trump could offer the embattled prime minister a chance to legitimize his continued reign.

The scandal, which first emerged in 2015, derailed Malaysian relations with the United States. Tuesday’s meeting with Trump, along with a separate sit down scheduled for Wednesday between the prime minister and the top Republican and Democrat on the Senate foreign relations committee, could offer the embattled prime minister a PR boost.

“It’s an honor to have you here,” Trump told Najib in remarks Tuesday afternoon after their meeting.

Najib has denied the corruption allegation. Malaysia’s attorney general, who Najib appointed, has claimed the money Najib received was gift from the Saudi Arabian royal family, an assertion the Saudis dispute.

Long before Tuesday’s meeting, Najib established connections in Washington through a lobbyist named Healy Baumgarder-Nardone, who had served as a Trump campaign aide. A former press official in the George W. Bush White House, Baumgarder-Nardone resigned from the Trump campaign in September 2016, saying the campaign was “going in a direction I am no longer comfortable with.”

But she remained a vocal Trump supporter, and in May, she registered to lobby for Malaysia through The 45 Group, a limited liability company she formed in January in an apparent bid to highlight her connection to the 45th president. She has not filed paperwork indicating that she has signed any other clients.

According to The 45 Group’s Foreign Agents Registration Act filing, Baumgardner-Nardone was hired to help Malaysia with “arranging meetings between US government officials and Malaysian officials and advocating on strengthening relations between the US and the Republic of Malaysia.”

Baumgardner-Nardone reported that she was paid $250,000 on May 9 by Godfrey Group Ltd., a firm that is registered in the British Virgin Islands but lists an address in the Malaysian city of Johor Bahru. Despite the payment through the intermediary, the filing said that Nardone would work directly with Prime Minister Najib’s office.

“Neither the Prime Minister’s Office or Government of Malaysia has instructed, appointed or contracted in any form with the Godfrey Group Ltd, the 45 Group or Healy Baumgardner-Nardone,” the statement said. The spokesman did not say if anyone else might have paid $250,000 for lobbying on behalf of the Malaysian prime minister.

Baumgardner-Nardone did not respond to inquiries on Tuesday. But she has not filed a termination notice or update with the Justice Department indicating the terms of her contract changed.

Najib says he has previously golfed with Trump at the president’s club in Bedminster, N.J., and boasts that he displays a picture of the two of them on which Trump wrote, “To my favourite Prime Minister.” The prime minister and his entourage arrived Monday at the Trump International Hotel on Pennsylvania Avenue, the latest in a string of foreign officials who booked accommodations there that financially benefit the president.

In remarks to reporters Tuesday, Trump emphasized US cooperation with Malaysia against North Korea and ISIS. A militant group active in Malaysia, a majority Muslim country, claims ties to ISIS.

In his remarks, Najib said he came “with a strong value proposition to put on the table.” He said that included a probability that Malaysia would double, to 50, the number of the 737 planes it plans to buy from Boeing over five years. Trump, who also touted that potential deal, has previously taken credit for steering business to Boeing, at times claiming credit for agreements that precede his presidency.

Trump said nothing Tuesday about fighting corruption. Neither Trump nor Najib referenced the Justice Department case, which includes an effort to recover stolen funds allegedly laundered in the United States through purchases of diamonds, a Picasso painting given to Leonardo DiCaprio, and even a film company that owns distribution rights of the “Dumb and Dumber” film franchise. (According to the New York Times, “A spokesman for Mr. DiCaprio said in a statement that the actor received the gifts to benefit his environmental foundation and that he had initiated their return before the complaint was filed,” and the film company “has said that it is cooperating with the Justice Department and that it is seeking to resolve the case.”)

Najib bragged in his remarks that a Malaysian pension fund and a sovereign fund—separate from the fund he is accused of looting—are investing billions in the US economy. Trump touted those investments in his remarks. Malaysians “have to be very happy because we’re hitting new highs on almost a weekly basis,” the US president said. “And so we’re very proud of our stock market and what’s happened since I became president.”

“Cardin feels like it’s incumbent on him to raise human rights given the president and the secretary of state’s unwillingness to do so,” Bartlett said.