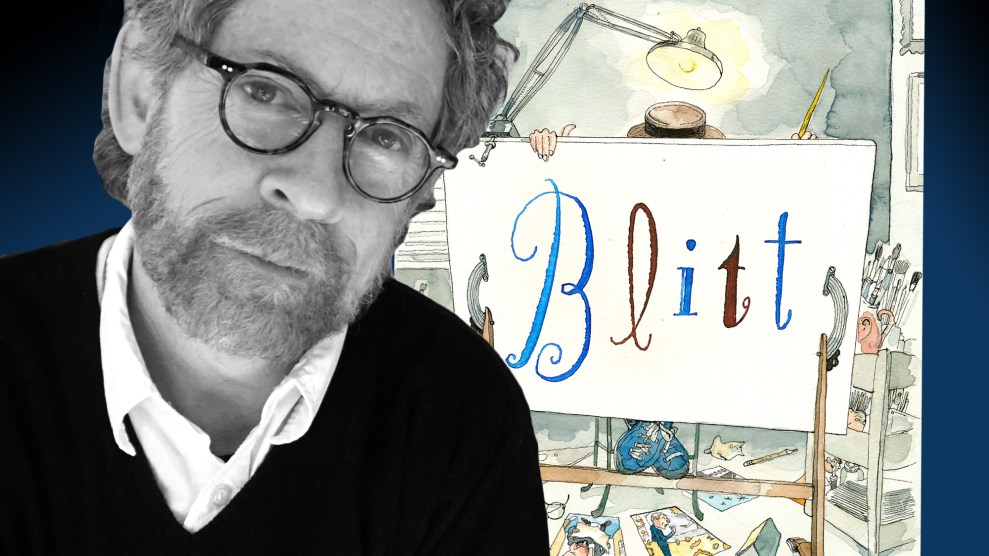 When I interviewed illustrator Barry Blitt back in February, mostly about the joys and tribulations of drawing Donald Trump, we both agreed we were neurotic people—obsessed with fine-tuning our work, afraid to show it to others, and never quite satisfied with the final product. So naturally, when I followed up to ask about his new, self-titled retrospective, he told me that seeing the finished book felt “gratifying and horrifying.”

“Any drawing I do leaves me second-guessing even the most minute decisions—so a book full of stuff really has the internal dialogue going haywire,” he wrote me in an email. “I’m lucky to have had a wonderful designer and editor to help pick stuff. I should also mention a very understanding pharmacist as well.” 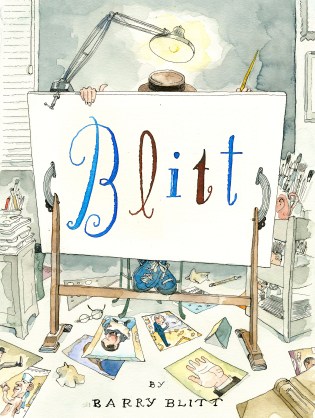 Blitt, out this week, contains highlights from Blitt’s decades of artistic suffering,  including covers and illustrations from magazines such as the New Yorker, Vanity Fair, and others (Mother Jones!), in addition to developmental  sketches and rejected ideas. Blitt’s distinctive handwriting curls throughout, giving us glimpses into his process and wry sense of humor (“My palette—where color goes to die,” one annotation reads). Essays from his editors and colleagues, including the New Yorker‘s David Remnick and Françoise Mouly, offer further perspective on Blitt’s place in the world.

The book is by turns fascinating and entertaining. The New Yorker covers, taken together, are delightful time capsules: one depicts New Jersey Gov. Chris Christie as a street scamp dribbling a ball in front of stopped traffic on the George Washington bridge—a reference to Christie’s 2014 “bridge-gate” scandal. Another one, referencing Hurricane Katrina, puts the Oval Office and President George W. Bush underwater. And who can forget the controversial New Yorker cover with Barack Obama in Muslim garb, fist-bumping Michelle in his office. The response to that one “sort of freaked me out, but not anymore,” Blitt told me.

Seeing how this artist turns his ideas into a finished product is one of the most captivating aspects of the book. One spread portrays his various attempts at drawing Hillary Clinton in the boxing ring for a 2016 New Yorker cover. Blitt recalled how in that case the idea “got away” from him. Clinton went from a battle-hardened warhorse to one who was a little too cute. The final cover landed somewhere in between.

Strangely enough, Blitt says he wasn’t nervous about revealing his process to the world. “There are no trade secrets here, it’s just lather, rinse, repeat,” he told me. “It’s nice to show rough sketches: Ideally I’d like my final art to appear as loose and un-selfconscious as the rough sketches, so I’m happy to see them in print, reproduced nicely.”

The rejected ideas will elicit laughs…and perhaps cringes. Some, including several of the Pope, were probably a bit over the top for most magazines. Three publications rejected this illustration of Tiger Woods, who had been recently outed a serial adulterer. And this comically dark cartoon of Anthony Weiner was killed at the last minute.

Overall, it’s an impressive, humorous collection. Blitt is characteristically self-deprecating in the book’s introduction: “Labeling and captioning all the sketches and finished illustrations in this collection, I am struck by how many of the ideas I myself don’t understand. That I can’t explain at all—with words, to other people.”

But the beauty of his art is that it rarely needs explaining. You just get it. And being invited to laugh about things that are often quite serious—even if only for a second or two—is a relief. As Remnick writes, Blitt is “able to make the most startling connections between and among the most disturbing and comical elements of our political existence. And by making us laugh so deeply, he helps us survive the worst of it.”