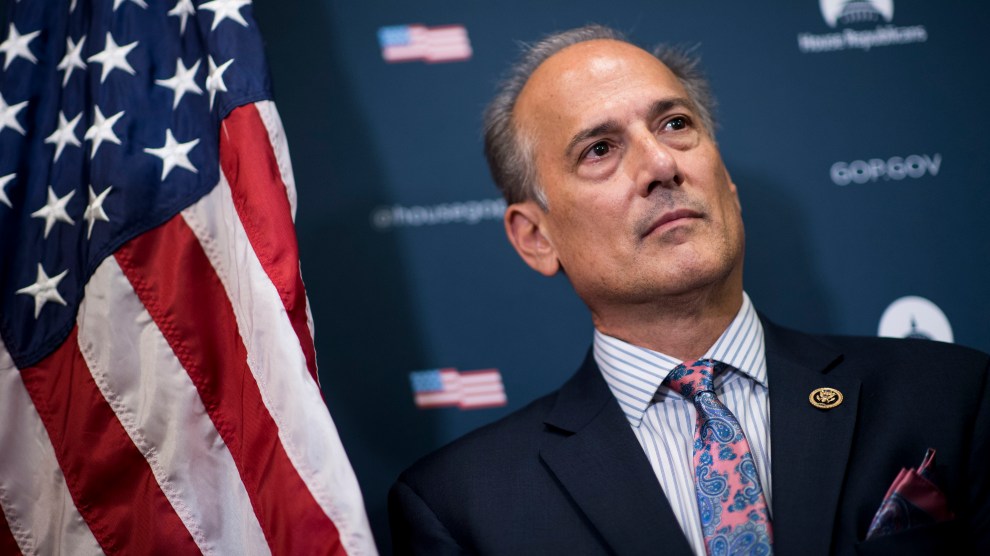 On a Friday afternoon in September, President Donald Trump nominated Rep. Tom Marino, a Republican from Pennsylvania, to spearhead the federal response to the most deadly drug epidemic in the nation’s history. If approved by the senate, Marino would become the country’s so-called “drug czar,” or director of the Office of National Drug Control Policy.

During his time in Congress, Marino has developed a cozy relationship with the drug distributors that his office would help oversee—and which stand to lose from a federal crackdown on painkiller distribution. Pharmaceutical distributors, which disseminate drugs to pharmacies across the country, were among the top contributors to Marino’s House campaigns. They lobbied extensively to support legislation, signed into law last year, that Marino co-sponsored making it more difficult for the Drug Enforcement Agency to shut down pharmacies it suspects are diverting pills. Today, Marino’s former chief of staff is a vice president at the National Association of Chain Drug Stores.

When Marino was nominated, “my jaw dropped,” says Andrew Kolodny, who directs opioid policy research at Brandeis university and leads Physicians for Responsible Opioid Prescribing. “I knew he was the guy who had championed the bill that weakened the DEA at a time when we need them to be able to do their job more effectively. If he was someone who cared about the opioid crisis, he never would have pushed through that bill.”

Marino, an early Trump supporter, has repeatedly voted against drug reform legislation since he assumed office in 2011. Last year, he suggested sending drug users to a “hospital-slash-prison.” His office declined request for comment from Mother Jones.

Campaigning with money from the “big three”

When Marino campaigned in 2014 and 2016, pharmaceutical company PACs contributed more than any other industry, giving $134,000 in the two races combined, according to campaign finance website Open Secrets. Cardinal Health, Amerisource Bergen, and McKesson, the country’s “big three” distributors, gave a combined $51,500. McKesson and Cardinal Health PACs reached the limit that the organizations could give to a candidate’s PAC.

The three distributors, all among the top 15 of the Fortune 500, played an instrumental role in fueling the opioid crisis. According to a Pulitzer-winning Charleston Gazette-Mail investigation, the companies made $17 billion by sending some 423 million opioid painkillers to pharmacies in West Virginia between 2007 and 2012. “The unfettered shipments amount to 433 pain pills for every man, woman and child in West Virginia,” the investigation found.

In January, McKesson agreed to pay a $150 million fine for failing to report suspiciously large or frequent purchases of controlled substances. Cardinal Health agreed to pay $44 million last December to settle similar allegations, on top of a $20 million settlement to the state of West Virginia. Amerisource Bergen will pay another $16 million to the state.

Marino is perhaps best known for co-sponsoring the House version of the Ensuring Patient Access and Effective Drug Enforcement Act, which passed with bipartisan support last year. Before its passage, the DEA had the power to suspend pharmacies or distribution facilities it believed to be diverting drugs for nonprescription use before it proved the diversion in court. In 2012, the DEA used this authority for the first time against a national pharmacy chain, raiding two CVS drugstores near Orlando, Florida. The pharmacies had ordered more than 3 million oxycodone prescriptions from their distributor, Cardinal Health, when the typical pharmacy orders about 69,000 in the same period.

“This bill passes the way it’s written…we won’t be able to stop the hemorrhaging of these drugs out of these bad pharmacies and these bad corporations,” said the former head of the DEA’s diversion program.

Cardinal’s distribution facility in Lakeland, Florida was suspended for two years; the CVS pharmacies regained licensure last year. A CVS spokesman noted that the suspicious orders were reported in 2010 and 2011 adding, “We previously responded to the DEA’s concerns by enhancing our policies and procedures for filling controlled substance prescriptions.”

The Ensuring Patient Access and Effective Drug Enforcement Act makes it more difficult for the DEA to temporarily suspend licenses of companies accused of failing to report suspicious orders of drugs and gives the companies an opportunity to submit a “corrective action plan.”

The drug distributors together with their umbrella group, the Healthcare Distribution Association, ran powerful lobbying operations in Washington, spending $13 million on the legislation and other issues between 2014 and 2016, according to a 2016 investigation by the Washington Post. CVS, Rite Aid, and the National Association of Chain Drug Stores also hired lobbyists to monitor the legislation, according to Open Secrets.

Marino’s office has said the legislation “protects patients’ right to access necessary medication.” But critics say the legislation emboldens distributors and pharmacies to break the rules. “This bill passes the way it’s written, we won’t be able to get immediate suspension orders, we won’t be able to stop the hemorrhaging of these drugs out of these bad pharmacies and these bad corporations,” Joseph Rannazzisi, who led the DEA’s diversion program, reportedly said to congressional staffers when the bill was introduced, according to the Washington Post. “What you’re doing is filing a bill that will protect defendants in our cases.” Rannazzisi stepped down last year, after nearly a decade as DEA deputy assistant administrator, in part because of his disagreement with Congress over the bill.

If Marino is confirmed by the Senate, his power as drug czar will depend on the Trump administration’s willingness to take his advice. Historically, the Office of National Drug Control Policy hasn’t had a lot of enforcement power, but sets the tone that an administration takes towards drug policy. Bush’s drug czar, John Walters, pushed a law enforcement-oriented war on drugs. Michael Botticelli, the drug czar under Obama, who was open about his own history of addiction, encouraged a public health-focused approach, manifested in the administration’s push to fund addiction treatment through the passage of the 20th Century Cures Act.

According to an administration official who spoke to Mother Jones on the condition of anonymity, Marino clearly cares about the issues—and has been advocating for a comprehensive approach to drug control that combines treatment and law enforcement. But, the official adds, “With all his pharma baggage, is he the right guy to lead the fight against this epidemic?”