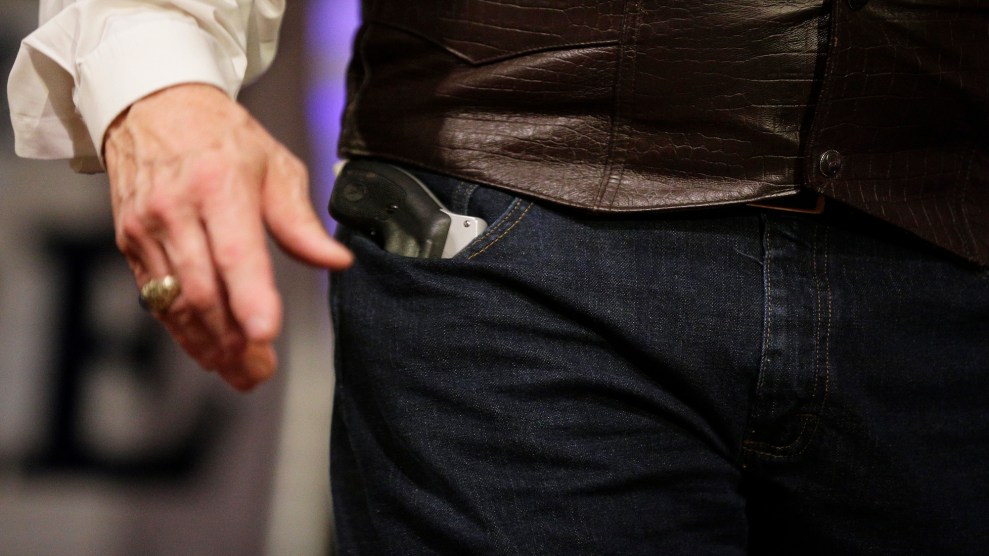 Fifty-two-year-old Gary Carl Buoy was once a law-abiding citizen, a concealed handgun permit holder, living in Oklahoma with his wife Diana Faye Buoy. Then he shot her in the head with a .357 revolver from a few inches away. Kenneth Allen Keith, 48, a gold broker, was also a concealed handgun permit holder when he entered a pawn shop in Danville, Kentucky, and, in the course of a robbery, shot and killed three people in the presence of two children, aged nine and 14 months. The 9-year-old had to call 9-11 to say his parents were dead, lying on the floor. Marvin Arrell Stanton, 49, was at a gas station in Arkansas when he told Jessie James Hamilton to “move his fucking truck” before eventually shooting him from three feet away. Stanton was certified to teach concealed carry classes.

A talking point the National Rifle Association often peddles—and one trumpeted by everyone from Sheriff Joe Arpaio to the Washington Times, especially after massacres like the Las Vegas shooting—is the idea that the best way to stop a bad guy with a gun is to have a good guy with a gun take action. However, there is precious little evidence to support the theory, and significantly more showing that the more commonplace guns are, the more crime takes place.

Now, a new study provides striking data about the number of people who carry loaded handguns in public. In the first investigation of its kind in more than 20 years, researchers from the University of Washington School of Public Health, the University of Colorado, the Harvard School of Public Health, and Northeastern University found that three million Americans carry loaded handguns with them on a daily basis, and 9 million do so on a monthly basis. The overwhelming majority of them (82 percent) report doing so for self-protection.

The number of those who carry handguns has skyrocketed over the past 30 years, in part because state laws regulating handgun carrying have become increasingly relaxed. “Some states give these permits out like candy,” says Lindsay Nichols, the Federal Policy Director at the Giffords Law Center to Prevent Gun Violence. In 1999, there were 2.7 million concealed carry permit holders. By 2014, there were 11 million, and two years later, 14.5 million. Unsurprisingly, those who lived in states with looser laws were more likely to carry concealed than handgun owners in states with more stringent laws. The study describes the average concealed handgun owner as “aged 18 to 29 years, male, self- identified as conservative, [has] lived in Southern regions of the United States, grew up in a firearm-owning household, owned both handguns and long guns, and had been threatened with a firearm in the past 5 years.”

“It’s alarming that so many people are carrying hidden handguns in public across the nation,” says Nichols.

While this study itself does not attempt to discern what, exactly, this means for public safety, other recent studies have shown that states with weak concealed carry laws, or those that have enacted so-called right-to-carry (RTC) concealed handgun laws, experience higher rates of violent crime. “There is not even the slightest hint in the data that RTC laws reduce overall violent crime,” said Stanford Law School Professor John Donhue in a breakthrough study released in June, which found that states that adopted right-to-carry laws experienced a 13 to 15 percent increase in violent crime within 10 years of enacting them.

Meanwhile, the National Rifle Association is backing a “national reciprocity” bill that would allow those who have a concealed carry permit from any state, regardless of the standards, to carry anywhere else in the country. As it stands, state laws on this subject differ dramatically. “People who have various kinds of criminal convictions can get a permit from some states, but are not allowed to carry in other states under current law,” says Nichols.

This bill would change that, and it would do so without creating a consistent national standard. “It would automatically allow thousands of people to carry guns across the country, and it would prevent states from enforcing their own laws…Essentially, it would reduce the public safety to the weakest link in the chain.“