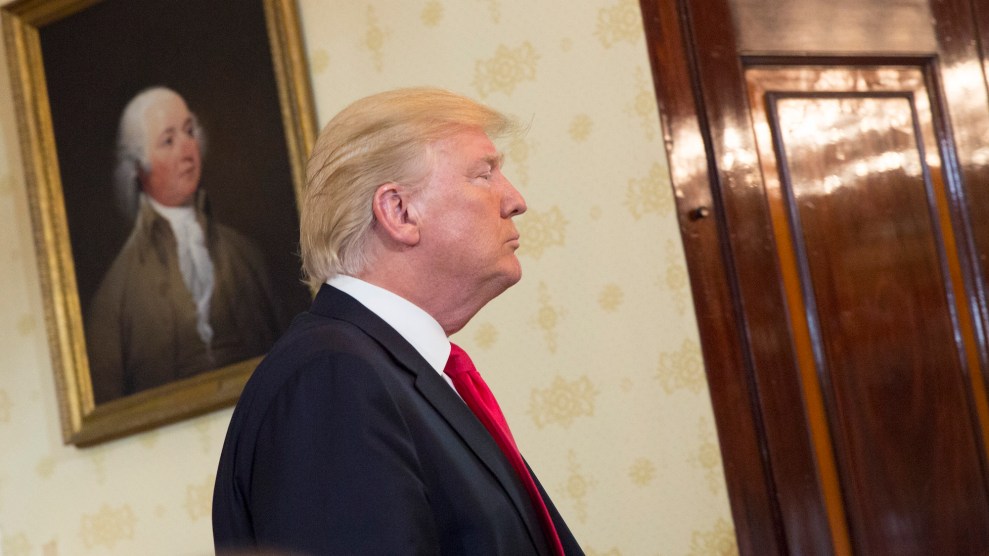 President Donald Trump departs after making a statement at the White House in July. Chris Kleponis/AP

For the third time in eight days, a new study has found that President Donald Trump’s tax plan is a major handout to the richest Americans. On Wednesday, the left-leaning Institute on Taxation and Economic Policy estimated that the top 1 percent of Americans would get 67 percent of the benefits from the Republican tax plan released last week. That comes to $90,000 apiece, compared to an average tax cut of $240 for the bottom 60 percent of Americans.

Last week, the nonpartisan Tax Policy Center (TPC) found that 79 percent of Trump’s tax cuts would go the top 1 percent by 2027, despite Trump’s claims that the wealthy will not benefit. In addition to backing up that report, the ITEP study also provides a first look at how the Republican plan would disproportionately hurt people who live in states with high taxes by eliminating the deduction for state and local taxes, known as SALT.

After the White House and Republican congressional leaders held months of secret meetings, cutting the SALT deduction was one of just two major ways they found to offset a portion of the massive tax cuts. Getting rid of the deduction, which tends to benefit well-off people in coastal states, is a big reason why ITEP found that one in six Americans would see their taxes goes up under the Republican plan. But those numbers aren’t distributed evenly. In Maryland, 30 percent of households—including many middle-class families—would pay higher taxes under Trump’s plan. The state’s top 1 percent, on the other hand, would get a $74,470 annual windfall.

At a panel hosted by TPC on Thursday, Kevin Hassett, the chair of Trump’s Council of Economic Advisers, said the GOP plan eliminates SALT because the federal government shouldn’t subsidize local taxes. But behind the scenes, Republican leaders are already starting to cave. Rep. Chris Collins (R-N.Y.) told the New York Times on Tuesday that he’s been assured that “there’s not going to be full repeal” of the SALT deduction.

“The difference between tax reform and tax cuts is whether you answer these hard questions.”

As alternatives, Republicans are reportedly considering capping the size of the deduction or forcing people to choose between deducting SALT and deducting their mortgage interest. At a Thursday press conference, Senate Minority Leader Chuck Schumer (D-N.Y.) said choosing between the two was like being told to chop off one of your hands. In his view, SALT alone is likely to “kill the Republican plan as it is.”

TPC has found that Republicans’ tax plan would require $2.4 trillion in deficit spending over the next decade. But, as Schumer gleefully pointed out, keeping the SALT deduction would increase that figure by $1.3 trillion. “The only question I have is, how could they have been so dumb to put this in to begin with?” Schumer asked.

Matthew Gardner, a senior fellow at ITEP, says that backpedalling on SALT shows that Republicans are not willing to answer the “thorny questions” of how to fund tax reform. “That’s important because the difference between tax reform and tax cuts is whether you answer these hard questions,” he says.

Republicans had also mulled including a border tax in their framework, but they quickly dropped that idea following opposition from businesses. As a result, the only other major reform Republicans have proposed to pay for their massive slate of tax cuts is the elimination of the personal exemption, a $4,050 deduction per household member. Ending the personal exemption would wipe out almost all the tax benefits that go to many working-class families under Trump’s plan.

Republicans’ say their plan is still just an incomplete framework, and eventually they’ll get rid of most deductions. But it’s not clear what those will be or why they’ll be any more able to overcome opposition. Many of the other big individual deductions, which added up to $1.2 trillion in 2015, would be just as hard to cut as the SALT deduction. On the corporate side of the tax code, there’s roughly $130 billion in deductions to work with.

For Gardner, Republicans’ focus on cutting taxes before identifying loopholes has things “exactly backwards” at a time when the government needs more revenue. “You’re seeing already that the very limited appetite this Congress has for closing loopholes is not that strong,” he says. “The tax reform element of this appears to be collapsing before the process even gets started.”