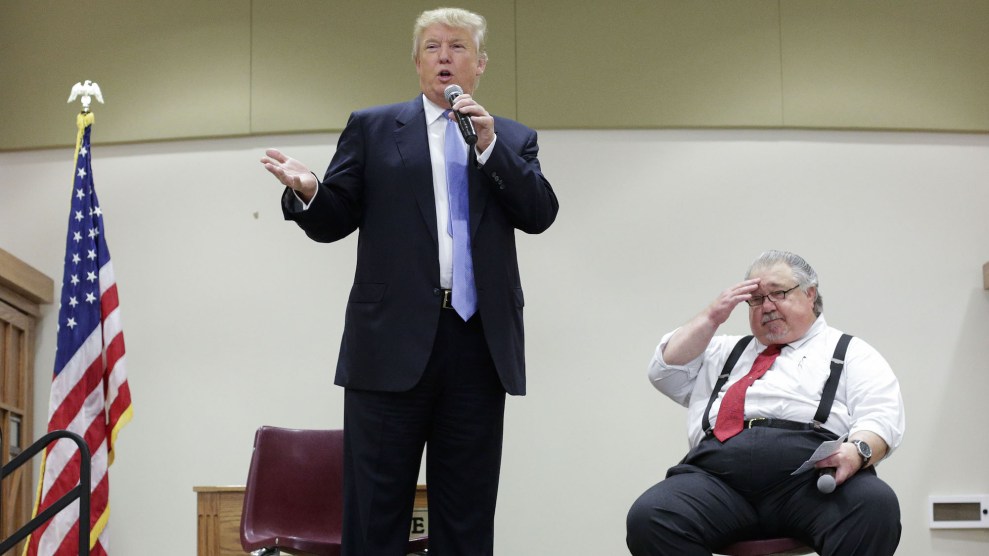 President Donald Trump’s pick for a key Department of Agriculture position appeared to hit a hurdle Tuesday, when the GOP chairman of the Senate Agriculture Committee refused to say whether the nomination would go forward.

Sam Clovis, a former Trump campaign aide who the president tapped to serve as the agriculture department’s top scientist, had already drawn significant criticism—in part because of his lack of scientific credentials. But it was Monday’s revelations about Clovis’ involvement in the Trump campaign’s contacts with Russia that triggered the latest challenge to his nomination. Senate Democrats told Mother Jones Tuesday that they planned to question Clovis about his role in the Russia scandal if Republicans do decide to go forward with his confirmation hearing.

Clovis’ lawyer on Tuesday confirmed reports that Clovis was the Trump campaign supervisor who oversaw George Papadopoulos, a campaign aide who pleaded guilty to lying to the FBI about his contacts with Russians. The FBI in a court filing said it suspects that Papadopoulos’ contacts worked for Russian intelligence agencies. It’s not clear what Clovis knew about Papadopoulos’ activities, but Clovis’ role is potentially significant enough that he was questioned last week by Special Counsel Robert Mueller’s team—and brought before the grand jury Mueller convened. Clovis has also been interviewed by the Senate intelligence committee, according to reports Tuesday.

That’s bad timing for Clovis, who is set to appear next week at a Senate Agriculture Committee hearing on his nomination. Democrats on the panel already strongly opposed Clovis, known for his work for Trump in Iowa, due to his lack of qualifications for the job and statements like his claim that global warming research is “junk science.” But the revelations Monday appeared to cause Republicans to rethink the wisdom of allowing committee Democrats to question him under oath.

Committee chairman Pat Roberts (R-Kansas) on Tuesday would not say if Clovis’ confirmation hearing will go ahead as planned. “To be determined,” Roberts told Mother Jones when asked if the nomination would be withdrawn. Roberts had previously criticized Clovis’ statements about crop insurance but had suggested that the nominee should be given an opportunity to explain his views.

Roberts spoke after White House spokeswoman Sarah Huckabee Sanders appeared to stand by Clovis’ nomination during a press briefing Monday. “I’m not aware that any change would be necessary at this time,” Sanders said.

A “Statement of Offense” unsealed Monday as part of Mueller’s investigation into the Trump campaign’s connections to Russia suggests that Clovis encouraged Papadopoulos’ efforts to use his contacts to try to schedule a meeting for Trump with Russian leadership. “Great work,” Clovis wrote to Papadopoulos in March after the Papadopoulos outlined his efforts.

In late April of 2016, a London-based professor, who prosecutors did not name, but who publications have identified as likely being Joseph Mifsud of the University of Stirling in the United Kingdom, told Papadopoulos he had recently learned from senior Russian officials that they had “dirt” on Hillary Clinton, including “thousands of emails,” according to prosecutors. It’s not clear if Papadopoulos passed that information to Clovis, or if the emails were the same ones that US intelligence agencies believe Russian-backed hackers stole from the Clinton campaign or the Democratic National Committee. But Papadopolous kept up efforts to set up a meeting with the Russians, even offering to go himself if necessary, prosecutors say. “I would encourage you” and another campaign aide “to make the trip[], if it is feasible,” Clovis wrote, according to prosecutors.

Senate Democrats on Tuesday said they expected the White House to withdraw Clovis’ nomination, but they indicated they would welcome the chance to question Clovis under oath about what he knew about the Trump campaign’s contacts with Russia. “Of course he would,” Sen. Patrick Leahy (D-Vt.), a member of the agriculture committee, said when asked if Clovis would be asked about campaign contacts with Russia. “That’s why I think they’ll withdraw it.”

Sen. Sheldon Whitehouse (D-R.I.), who was passing by while Mother Jones spoke with Leahy, interjected to agree that Trump should dump Clovis. “It would seem to be the path of prudence,” Whitehouse said.