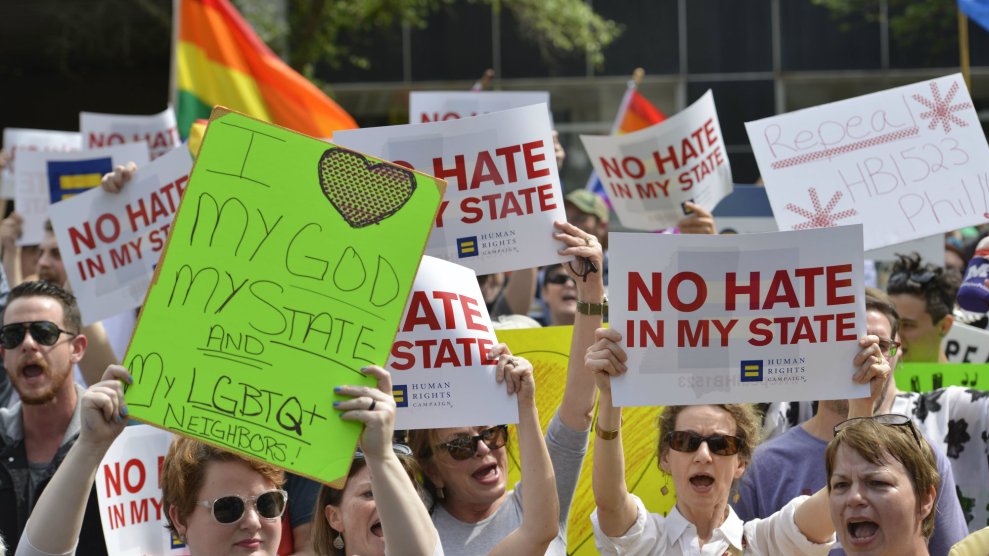 This week, one of the nation’s most sweeping religious exemption laws, which allows for widespread discrimination based on “sincerely held religious beliefs of moral convictions,” went into effect in Mississippi. The law permits religious organizations to discriminate against same-sex couples, transgender people, unmarried couples, and people having sex outside of marriage—including single parents and heterosexual couples—in housing and employment. HB 1523 also authorizes government officials to refuse to issue marriage licenses for same-sex couples.

“It gives government endorsement to the idea that LGBT people are inferior,” Susan Sommer, the director of constitutional litigation at Lambda Legal, a LGBT legal advocacy organization, tells Mother Jones. “It opens the door to harassment and also terribly stigmatizes LGBT people.”

“It gives government endorsement to the idea that LGBT people are inferior.It opens the door to harassment and also terribly stigmatizes LGBT people.”

Mississippi lawmakers passed the “Protecting Freedom of Conscience from Government Discrimination Act” last year, which was authored by House Speaker Philip Gunn in response to Obergefell v. Hodges, the Supreme Court ruling legalizing same-sex marriage. “This decision is in direct conflict with God’s design for marriage as set forth in the Bible,” he said in a statement after the ruling. “The threat of this decision to religious liberty is very clear. I pledge to protect the rights of Christian citizens to teach and operate on the basis of Christian conviction.”

Gunn’s legislation was immediately challenged by LGBT advocates and civil liberties organizations. In June, the 5th Circuit Court of Appeals determined the plaintiffs did not have standing because they had not been specifically harmed, which the stage for the law to take effect this week. Lambda Legal appealed that decision to the Supreme Court today.

“Circuit courts around the country are now split on these important questions of standing,” Sommer says. “This is the kind of case that is likely to come up again and again, particularly given the fleet of anti-LGBT bill proposals pending in state houses.”

Sommer is confident the law will ultimately be found unconstitutional. “I was there in the 5th Circuit when the case was argued, and while the court was focused on this standing issue,” she says. “You could certainly see the judges were expressing great skepticism about the constitutionality of the law itself.” The district court, which heard the case before the court of appeals, found the legislation to be unconstitutional.

At issue is the Establishment Clause, which prohibits the government from endorsing and establishing a preferred religion. The bill states the following beliefs are protected under the legislation: “Marriage is or should be recognized as the union of one man and one woman;” “sexual relations are properly reserved to such a marriage;” and “male (man) or female (woman) refer to an individual’s immutable biological sex as objectively determined by anatomy and genetics at time of birth.”

Opponents point out that this language explicitly allows for discrimination under the pretense of protecting religious beliefs and codifies unconstitutional state-sanctioned favoritism toward some religious beliefs. Sommer says the measure also violates the Equal Protection Clause, which prohibits the government from denying specific individuals or groups protections under the law.

Mississippi Governor Phil Bryant disagrees, insisting it does not “limit any constitutionally protected rights.” After signing the legislation, he issued a statement explaining the move would protect “sincerely held religious beliefs and moral convictions…from discriminatory action by state government.

While the legal battle continues, discrimination against same-sex couples, transgender people, and some unmarried couples, has now become law in Mississippi. “We do fear it will have real consequences, and we also hope Mississippians will find it in their hearts not to discriminate against LGBT people,” Sommer says. “But we certainly expect that harm will flow.”