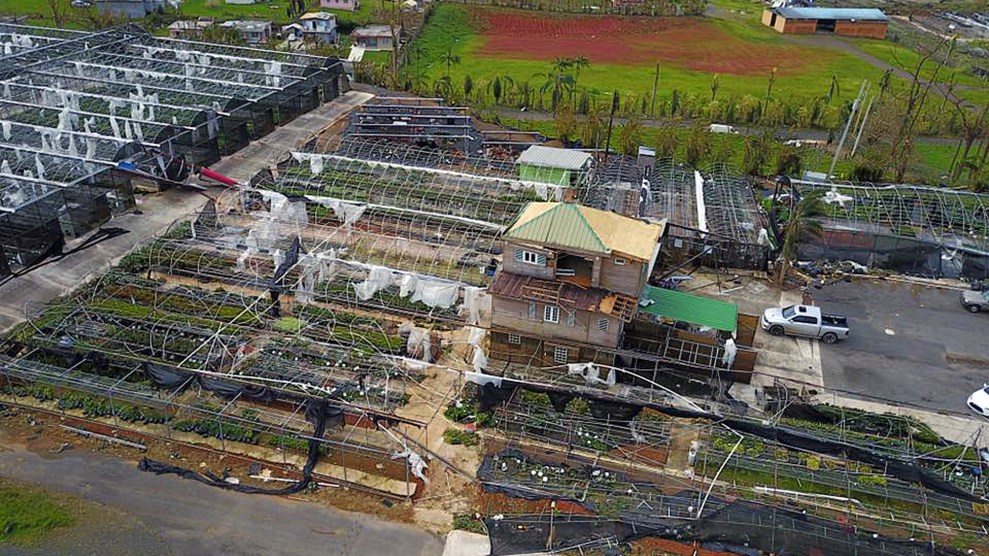 So far, the nation’s largest and most productive agriculture regions—the Midwestern Corn Belt—have largely escaped the most cataclysmic events of what has been a terrible, horrible, no good, very bad year for climate-related mega-disasters.

That means the price and and availability of most foods have been mostly unaffected. But that’s just dumb luck—these regions are by no means immune, as the Central Valley epic, recently-ended drought, and the Midwest’s 2012 drought and 2008 and 2013 floods show.

Meanwhile, several more-minor farming regions have been hit hard this year, racking up billions of dollars in cumulative agriculture losses. Relentless recurrence of such events appears to the shape of things to come. In a 2013 peer-reviewed paper, federal researchers found that the “frequency of billion dollar mega-disasters” like the ones that hit Texas, Florida, Puerto Rico, and California wine country have shown a “statistically significant increasing trend” of about 5 percent annually over the past several decades.

Here is my attempt to put a price tag, in terms of agricultural losses, on the biggest climate-related disasters of 2017. The data remain pretty sketchy at this point, as researchers scramble to assess the damage. I’ll update this post as new information emerges.

Back in March, the Southeast’s most valuable fruit plants bloomed more than three weeks early, “due to unusually warm temperatures during the preceding weeks,” according to the National Centers for Environmental Information. Then came a three-day bout of record-low temperatures. That’s a nightmare scenario for fruit growers because buds are highly vulnerable to freezes. South Carolina lost as much as 90 percent of its peach crop and about 15 percent of strawberries; Georgia surrendered as much as 80 percent of its normal peach haul and up to 80 percent of its blueberries. The NCEI estimates a total hit to the region’s fruit growers of about $1 billion.

Starting in June, fires roared through the rangelands of Oregon, Idaho, and Montana, scorching 8.4 million acres, a combined land mass bigger than Maryland. Montana’s iconic cattle ranches took the brunt, with 1 million acres succumbing to flames. The NCEI estimates total fire-related losses to the region of $2 billion, but that figure includes hundreds of destroyed houses. Local and federal sources I spoke to said no ag-related loss estimates have been made yet. But the damage is extensive. The Billings Gazette reported that Montana ranchers had lost nearly 1,400 miles of fencing to the flames.

California’s massive drought officially ended in 2017—just in time for a new one to start a bit to the north and east. “Extreme drought cause[d] extensive impacts to agriculture in North Dakota, South Dakota, and Montana,” the NCEI reported. “Field crops including wheat were severely damaged and the lack of feed for cattle forced ranchers to sell off livestock.” The drought also “contributed to the increased potential for severe wildfires” (see above.) NCEI reckons total ag-related damages from the drought at $2.5 billion.

Back in August, Hurricane Harvey roared onto the Texas coast and stayed for days. The storm tapped into the “warm Gulf of Mexico for a seemingly endless supply of water, which it turned into torrents of rain from Corpus Christi to Houston to Beaumont,” as NOAA’s climate.gov site put it. While those densely populated areas took the brunt of the damage, the region’s cotton, rice, and cattle farms were also hammered. State and federal agencies have yet to release ag-related damage figures, but they will likely be high. Gene Hall, communications director of the Texas Farm Bureau, estimates losses to cotton farmers alone at $135 million.

Puerto Rico’s secretary of agriculture estimated that the island had lost 80 percent of its crops to Hurricane Maria.

Just days later, Hurricane Irma lashed Florida, striking the heart of the state’s robust agricultural industry. In a preliminary assessment, released in October, the state’s agriculture department estimated total ag damage at a stunning $2.5 billion, including $760.8 million for citrus, $180.2 million for non-citrus fruits and vegetables, and  $624.8 million for greenhouse, nursery, and floriculture crops. Florida Commissioner of Agriculture Adam Putnam added that “We’re likely to see even greater economic losses as we account for loss of future production and the cost to rebuild infrastructure.” Orange juice lovers, take note: The state’s vast orange groves grow mainly for the juice market; and The Washington Post reports that the Irma wiped out up to 70 percent of this year’s harvest, meaning prices will likely rise.

Shortly after Irma subsided, Hurricane Maria slammed into Puerto Rico, a US territory claimed during that colonialist spasm of 1898 known as the Spanish-American War. A former Spanish sugar and coffee colony that has spent more than a century in the shadow of the US ag behemoth, the island never had much of a chance to develop a robust local agriculture economy. Puerto Rico imports more than 80 percent of its food. Back in May, NPR reporter Dan Charles reported on a “new wave of interest in food and farming” there. “People are thronging to new farmers markets,” he added. “Chefs are making a point of finding local sources of food.” Irma obliterated all of that—Puerto Rico residents now struggle to find any food at all. In early October, Puerto Rico’s secretary of agriculture, Carlos Flores Ortega estimated that the island had lost 80 percent of its crops to the storm—an estimated hit of $780 million.

As Napa and Sonoma County residents survey the wreckage after California’s deadliest-ever week of wildfires, it’s way too early to tally the damage to the region’s prestigious wineries, vineyards, and orchards. Again, costs are likely to be high. Mother Jones’ Maddie Oatman reports that “In Sonoma County alone, agriculture and livestock, including 30,000 dairy cows and 35,000 sheep and goats, is worth close to $900 million,” while Napa and Sonoma Counties together “produce the majority of the state’s high-end wine grapes and house more than 1,000 wineries.” Here is Fortune’s list of damaged wineries.

So, I have no hard data on the Montana and the wine country fires, and incomplete and/or preliminary data on all the other events. Tally what I do have up, though, and you get about $7 billion in agricultural losses. To put that number in perspective, consider that the severe drought that parched Midwestern corn and soybean country in 2012 exacted damage of at least $30 billion. In a sense, then, we got lucky this year, when it comes to protecting our plates from climate change. That’s a sobering thought, given the storms and droughts that are on the way.