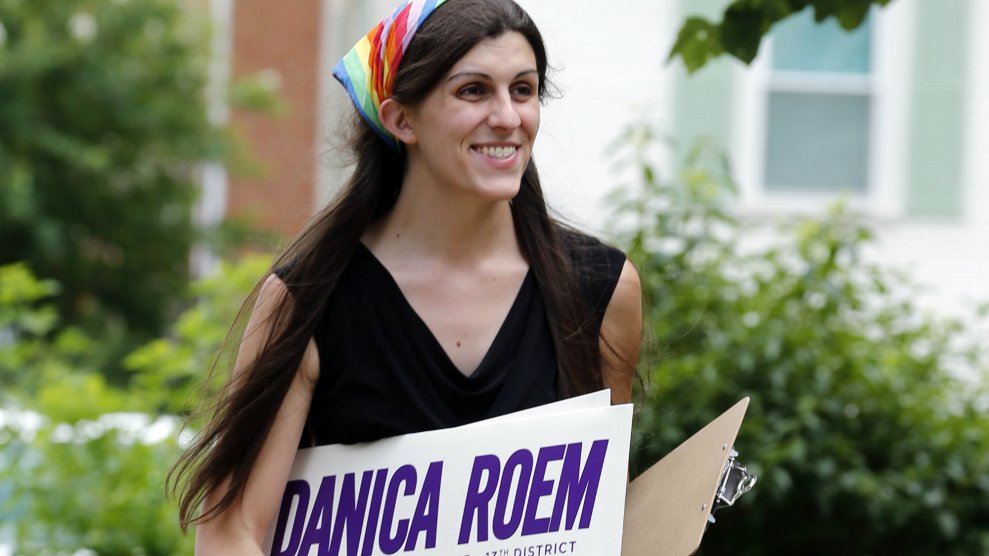 Democrat Danica Roem will become the first openly transgender person to be elected and serve as a state legislator, after ousting one of the country’s most anti-LGBT lawmakers in a closely watched Virginia House of Delegates race Tuesday. Her opponent, GOP Delegate Bob Marshall, has served in the state legislature for 26 years. He’s known for writing Virginia’s constitutional amendment banning gay marriage. This year he introduced a “bathroom bill”—intended to prohibit transgender individuals from using the restroom matching their gender identity; his own party killed that proposal in committee.

Roem isn’t the first transgender candidate to win a legislative race, but she will be the first to actually take office. Her campaign focused on issues like fixing the “miserable” traffic on local highways, increasing teacher pay, and bringing jobs to the region. When I asked her last week about the historic nature of the race, Roem said that the truly historic development was that Route 28 will finally be fixed.

“Tonight voters chose a smart, solutions-oriented trans leader over a divisive anti-LGBTQ demagogue—sending a powerful message to anti-trans legislators all across the nation,” Aisha C. Moodie-Mills, President & CEO of the Victory Fund, an organization dedicated to electing LGBT lawmakers that supported Roem’s campaign, said in a statement. “Danica defeated ‘Bigot Bob’ Marshall not because she is transgender, but because she presented a positive vision for her constituents that will improve their lives.”

Meanwhile, Marshall and his allies campaigned by running attack ads misgendering Roem and accusing her of wanting to teach kindergarteners about gender identity. Marshall, usually an outspoken lawmaker, refused to debate his opponent. Even local reporters had trouble interviewing him about the campaign, which Quentin Kidd, director of the Wason Center for Public Policy at Christopher Newport University, says hurt him. “He’s [was] faced with a situation where he’s got to stand side by side, face to face with someone who represents everything he disagrees with,” Kidd told Mother Jones in a recent interview. “I think he’s demonstrated during the course of the campaign that he doesn’t have the spine to do that.”

While Roem said during the campaign that the race shouldn’t be about her being transgender, the attack ads made that a central theme of the election. “Her campaign was hard-fought—she shared her personal story with her constituents and braved constant, dehumanizing anti-trans attacks from her opponent—but that is the burden trailblazers often face,” said Moodie-Mills. “Danica has inspired trans leaders across the country, and it is inevitable more will follow in her footsteps and become powerful voices for our community.”