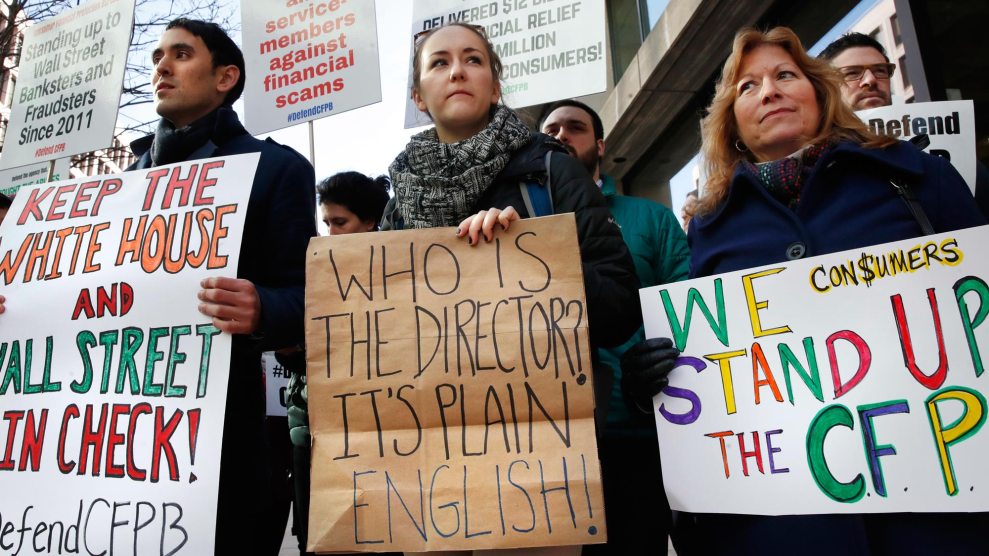 People protest Trump's appointment of Mick Mulvaney as the acting director of the CFPB outside the agency on Monday.Jacquelyn Martin/AP

The first round in the battle of the dueling heads of the Consumer Financial Protection Bureau has been awarded to President Donald Trump and his pick to head the federal watchdog agency.

Federal judge Timothy Kelly, a Trump appointee, ruled in the president’s favor on Tuesday in the ongoing tug-of-war over who is acting director of the CFPB.

Richard Cordray, whom President Barack Obama appointed to lead the bureau, resigned abruptly on Friday. Over the weekend, both CFPB deputy director Leandra English and White House budget director Mick Mulvaney claimed to be the rightful interim head of the agency. English staked her claim on a provision in the 2010 Dodd-Frank financial reform, which created the bureau, stating that the deputy “shall” become the acting director automatically if the director leaves. But the White House announced on Friday that Mulvaney would lead the agency while the administration seeks a permanent replacement.

English filed a lawsuit on Sunday asking for a temporary restraining order against Trump and Mulvaney, arguing that she is the “rightful Acting Director” of the CFPB. Both English and Mulvaney showed up for work at the agency on Monday, issuing dueling memos in which both described themselves as the agency’s interim head. Mulvaney brought donuts, and in his first day at the agency, he issued a temporary freeze on hiring and new regulations.

The case has generated widespread interest because of the CFPB’s critical role as a watchdog of Wall Street and big banks—and because Mulvaney has been a longtime foe of the agency, even co-sponsoring legislation as a congressman aimed at eliminating the agency.

At the center of the case is a debate about which law should govern who serves as acting head of the CFPB. English argues that the chain of succession outlined in the Dodd-Frank law should be the controlling law in this case. The Department of Justice argued on behalf of the Trump administration that the Federal Vacancies Reform Act give the administration the power to appoint an acting head to the CFPB, superseding the rules written in Dodd-Frank.

At Tuesday’s packed hearing at the DC District Court, Kelly issued his ruling on the temporary restraining order from the bench, spending a long time explaining why he believed English’s case is not likely to “succeed on the merits”—a requirement for issuing a restraining order. “The Vacancies Reform Act does appear to apply to this situation,” he said.

English’s attorney, Deepak Gupta, told the court he is concerned that the administration or Mulvaney may take steps to fire English from her job as deputy director, potentially invalidating her lawsuit before it is resolved. Gupta said English had received communications from Mulvaney on Monday “reprimanding her” and that Mulvaney had sent a memo to CFPB staff telling them to report any job-related communications from English to the general counsel’s office. Gupta said he’d asked for assurances from the Justice Department that English would not be fired, but department attorney Brett Shumate offered no such assurances, telling the court that the department’s job is not to guarantee that English is not fired.

Speaking with reporters outside the courtroom after the ruling, Gupta implied that he may soon be filing an appeal to the DC Circuit Court. “This court is not the final stop” in the legal showdown over who is the rightful CFPB acting director, he said.