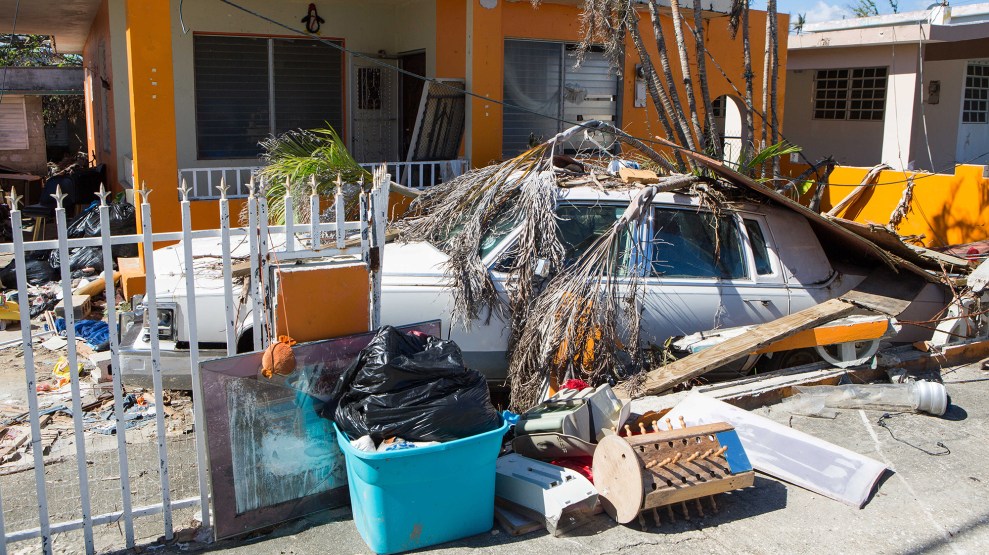 Puerto Rico Gov. Ricardo Rosselló said Monday that the territory will need $94.4 billion to recover from Hurricanes Irma and Maria. That’s a staggering figure for an island already struggling to make payments on its outstanding debt of more than $70 billion and nearly $50 billion in unfunded pension obligations.

“The scale and scope of the catastrophe in Puerto Rico after Hurricane Maria knows no historical precedent.”

“The scale and scope of the catastrophe in Puerto Rico after Hurricane Maria knows no historical precedent,” the governor wrote in a letter to President Donald Trump. “The devastation throughout the Island represents an extraordinary challenge for American citizens residing in Puerto Rico and for the federal government.”

Rosselló appeared at a press conference Washington, DC, on Monday alongside Jennifer González, the island’s non-voting representative to Congress. The governor called on federal lawmakers to cover the nearly $100 billion reconstruction price tag. Doing so, he said, would be “an important step to demonstrate” that the federal government will treat Puerto Ricans like any other American citizens, according to El Nuevo Dia, a Puerto Rican newspaper.

The figure comes in at about half of what Gov. Greg Abbott (R) estimated it would cost the state of Texas to rebuild from Hurricane Harvey ($150 billion to $180 billion)—and about $30 billion higher than an estimate for the total loss in Florida as a result of Hurricane Irma ($65 billion). In comparison, the damage wrought by Hurricane Katrina was estimated at $160 billion, according to the Washington Post.

In Puerto Rico, Rosselló estimates it will cost $46 billion to rebuild damaged and destroyed homes, $30 billion to repair critical infrastructure, and $17.9 billion for long-term recovery.

“The storms caused nearly complete devastation, including the catastrophic failure of the Island’s power grid, water and wastewater infrastructure, and communications networks,” the island’s government wrote in a report submitted to the White House along with the letter to Trump, adding that an estimated 472,000 housing units were destroyed or suffered major damage and that the island’s agricultural sector suffered “near total destruction.” Nearly 80 percent of planted crops were lost.

“Even today, approximately 60% of the island is still without power, and until recently 70% of the potable water is either unavailable or has yet to be certified as safe to drink, hundreds of schools have yet to reopen, and thousands of businesses are closed or have limited operations including the pharma manufacturing industry, which may cause serious shortage of drugs supplies in the US in as much as pharmaceutical products made in Puerto Rico account for nearly 10 percent of all drugs consumed by Americans,” according to the government report.

The Associated Press notes that Congress has already approved $5 billion in aid for Puerto Rico, but, as noted by the Intercept, a large portion of that aid came in the form of a loan the island would need to repay. On November 2, Trump and Rosselló agreed that the federal government, through FEMA, would cover 90 percent of costs to replace public infrastructure, up from the standard 75 percent rate FEMA typically pays. The remaining portion would have to be paid by the local jurisdiction, so Puerto Rico’s government will still be on the hook for 10 percent of the costs.

Read the governor’s full report below: