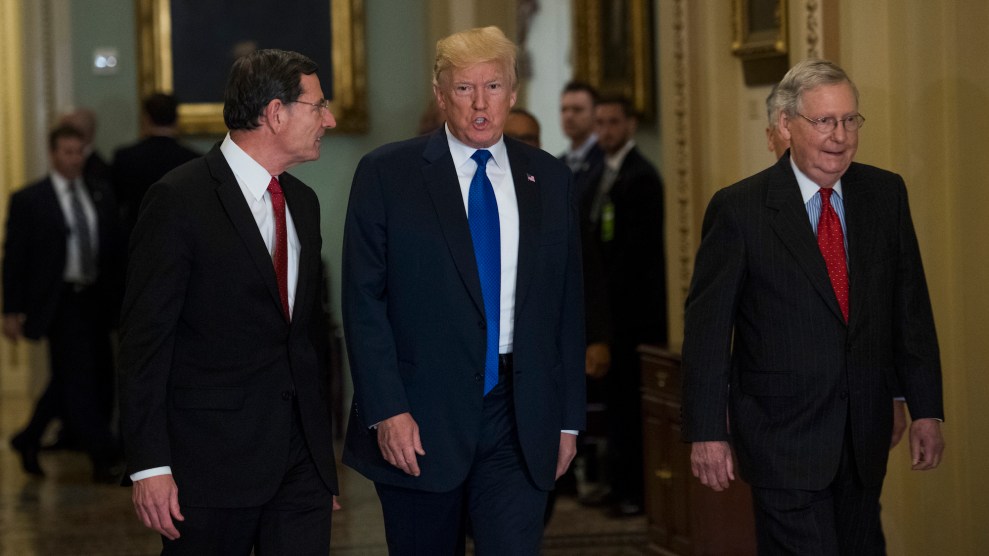 On Tuesday, a Senate committee voted along party lines to send a $1.4 trillion tax cut to the Senate floor. Sens. Bob Corker (R-Tenn.) and Ron Johnson (R-Wis.), two of the tax bill’s top Republican critics, voted in favor of advancing the Tax Cuts and Jobs Act.

Tuesday’s vote by the budget committee clears a procedural hurdle by merging the tax bill with a plan to allow drilling in Alaska’s Arctic National Wildlife Refuge—a concession important to Sen. Lisa Murkowski (R-Alaska). Earlier on Tuesday, it was unclear whether Corker and Johnson would vote for the bill in committee.

The support from both senators suggests that Majority Leader Mitch McConnell (R-Ky.) might be able to win over many skeptical Republicans. The Senate is expected to vote on their tax bill as soon as this week, and McConnell can afford to lose no more than two votes from his caucus.

In his opening remarks, Vermont Sen. Bernie Sanders, the Democrats’ ranking member on the committee, called the Senate tax bill “disastrous and unfair.” Sanders added that he has “not the slightest doubt” that Republicans will quickly use the higher deficits created by the tax cut to slash funding for Social Security, Medicare, and Medicaid.

The hearing was frequently interrupted by activists shouting “Kill the bill. Don’t kill us.” The protesters—including at least one wheelchair user—were quickly removed by Capitol Police.

Protesters, including a wheelchair user with muscular dystrophy, are removed from budget committee hearing pic.twitter.com/SkKZcXm72D

Earlier on Tuesday, Corker touted a proposal to amend the Senate bill so that it raises taxes on individuals and businesses if it does not create as much growth as Republicans’ are promising. Corker says he has secured “an outline of an agreement” to clawback revenue, HuffPost reports. That could lead to additional tax increases for middle-class taxpayers a few years after the tax cuts go into effect, because virtually all economists believe the Republican bill will not pay for itself.

Johnson had previously said he was opposed to the Republican bill because he believes it does not provide a big enough tax cut to businesses, known as “pass throughs,” whose profits are taxed as individual income. Johnson has said President Donald Trump agrees with him, and Johnson is interested in keeping the tax bill moving forward. As Mother Jones has written, almost all of Trump’s roughly 500 businesses are pass-throughs, and Johnson’s brother is the registered agent for the family pass-through business that Johnson used to run.

After voting to send the bill to the floor, every Republican member—aside from Chairman Mike Enzi (R-Wy.)—quickly left the hearing room as Democrats remained to speak out against the bill. Sen. Sheldon Whitehouse (D-R.I.) highlighted their absence. He said they fled as if they were “running away from the scene of a crime.”