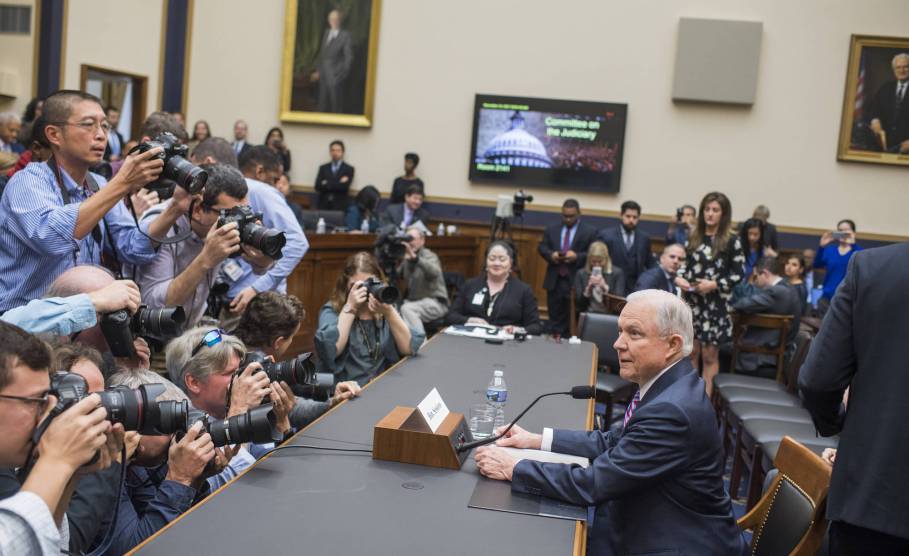 Attorney General Jeff Sessions said Tuesday that he has “not followed through” on a vow to review how the United States can protect its elections from future Russian interference. In a congressional hearing in which he was repeatedly pressed on his claims that he did not recall details of his own contacts with Russian officials and those of other Trump campaign surrogates, Sessions’ most striking lapse may have been his inability to identify any specific actions he and the Justice Department have taken to stop the Russians or other states from meddling in elections next year and beyond.

More than three hours into Sessions’ testimony before the House Judiciary Committee, Rep. Brad Schneider (D-Ill.) pointed out that Sessions had told Sen. Ben Sasse (R-Neb.) at an October 18 Senate hearing that protecting election integrity required “a real review” of how the department can help police election infrastructure. But, Schneider noted, Sessions had said earlier in Tuesday’s hearing that no review is taking place. “Specifically what steps have you taken to protect our elections next year?” Schneider asked.

“You raise a good point,” Sessions said. “I have not followed through to see where we are on that, and I will personally take action to do so.” Sessions said that the department is busy on various agenda items, but he added, “This one is important. And I acknowledge that. But I should be able to give you better information today than I am.”

Sessions’ response will do nothing to alleviate widespread concerns that the Trump administration does not take Russian efforts to interfere in US elections seriously. President Donald Trump has refused to accept to the US intelligence agencies’ consensus view that the Russians interfered in the 2016 election to help him prevail over Hillary Clinton. This weekend, during a trip to Asia, Trump told reporters he believed Russian President Vladimir Putin’s denials that Russia meddled in the election, while disputing the US intelligence findings. (Trump later sought to clarify his remarks, saying on Saturday, “I’m with our agencies, especially as currently constituted with their leadership.”)

But Sessions’ statements on Tuesday highlight the extent to which Trump’s reluctance to accept Russian interference appears to have hampered federal efforts to prevent such interference. Trump has failed to nominate key cybersecurity officials at the Department of Homeland Security. And lawmakers have complained that the Justice Department, in response to requests for guidance about legislation aimed at protecting election integrity, has not even identified the officials they should contact.

“It’s outrageous that Attorney General Sessions couldn’t answer what steps the Justice Department is taking to protect our elections from foreign interference,” Schneider said in a statement to Mother Jones. “There’s nothing more fundamental to our democracy than the integrity of our elections, and I’ll be holding the department accountable to ensure we take action.”
A Justice Department spokesman did not respond to questions.