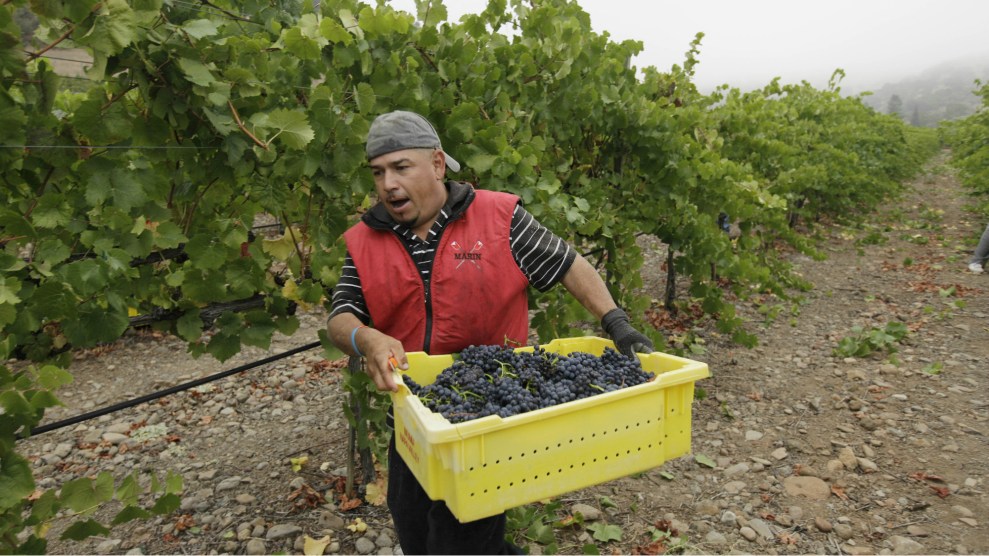 Immigrant workers provide a crucial supply of labor for the American farm industry, making up more than 70 percent of farmworkers—nearly half of whom are undocumented. Though employers have long lobbied for ways to bring in more workers, legislators have disagreed on the best way to reform the current guest worker program for farmworkers, H-2A.

Immigrant advocacy groups say the bill would gut protections for workers, substantially lower wages for migrants, and expose even more workers to exploitation.

The latest attempt is a bill by Virginia Rep. Robert Goodlatte, chairman of the House Judiciary Committee, and one of the biggest proponents of reforming the H-2A.  The bill, which narrowly cleared the committee last Wednesday, would overhaul the current guest worker program and replace it with a new H-2C visa for bringing in foreign agricultural workers to the US. In contrast to the current H2-A visa, the new program, called the Agricultural Guestworker Act, would cap the number of visas at 450,000 a year, and allow workers to be able to stay year-round, while eliminating the requirement that employers provide free housing and transportation.

The bill, though widely supported by industry groups, has been contentious for both Republicans and Democrats. Immigrant advocacy groups say it would gut protections for workers, substantially lower wages for migrants, and expose even more workers to exploitation. The issue has been especially divisive for Republicans, who disagree over whether more immigrants should be brought into the country for jobs. (When Goodlatte introduced a similar version of the bill in the 2013, it never made it out of Congress.)

If passed, the bill could drastically change how migrant farm labor works in the United States. Here’s what you need to know about it:

How is the bill different from the current farm worker program?

Under the current H-2A visa program, workers can only be brought in for seasonal work for up to 10 months, and employers must cover workers’ housing and transportation costs. The program also includes an “adverse effect wage rate,” a slightly higher minimum wage offered to migrant workers meant to prevent wage depression for US workers.  (The AEWR is currently above $10 an hour in most states and can go up to $13.39 in some states.)

With the proposed H-2C program, workers will now be able to stay with employers year-round, with an initial stay of 36 months. H-2C also expands the definition of “agricultural labor,” opening up the visa to workers in industries with year-round employment needs, such as the dairy and meat-processing industries, as well as to the forestry industry. Undocumented farm workers currently in the US would also be to apply for the H-2C visa, which they cannot currently do. The Department of Agriculture, rather than the Department of Labor, would oversee the program.

The H-2C notably cuts back on previous H-2A provisions, no longer requiring employers to provide free transportation and housing for workers. Wages would also be calculated based off a percentage of the federal or state minimum wage, rather than prevailing wages, and would not include an AEWR. The Economic Policy Institute, a nonpartisan research organization, says that this would undoubtedly lower wages for both US and migrant workers, estimating that most workers in the H-2C program would be paid around $8.34 an hour, or $334 a week.

Employers would also withhold 10 percent of a worker’s wages and deposit them into a fund only available in a US embassy or consulate in the worker’s home country, as a way to guarantee workers return home. Workers would be barred from using federal legal aid for filing complaints against employers.

“What you’re doing is asking meat inspectors to enforce our nation’s labor laws and protect migrant workers in what is already a reprehensibly exploitative program,” said one advocate for migrants’ rights. “That’s just not what meat inspectors are expected to do.”

What’s wrong with the current program?

Employers have complained that the H-2A program is cumbersome, expensive, and unreliable. In 2010, 72 percent of farms that applied for H-2A workers received them late, according to New American Economy, a bipartisan think tank, causing an estimated $169.8 million in lost crops. The H-2A also leaves workers open to exploitation by their employers. A BuzzFeed investigation into H-2 visas (which also includes temporary, non-agricultural workers brought in on an H-2B visa) called it the “new American slavery,” documenting reports of workers being deprived of their pay, abused, and even killed on the job.

Which industries would be affected?

The bill would widen the scope of who can participate in the program, meaning dairy, meat-processing and even forestry-related industries could be able to import more workers. It would especially be a boon for farms, which are heavily dependent on migrant workers, but other groups, such as the dairy industry, have long lobbied for access to the guest worker program.

Who’s in support of the bill? Who’s against it?

Predictably, a number of agricultural and industry groups have supported the bill, saying that it will pave the way for them to sustain their industries and legally hire more workers. Some farmers have expressed support for the program as a way to legally bring in workers, especially amid concerns that the Trump administration will increase enforcement.

The bill has drawn mixed reactions elsewhere. The Cato Institute, a libertarian think tank, generally supported the proposal, noting that the bill would benefit the US economy while also curbing illegal immigration. NumbersUSA, a group that advocates for lower immigration levels, criticized the bill and reportedly pressured Republican members of the House Judiciary Committee into postponing the initial markup, according to Bloomberg BNA.

Others have blasted the program, saying it will strip away worker protections and substantially lower wages. Adrienne DerVartanian, director of immigration and labor policy at Farmworker Justice, called the bill “a recipe for worker exploitation.”

“The proposed legislation would slash workers’ wages; eliminate key wage protections; order employers to withhold 10 percent of workers’ wages as a form of bond; and shift the costs of housing and transportation to the workers—all of which would compound the economic coercion workers already face,” said DerVartanian.

Iris Figueroa, a staff attorney at Farmworker Justice, also points out that the bill would do little to help undocumented workers already in the US—especially as it doesn’t allow workers to bring in family or spouses. “As representatives pointed out during the markup, there’s not a realistic expectation that undocumented workers would take that deal,” she said.

The policy would be a “major step back to a shameful era of American history when migrant workers were essentially seen as disposable commodities,” Saket Soni, executive director of the National Guestworkers Alliance, told Mother Jones. Shifting the program’s oversight to the USDA rather than the DOL was “surreal” and “bizarre,” he said. “What you’re doing is asking meat inspectors to enforce our nation’s labor laws and protect migrant workers in what is already a reprehensibly exploitative program… that’s just not what meat inspectors are expected to do.”

The amended bill passed the House Judiciary Committee in a 17-16 vote on Oct. 25, with all Democrats voting against the bill, and two Republicans—Rep. Steve King (R-IA) and Rep. Louie Gohmert (R-TX)—against it. Five Republicans abstained from voting. The bill would need a wider vote from the House before it can advance to the Senate, and Goodlatte has not yet indicated when he will propose it for consideration.

Separately, the H-2A program could also be expanded through an amendment to a Department of Homeland Security Appropriations bill. Introduced by Rep. Dan Newhouse (R-WA), the amendment would allow H-2A visas to apply to all agriculture and allow workers to stay year-round. Farmworker Justice criticized the amendment, saying that it would “further distort the agricultural labor market.”

Update, 1/16/2018: Rep. Goodlatte included a proposal for his agricultural guestworker program in a new immigration bill he introduced along with three Republican co-sponsors in the House on Jan. 10. The bill, called the “Securing America’s Future Act,” proposes stronger border security measures, an end to family-based migration programs, and a fix for Deferred Action for Childhood Arrivals (DACA), the Obama-era program at the center of current immigration negotiations. The bill has received support from House Republicans, but it’s unclear whether House Speaker Paul Ryan, who has stressed for a bipartisan deal on immigration, will commit to a vote on the bill. The proposal comes in the midst of White House deliberations over a spending bill for the year. Democrats have threatened a government shutdown if a DACA deal isn’t reached.