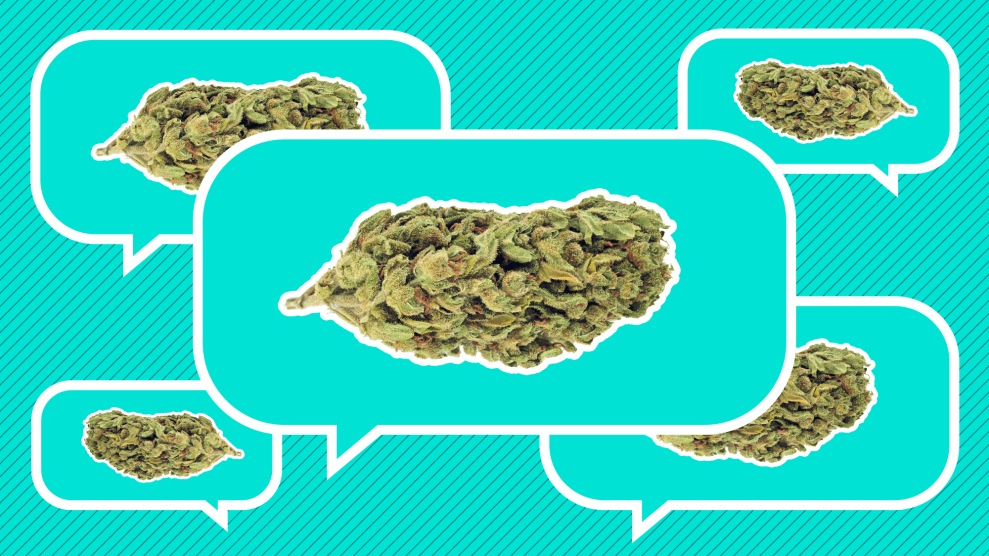 For Californians, legal cannabis is right around the corner. But we have questions. And as it turns out, many of you do, too. A couple weeks ago we wanted to know what questions you had about pot, and the responses were overwhelming. So we went through them and weeded out the most common questions.

First, let’s be clear about what the law says. On November 8th, 2016, Californians passed the Adult Use of Marijuana Act, or Proposition 64. That law went into effect immediately, but licensed cannabis businesses aren’t allowed to start selling recreational weed until January 1. On a basic level, Prop 64:

Still, the law leaves a lot of questions unanswered. Here’s what you, Mother Jones readers, wanted to know:

Where will I be able to buy it?

Just because you’re allowed to possess weed in California doesn’t mean that cities and counties will let businesses sell it. So far, only a few places have passed legislation allowing the sale of cannabis—and even fewer have started handing out licenses to pot shops. That means there will only be a small number of places you’ll be able to buy recreational weed in California on January 1. Some of those places include San Diego, San Jose, and Oakland.

To find out if your city or county does allow recreational sales, you should check your local laws. The San Francisco Chronicle has spent months building a local law lookup tool. You can try it out here. (While the tool is updated regularly, the best way to look up your area’s rules is on your city or county’s website.)

What will happen to people currently locked up in California jails for weed-related infractions?

At a basic level, Prop 64 allows those convicted with cannabis crimes to get out of jail—though not immediately—and have their records cleared in accordance to what the laws read now. It also makes a lot of crimes that were felonies now misdemeanors. For example, under Prop 64, the possession of weed with the intent to sell (previously a felony) is now a misdemeanor. So yes, a lot of those convicted with pot crimes could eventually get out of jail or have their sentences reduced.

Mother Jones’ Brandon E. Patterson wrote a much longer piece about how Prop 64 will affect people with weed charges, and how existing pot laws (e.g. the law prohibiting smoking in public) may still continue to disproportionately affect people of color.

Here’s more information on how to get a weed-related charge removed from your record.

Will legalization bring the cost of cannabis products down, and if so, how long will it take for prices to fall? And by how much?

This is the million-dollar question, and nobody really knows the answer. But other states like Washington and Colorado, which have already legalized recreational pot, may give us a clue about what to expect.

Recreational cannabis sales began January 1, 2014 in Colorado, and between then and July 2017, weed prices dropped from about $1,900 per pound to about $1,300 per pound—a decline of about 30 percent, according to data from the Colorado Department of Revenue and analyzed by research firm Fitch Ratings. Prices are similar in California, where the average wholesale cost of weed was $1,525 per pound for the first half of 2017, while the national average was $1,614 per pound, according to industry data firm Cannabis Benchmarks.

While this price decline may be good for consumers, without an increase in demand for cannabis, states will see a loss of tax revenue as the price of pot drops. “A long-term decline in prices may ultimately be the greatest risk for state cannabis revenues,” according to the Fitch Ratings report.

In states with legal pot, can one’s place of employment continue to prohibit its use by employees?

Yes, under Prop 64, employers still have the right to a drug-free workplace. Even medical cannabis users aren’t exempt from workplace drug tests.

I’ve heard that California produces more cannabis than its population consumes. How will legalization affect California’s legal market and availability throughout the U.S.?

The effect of California’s legalization on the rest of the country’s pot supply is uncertain. If taxes on legal cannabis are too high, researchers predict that growers and buyers may choose to stay in the untaxed black market, which means, in theory, the out-of-state price of cannabis wouldn’t change. But, legalization could also make it a lot harder to grow and sell pot illegally. For example, California’s cannabis cultivation licensing office in the Department of Food and Agriculture is developing a system where anyone can report illegal operations, the San Francisco Chronicle reports. And some local law enforcement agencies plan to use revenue generated from recreational sales to fund illegal pot busts, which would drive black market prices up.

How will taxes affect the medical marijuana market?

While there is no physical difference between recreational and medical pot, California’s recreational cannabis will be taxed in three major ways: (1) a 15 percent excise tax on cannabis retail sales; (2) a cannabis cultivation tax of $9.25 per ounce of flowers and $2.75 per ounce of leaves; (3) local and state taxes ranging from about 7.75 percent to 9.75 percent. All of this adds up to what experts predict will be an effective tax rate of about 45 percent on recreational pot. That’s more than twice as much as Oregon and Alaska tax their non-medical cannabis.

California’s medical marijuana patients will have to pay these new taxes as well, but are exempt from paying any sales tax.

This will make medical cannabis more expensive, but could ultimately be a good thing for the state of California.

If recreational pot is taxed at a significantly higher rate (making it more expensive) than medical pot and it’s easy to obtain a medical cannabis card, many consumers would just choose to buy weed in an untaxed, medical market—and the state would miss out on millions of dollars in tax revenue. That happened in Washington following the beginning of retail sales in 2014 (though, in the first year of legalization, the state still raked in $70 million in tax revenue from legal weed sales).

Other states, like Colorado and Oregon, have chosen to fix this problem by enforcing strict laws on who can obtain a medical cannabis card. Since California laws prevent the state from making it harder for medical patients to access marijuana, lawmakers decided to tax both markets nearly the same.

What is the legal limit for marijuana intoxication while driving? How will it be tested? Do law enforcement officials expect an increase of motor vehicle accidents after the legislation takes effect?

On January 1, it will still be illegal to drive “while impaired by marijuana.” However, law enforcement agencies in California haven’t started using pot breathalyzers to enforce that law—yet. That’s because they don’t have a reliable method of measuring how much weed is in someone’s system. While most breathalyzers work by measuring a person’s blood alcohol content, or BAC, the compounds found in weed take much longer to dissolve in our bodies, so the same kind of blood test won’t work. Oakland’s Hound Labs is finalizing a breathalyzer that can measure (in parts per trillion) the amount of THC, an active ingredient in cannabis, on a person’s breath. Still, it’s unclear what the state will set as a legal limit, if anything all.

In terms of motor vehicle accidents—we don’t really know what the effect of legalization will be on this. Here’s what other states can tell us: In one study conducted by the Insurance Institute for Highway Safety, researchers noticed a three percent increase in the number of insurance claims filled for auto collisions following recreational weed legalization in Washington, Colorado, and Oregon, compared to nearby states that did not legalize cannabis. Another study published in the American Journal of Public Health around the same time found that legalization had no effect on the number of fatal car crashes in Colorado and Washington following legalization. While the two studies may seem to contradict each other, they were actually measuring two different things: the first measured the number of insurance claims filed and the second measured the number of fatal car crashes. This suggests that legalization may lead to an increase in only non-fatal crashes. Both studies concede, however, that future research is warranted.

Now that Big Ag can start growing weed, what implications could this have?

First, here’s some background: Prop 64, as passed by voters in 2016, originally restricted licensed cannabis farms to one acre in size. That measure, set to expire in 2023, was intended to give small-scale farmers a head start in the new recreational market. Last month, however, a set of emergency regulations issued by the state changed that. The new regulations now allow farmers to seek an unlimited number of small-farm licenses, beginning in January 2018—opening the market to Big Ag.

“California only has one chance to get this right, and it is already on the wrong path with this last-minute change that flies in the face of what the backers of Prop. 64 promised,”  Hezekiah Allen, executive director of the California Growers Association, a group that lobbies for cannabis farmers, told the LA Times earlier this month. “This single decision will hand over the California marketplace to multinational corporations and a wealthy few at the expense of thousands of growers who are ready to play by the rules and provide economic opportunity in communities that until recently were criminalized or—at the very least—marginalized.”

Still, all cannabis grown in California will subject to the same quality standards as small-scale growers. If you do wish to support small business, we recommend asking your local budtenders (the folks who work at pot shops) about which farms to support.

Will there be cannabis ice cream? (This was a real question—I swear.)

Yup, but only CBD-infused ice cream (CBD is a non-psychoactive chemical found in hemp). For people with a medical card, THC-infused ice cream has been around for years (Ben & Jerry’s founders even considered making pot ice cream in 2015), but in 2018, that won’t be the case. There are places, however, that sell THC-infused goodies including cookies, brownies, candy, coffee, nuts, teas, granola, potato chips, olive oil, butter, peanut butter, and water.

In states that already have legalized pot, the market for edibles is booming as more non-smokers get into cannabis. Across Washington, Colorado, and Oregon, edibles ranked third in terms of market share (after flowers and concentrated cannabis products), with 12 percent of the $2.33 billion weed market across all three states, according to cannabis market research group BDS Analytics.