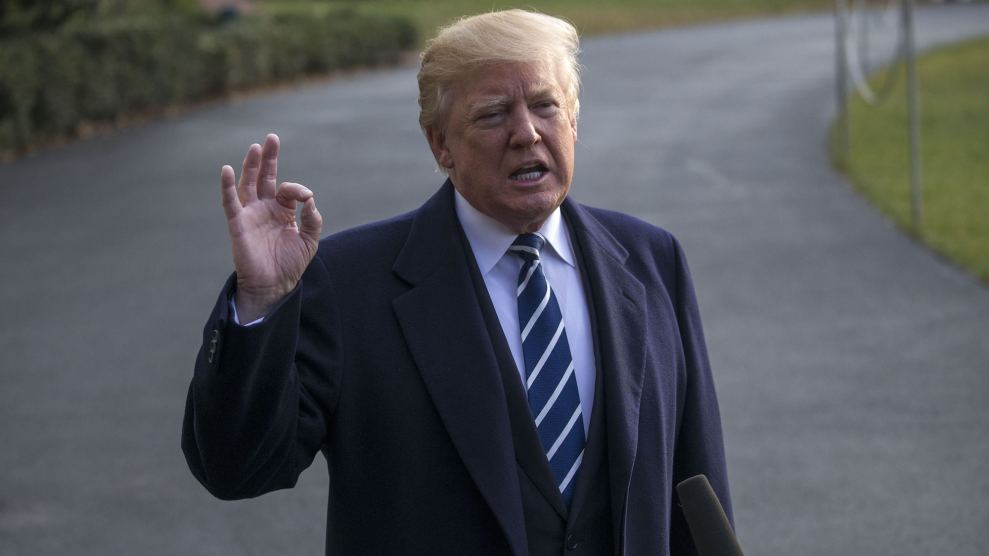 During eight hours of questioning by the House Intelligence Committee on Wednesday, Donald Trump Jr. acknowledged that he and his father had discussed news of his controversial 2016 meeting with a Russian lawyer after the New York Times revealed the secret sit-down this summer. But he refused to disclose the contents of their conversations.

Trump Jr. “acknowledged having discussed the June 9 meeting and the emails that went into establishing that meeting after those emails became public,” Rep. Adam Schiff (D-Calif.), the top Democrat on the Intelligence Committee, told reporters after Trump Jr.’s interview with the panel. “He acknowledged discussing that meeting with his father.”

The admission by Trump’s eldest son raises the question of how closely the Trumps coordinated on their response to the bombshell revelations and could bolster the case that President Trump participated in an effort to craft a false public explanation for the Trump Tower meeting. Trump Jr.’s initial statement about the meeting, reportedly dictated by his father on Air Force One during a July 8 flight from Germany, inaccurately claimed that the discussion focused on adoption.

Trump Jr. was forced to correct his claim when the New York Times reported that he agreed to a meeting, also attended by former Trump campaign chairman Paul Manafort and Jared Kushner, President Trump’s son-in-law, after they were told the Russian lawyer, Natalia Veselnitskaya, could share damaging information on Hillary Clinton provided by the Russian government as part of a Russian effort to help the Trump campaign. Veselnitskaya has said Trump pressed her for written evidence of malfeasance by Clinton during the meeting.

Special counsel Robert Mueller is investigating how Trump Jr.’s initial response was crafted. Legal analysts believe Mueller could cite the president’s actions as evidence supporting an obstruction-of-justice charge. Trump’s alleged role in helping his son lie could show that he wanted to hide the truth from investigators as well as the public. And whatever was said between father and son after emails concerning the meeting became public would certainly be relevant to understanding the role the president might have played in orchestrating the response to the damaging reports about Trump Jr.’s effort to obtain Clinton “dirt.”

Schiff said that while Trump Jr. admitted speaking to his father about his response to reports on the meeting, he “refused to answer questions about that meeting on the basis of a claim of attorney-client privilege.” Trump claimed the conversation was protected because it occurred in the presence of a lawyer, Schiff said. Democrats reject Trump’s privilege claim. “There is no attorney-client privilege that protects discussion between father and son,” Schiff noted.

Trump Jr.’s attorney asked “for more time to deliberate” on whether to share additional information, and Schiff said Democrats will follow up on their request for details about what the Trumps discussed. Trump Jr. met with members of the House Intelligence Committee from 10 a.m. until 5:55 p.m. on Wednesday, though the panel took breaks for votes during the day.

The Trump Tower meeting was one of several contacts with Russians or Russian intermediaries congressional investigators want to ask Trump Jr. about. He will also face questioning later this month by Senate Intelligence Committee staffers.