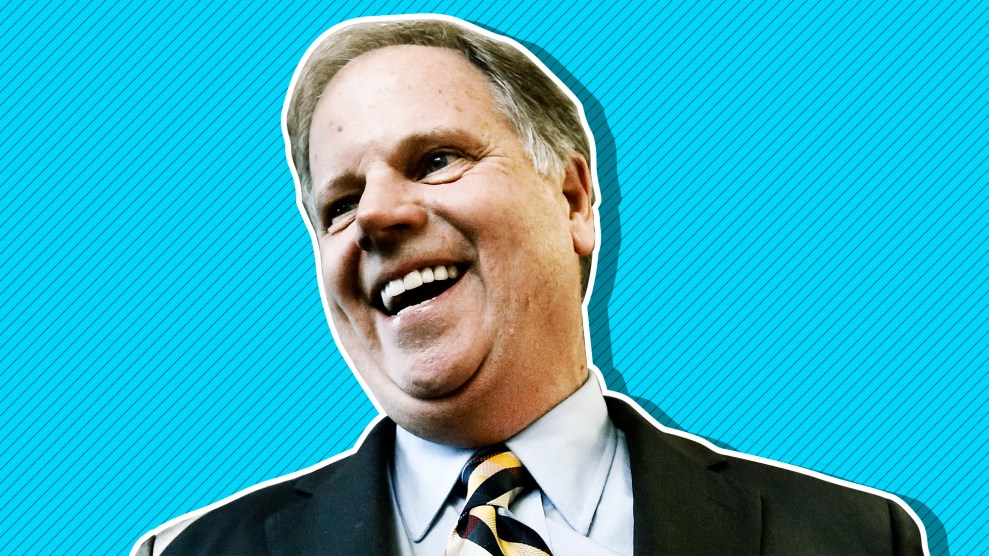 Against all odds, a Democrat will take the seat vacated by Attorney General Jeff Sessions and represent Alabama in the US Senate.

Doug Jones, the underdog in the race, prevailed Tuesday in a close contest against a historically compromised opponent. Roy Moore, a former judge and religious extremist, was dogged by allegations of sexual assault against teenagers, but he still managed to come within a hair of being elected to the Senate by voters willing to overlook his transgressions to keep a Republican in the seat.

Jones’ victory, called by the Associated Press just before 10:30 p.m., with more than 90 percent of precincts reporting, may have been made possible by Moore’s weakness. But his victory suggests that a Democratic wave could be approaching in the 2018 midterm elections, one in which an energized Democratic base may be able to overwhelm less enthusiastic Republicans, even in places like Alabama. Republicans across the country who consider themselves safe may be recalculating their reelection chances.

Moore’s loss is in part a story about his own failings as a candidate. A longtime fringe figure with extreme anti-gay, anti-Muslim views, Moore was twice removed from Alabama’s highest court for failing to follow the law. Last month, multiple women came forward to allege that Moore had assaulted them or tried to date them when they were minors. Despite partisan polarization, enough conservative voters ultimately could not bring themselves to support Moore, costing him the election.

The outcome also raises questions about the power of the nativist, anti-establishment wing of the Republican Party that helped Moore become the party’s nominee. When Moore entered the race, the Republican primary became a contest between the GOP establishment, which supported Republican Luther Strange, the interim senator appointed to replace Sessions, and the Steve Bannon wing of the party, which supported Moore. Though much of the establishment ultimately supported Moore once he became the nominee, Moore himself ran as an anti-establishment Republican. He called on Senate Majority Leader Mitch McConnell to step aside. The night before the election, Moore held a rally attended by a who’s who of disruptive, anti-establishment types: Bannon; Paul Nehlan, House Speaker Paul Ryan’s virulently anti-immigrant 2016 primary challenger; Rep. Louie Gohmert (R-Texas), an arch-conservative who said the allegations against Moore were a political hit job on both Moore and Bannon; and former Milwaukee Sheriff David Clarke, known for making inflammatory statements about Black Lives Matter and for allowing inmates to die in his jails. This movement’s failure Tuesday night could signal an erosion of support, or perhaps tolerance, for this wing of the party among more mainstream Republican voters.

His campaign was not free of mistakes, but Jones successfully walked a tightrope nearly impossible in Southern politics: mobilizing the African American voters who make up the base of the Democratic Party there while peeling off enough conservative white voters to form a winning coalition. Jones was aided by the general energy among Democrats, but he was also a strong candidate. The son of a steel worker who went on to prosecute members of the Ku Klux Klan for murder, Jones had raised more than $10 million by December 1, more than five times Moore’s haul. Over the past two months, the Jones campaign cut ad after ad attempting to win over conservative voters who could not stomach Moore. Then, in the closing weeks of the race, the campaign appeared to rededicate itself to mobilizing the black community among signs that enthusiasm was lacking there. Jones campaigned across the state in the final days of the race with Sen. Cory Booker (D-N.J.), civil rights hero Rep. John Lewis (D-Ga.), and Rep. Terri Sewell (D-Ala.), the state’s only Democratic representative. His campaign aired ads on black radio stations about health care, a major issue in the African American community.

Though a novice as a candidate for political office, Jones has shown impeccable political timing—and not for the first time. The KKK members he prosecuted had bombed a Birmingham church and killed four black girls all the way back in 1963. But in 2001 and 2002, when he argued the cases, he sensed that the state, which had resisted bringing charges in the bombing, was ready to move beyond its past.

Now Alabama has emphasized once again that it’s willing to reject the uglier parts of its history, and again Jones is riding that wave of change. The last time a Democrat won a Senate race in Alabama was 1992, and there was little prospect of it happening in 2016 when Jones entered the race. But Jones picked the right political moment to run, and, as it turned out, the right candidate to run against. Alabama is not getting bluer, but the state showed Tuesday that it was ready to reject a candidate who so thoroughly represented the state’s intolerant past: a man who said homosexuality should be illegal and Muslims shouldn’t be allowed to serve in Congress and who waxed nostalgic for the days of slavery. Jones was able to present himself as a moderate but forward-looking alternative: a man who prosecuted Klansmen and who promised compromise over zealotry. Moore caused Alabamians to worry that businesses would stay away from Alabama; Jones promised to restore respectability to Alabama politics, not only as an antidote to Moore but in response to a number of scandals that have plagued top Republican officials in Alabama. He bet that Alabamians were ready to send a message, and he bet right.

Jones’ election could disrupt Republican priorities in Washington over the next year. He will replace Strange, a dependable vote for GOP priorities, including tax reform. House and Senate leaders are now likely to try to finish tax reform before Jones is seated, which may not happen until January, in order to guarantee passage.