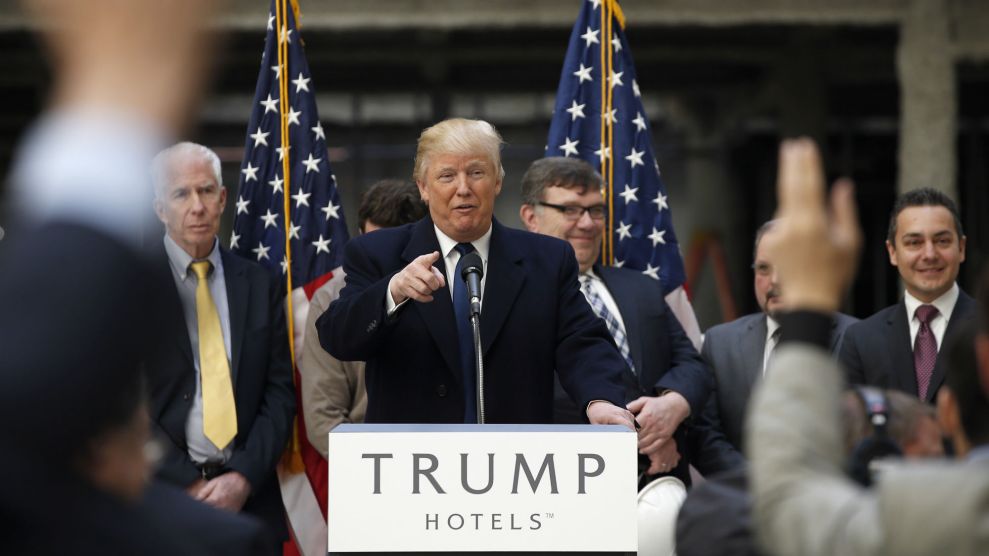 Now it’s getting personal. On Tuesday, a German newspaper reported that Robert Mueller, the special counsel investigating the Trump-Russia scandal, has issued a subpoena to Deutsche Bank, which Donald Trump owes hundreds of millions of dollars, making this financial behemoth Trump’s largest creditor. This summer, Trump said he considered his family’s personal finances a “red line” that Mueller should not cross. But by targeting Deutsche Bank with a subpoena for more information about Trump’s accounts, Mueller may well be crossing that line. More important perhaps, he is digging into a massive Trump conflict of interest and one of the biggest questions regarding Trump’s business empire: Why would this German bank lend him so much money when US banks wouldn’t?

Trump’s history with Deutsche Bank dates back to the 1990s, when his personal finances were at an all-time low. In the 1980s, Trump borrowed money with reckless abandon, with Wall Street firms loaning him billions to pay for the purchase of an airline, new casinos, and other high-priced projects. But after he failed to repay large chunks of his debt, Trump’s reputation with major lenders was in tatters. So when he set out to relaunch his empire, he turned to Deutsche Bank for the financing he couldn’t find elsewhere. Deutsche Bank went on to back several lucrative deals, including the financing of 40 Wall Street and the Trump World Tower near the United Nations. Deutsche Bank helped keep Trump’s business alive.

According to personal financial disclosures made during the campaign, Trump owed at least $713 million on 16 different loans. Of that total, Deutsche Bank accounted for at least $364 million. It’s difficult to pin down the exact amount Trump owes because the loans are reported in ranges and Trump may have paid down his debt since. But Deutsche holds massive loans for two of Trump’s most prized properties: the Miami-based Doral golf course, which Trump purchased with $125 million he borrowed from Deutsche Bank in 2012, and his luxury hotel blocks from the White House, which Trump financed with a $170 million loan from the bank in August 2015, two months into his presidential campaign.

The nature of the Trump’s relationship with the German bank is highly personal. Literally. Trump personally guaranteed several of his Deutsche Bank loans, meaning that if they go bad, the bank doesn’t just have the right to seize the mortgaged property; it also can claim part of the president’s personal fortune. And it’s not only the personal guarantees that make this relationship particularly intimate. None of Trump’s outstanding debt comes from Deutsche’s corporate side—the part of the bank that lends to most corporate customers. Trump did borrow money in the early 2000s from that part of the bank to build a condo and hotel tower in Chicago. But after he failed to make a large interest payment, Trump ended up suing the Deutsche Bank for billions, launching a period of acrimonious litigation. When the lawsuits were settled and Trump was looking for new financing, it was another section of Deutsche Bank—the private bank—that provided him the loans he needed to expand his business.

The private bank is the wing of the bank that deals directly with wealthy individuals who do their personal banking with Deutsche—in other words, the reason the bank lends the money is because the borrower is a good customer. All four of Trump’s current Deutsche Bank loans came through this part of the bank—it was personal relationships, not just business calculations, that cement Trump’s hundreds of millions of dollars of debt.

This relationship with the private bank also led to at least one loan for Donald Trump Jr., who in 2009 attempted to launch a concrete business in South Carolina. After Trump Jr.’s venture initially struggled, Deutsche Bank’s private banking arm refinanced the company’s debt, and eventually Trump purchased the loan from Deutsche personally, getting his son off the hook when Trump Jr.’s company went under.

And Trump and his son are not the only ones in the first family to have a relationship with Deutsche Bank. Jared Kushner’s family has borrowed heavily from the German bank. Deutsche Bank threw the Kushner family a $285 million loan to help with a Times Square property—a loan made one month before the election, while Trump’s son-in-law was a top campaign adviser.

Trump’s supersized Deutsche Bank loans—as well as his debts to other lenders—create massive conflicts of interest. These deals give lenders leverage over the sitting president. Moreover, Deutsche Bank has recently clashed with US regulators over its involvement with the 2008 financial crisis, and, yes, its business dealings with Russia. This means Trump is overseeing a government that has had to make tough decisions over how to handle various matters related to Deutsche Bank—to which he owes a ton of money.

In the summer of 2016, The New Yorker detailed how Deutsche Bank was involved with a complex scheme to move as much as $10 billion out of Russia on behalf of powerful individuals facing sanctions in the West. In fact, according to Deutsche Bank’s own public filings with the Securities and Exchange Commission, the Department of Justice is actively investigating the case. However, last month, CNN reported that since Trump came to office, the Justice Department investigation into the Russian money-laundering scandal had gone dormant. It is not clear why. (The Department of Justice declined to comment on the investigation.) And during the campaign, Deutsche Bank was separately under investigation by the Justice Department for its role in the 2008 financial crisis. The bank settled the case—three days before Trump took office—agreeing to pay $7.2 billion.

Earlier this year, congressional Democrats asked the German bank to turn over information regarding Trump’s loans with the firm, but the bank rebuffed the requests.

There is no public indication of precisely why Mueller subpoenaed the bank. Michael Offit, a former head of Deutsche Bank’s commercial real estate desk who initiated the bank’s relationship with Trump in the 1990s, raises one possibility: Mueller could be interested in who provided the money Deutsche Bank used for the Trump loans. “The source of the money would be invisible to Trump, at least theoretically invisible to Trump. Maybe [Deutsche’s private bank] is making loans using pooled money from all its depositors, or maybe it’s just from one individual or group, i.e. Russians,” Offit says. “That’s probably what Mueller is trying to find out.”

In a statement, the top Democrat on the House Intelligence Committee, Rep. Adam Schiff (D-Calif.), said, “Special Counsel Mueller’s subpoena of Deutsche Bank would be a very significant development. If Russia laundered money through the Trump Organization, it would be far more compromising than any salacious video and could be used as leverage against Donald Trump and his associates and family.”

Update: On Tuesday afternoon, a personal lawyer for Trump insisted that Deutsche Bank had not been subpoenaed by Mueller. “We have confirmed that the news reports that the Special Counsel had subpoenaed financial records relating to the President are false,” Jay Sekulow, the Trump lawyer, said in a statement. “No subpoena has been issued or received. We have confirmed this with the bank and other sources.”