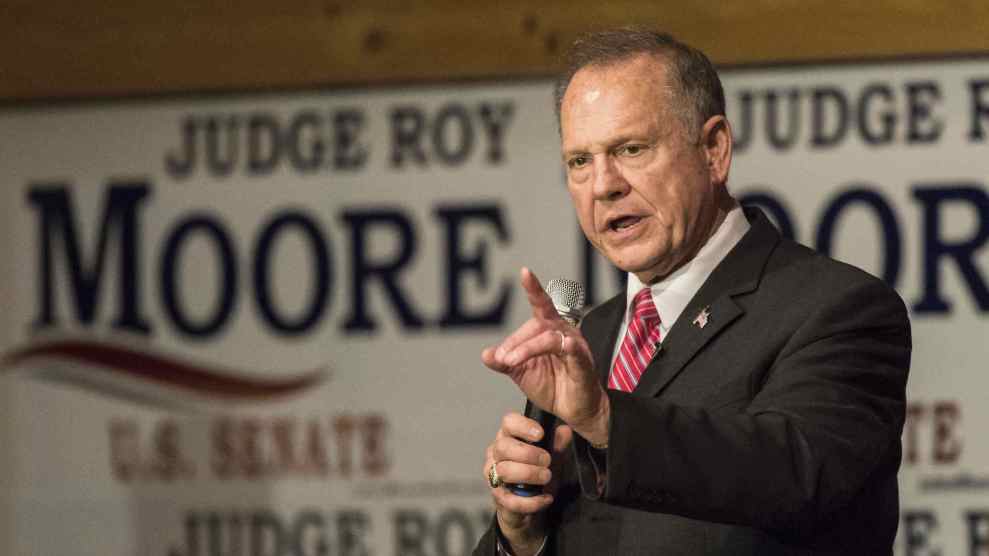 The Alabama Senate race has become a minefield for Republicans, dividing GOP senators who denounced Republican candidate and alleged child molester Roy Moore from the Republican National Committee and President Donald Trump, who are backing Moore. And the NRA, perhaps the biggest outside political player on the right, has quietly entered the race to help Moore.

The NRA’s website does not list the Alabama Senate race as a contest in which it is involved, but two days ago, the Center for Public Integrity reported that the NRA was spending $55,000 to send out postcards to boost Moore in the election this Tuesday. Mother Jones has obtained a photo of the postcard the NRA is mailing to its Alabama members. The mailer slams Doug Jones, the Democratic candidate, and does not make a single reference to Moore.

Jones has called himself “a Second Amendment guy,” but he has called for moderate gun regulation. “We’ve got limitations on all constitutional amendments in one form or another,” he said in an interview this week. “I want to enforce the laws that we have right now. The biggest issue, I think, that’s facing the Second Amendment right now is that we need to make sure we shore up the [National Crime Information Center] system for background checks to both keep guns out of the hands of criminals, but at the same time, cut down on error so that law-abiding citizens can get those.” Jones has pointed out that he is a hunter, owns several guns, and wants to make certain regulations are “smart.” He also mocked Moore for holding up a tiny pistol at a campaign event. “When you see me with a gun,” he said recently. “I’ll be climbing in and out of a duck blind, not prancing around on a stage in a cowboy suit.”

The NRA is depicting Jones as an enemy of gun ownership. The postcard doles out the typical rhetoric. Jones “claims he is ‘a Second Amendment guy,’ but that couldn’t be further from the truth,” it says. “He supports more gun regulation and will be another vote for the Bloomberg-Schumer-Pelosi gun control agenda!” Jones, the mailer says, has received a “?” rating from the NRA “because he failed to answer the most basic questions regarding your Second Amendment rights.” It proclaims, “Democrat Doug Jones can’t be trusted to support your Second Amendment rights” and urges recipients to “oppose Democrat Doug Jones.”

The mailer does not endorse Moore. It does not mention Moore. It is entirely focused on slamming Jones. Perhaps the NRA just couldn’t bring itself to endorse a candidate accused of committing crimes against children. But that has not stopped the gun group from trying to get that man into the United States Senate.