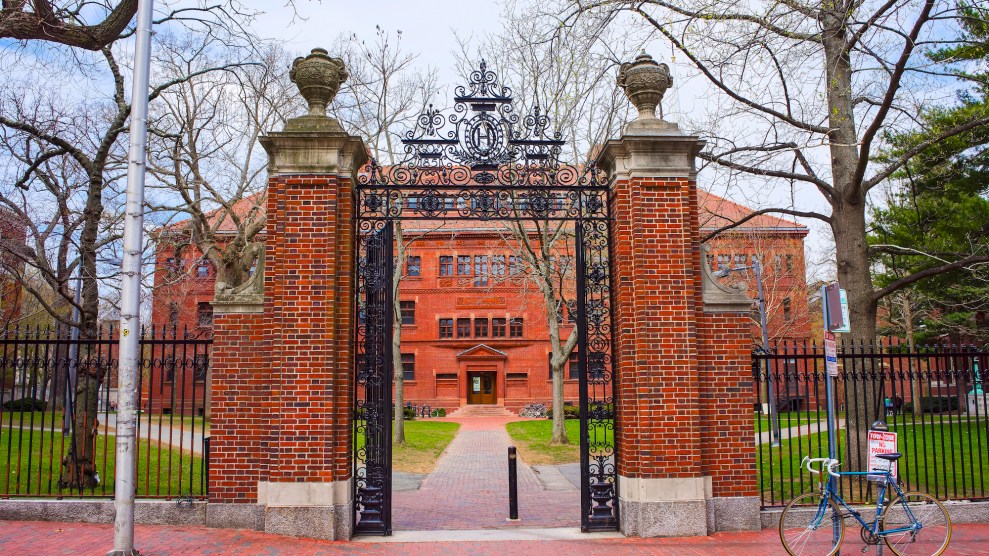 Graduate students at universities like Harvard would pay substantially more in taxes under a Republican plan.Roman Babakin/Getty

It’s not just graduate students who are crying foul over a House Republican plan to impose a massive new tax burden on them—some House Republicans are joining their cause.

In a letter to their party’s leaders in the House and Senate, 31 Republican House members criticized a provision in their chamber’s tax plan that imposes an income tax on graduate students’ tuition waivers, which give free or discounted enrollment to students who teach or perform research as part of their degree programs.

“A tax on graduate tuition waivers would be unfair, would undermine our competitive position, and would inhibit the economic growth that tax reform promises,” the letter states. It further notes that the policy undermines the goals of tax reform—“to fuel economic growth, create jobs, and raise wages”—contending that a well-educated workforce is necessary to do so.

Rep. Pete Sessions (R-Texas) led the effort, following office visits with graduate students and schools in his district who came to Washington to voice their concerns. House Ways and Means Chairman Kevin Brady (R-Texas) said at the American Enterprise Institute last Tuesday that the tax on tuition waivers was part of an attempt to “go down to the bones of the tax code” and simplify it. All of the co-signers on Sessions’ letter voted in favor of the House tax bill last month.

According to the most recent data from the National Center for Education Statistics, 145,000 graduate students received tuition waivers in the 2011-2012 school year. By counting tuition waivers as income, the House plan would hike students’ tax bills by thousands of dollars. According to data provided by the National Association of Graduate-Professional Students, a typical student receiving a waiver for in-state tuition at the University of California, Berkeley, valued at around $24,000 per year as well as a teaching stipend would pay an additional $2,400 in taxes, while a student at Massachusetts Institute of Technology, where annual tuition runs more than $37,000, would owe an additional $10,000. The shift would present a hardship to these students, who, according to the Bureau of Labor Statistics, earn an average annual wage of only about $36,000.

The tuition waiver tax is just one of several proposals across the House and Senate tax plans that raise taxes on universities and their students. Both plans propose a tax on private universities’ investment earnings if they maintain funds above a certain per-student threshold. (The House plan affects schools with funds of more than $250,000 per student, while the Senate plan targets schools above $500,000.) The House bill also scraps a provision that allows individuals to deduct up to $2,500 of interest paid on student loans and eliminates two existing tuition tax credits. The American Council on Education, an advocacy organization that represents more than 1,800 colleges and universities, estimated that House bill would increase students’ total cost by more than $65 billion between 2018 and 2027.

The letter echoes arguments by university students, administrators, and advocates, who say the provision discourages scholarship and innovation that spur economic growth. Almost 50 higher education advocacy organizations joined the American Council of Education in a letter that described the tuition waivers as “critical to the research endeavor at major universities,” especially STEM fields, and called the tax plan “not in America’s national interest.” Graduate students across the country have expressed their outrage at rallies, walk-outs, and “grade-ins”—takeovers of university administrative buildings to grade papers and exams, a chief graduate student responsibility. On Tuesday, eight graduate students were arrested while demonstrating outside of House Speaker Paul Ryan’s office in the Capitol.

Both the House and Senate have passed their versions of tax reform, and as they come together to reconcile their differences in a joint committee, there’s reason to believe the tax on tuition waivers won’t make it into the final bill. In response to a question from a graduate student at last week’s American Enterprise Institute visit, Rep. Brady said he would reexamine the House language in light of colleagues’ concerns, a commitment he echoed during his regular press gaggle on Capitol Hill on Thursday. Senate Finance Committee press secretary Katie Niederee, in a statement to Inside Higher Ed, said that committee chairman Orrin Hatch (R-Utah) remains committed to preserving the Senate’s language, which does not include the provision.