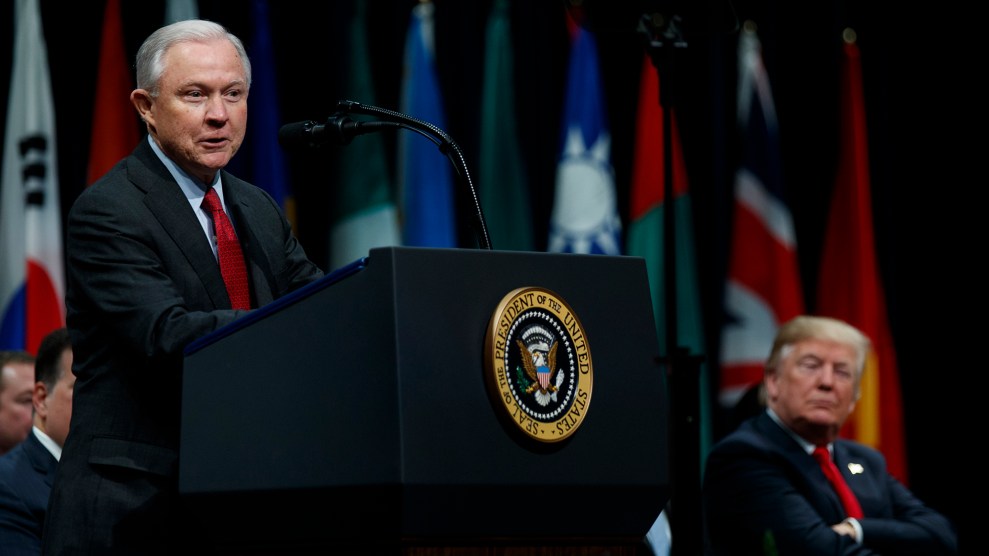 Ten days before Christmas, Attorney General Jeff Sessions held a rare press conference to discuss one of his top priorities in his first year at the Justice Department. “We’ve seen a deadly increase in violent crime,” he said, announcing that the department was dispatching 40 additional federal prosecutors across the country to combat what Sessions believes is a dawning new era of violent crime. “The overall violent crime rate is up by nearly 7 percent, a reversal of a downward trend. Robberies are up. Assaults are up. Rape is up by nearly 11 percent. And murder is up by more than 20 percent.” (It’s true that the violent crime rate has ticked up over the past two years, but it’s still barely more than half of what it was 15 years ago.)

The administration’s focus on crime made it all the more surprising that the FBI’s annual Crime in the United States report, the gold standard of crime statistics, lacked a significant amount of data that experts have relied upon for years to assess crime trends. Until this year, the report contained 81 main tables that allowed researchers to track everything from the rate of violent crime to the racial breakdown of arrests. But when the 2016 report came out in September, there were only 29 tables. The information needed to understand and verify the crime stats cited by the attorney general, as well as the work of local law enforcement around the country, was suddenly harder to obtain.

The decision to remove the data hampers the ability of criminologists and journalists to analyze crime trends at the same time that the administration is transforming the justice system to respond to rising violent crime rates. There’s little clarity on why and when the decision to withhold the data was made, although the FBI has claimed the move was part of a years-long process to revamp how it collects and disseminates crime data to the public. FBI Director Christopher Wray told a congressional panel earlier this month that the missing tables will be added back into the latest report. But beyond 2016, it remains uncertain whether researchers will have access to all these critical crime data.

One of the main areas drastically cut back in the 2016 report was data on homicides. The report no longer contained information on the relationship between the victim and culprit, making it harder to track intimate partner and family violence. Data that would allow researchers to analyze gang- and drug-related homicides was likewise missing. The report did not include information on victim and offender age, sex, race, or ethnicity, nor did it specify which weapons were used in which circumstances. The FBI removed significant information on arrests, reducing the number of arrest tables from 51 to 7, according to FiveThirtyEight. Also gone is a breakdown of drug arrests by type of narcotic, preventing researchers from observing trends in arrests for opioids, a national health crisis that the Trump administration has made a priority.

The information needed to understand and verify the crime stats cited by the attorney general was suddenly harder to obtain.

In response to the missing data, the Crime & Justice Research Alliance, a group that represents the policy interests of thousands of criminologists, sent a letter to Sessions, Wray, and several members of Congress with oversight responsibilities for the Justice Department, asking for the missing data to be added back into the report. “Given this administration’s public statements about addressing violent crime, victims’ rights, the opioid epidemic and terrorism, it is unfortunate that the 2016 report removes key data about these topic areas,” the letter stated. The data deletions, the letter concluded, “mean that progress on critical Administration priorities, such as reducing gang and drug-related homicides, cannot be evaluated with up-to-date evidence.”

A House Judiciary Committee aide says the committee’s staff have helped “facilitate discussions between the Crime & Justice Research Alliance and the FBI” since the letter’s release. The aide did not specify the outcome of those discussions.

Crime researchers have noted an increase in violent crime in the past two years, but the administration’s diagnosis of the problem often doesn’t line up with experts’ conclusions. Sessions’ claim that sanctuary cities have more violent crime, for example, is not supported by evidence. Claims about violence perpetrated by undocumented immigrants likewise have no proof in crime data. Despite frequent references by President Donald Trump and his attorney general to MS-13, a gang with ties to Central America and known for its grisly murders, experts say the group is responsible for a tiny percentage of homicides. “Immigration has had nothing to do with the homicide rise,” says Richard Rosenfeld, an expert in crime statistics at the University of Missouri-St. Louis. “That just happens to be one of the obsessions of our current attorney general. Gangs have been around a long time. It’s not Central American gangs, gangs filled with immigrants—they’re not playing an appreciable role in the rise.”

“This is the first administration, the first Justice Department, in which promulgating errors [about gang violence] is so central to their platform and policy positions,” David Kennedy, a gang policy specialist who has worked with Republicans and Democrats, told the Boston Globe in October.

Rosenfeld, who wrote a report for the National Institute of Justice on rising homicide rates, first noticed the missing data when he attempted to update his latest report for the government office. He could find data on neither drug-related homicides nor drug arrests by drug type. “I was stymied,” he says. This area is of particular interest to Rosenfeld, who believes that the uptick in homicides is linked to the country’s opioid crisis.

In October, FiveThirtyEight reported that the data deletions were not made in consultation with the FBI’s Advisory Policy Board, which would normally have been consulted on changes to the crime report. Instead, the bureau’s public affairs office helped determine which tables to remove based on “web analytics to determine how often tables were viewed online,” according to a press release about the latest report. The FBI attributed the table deletions to a years-long process of revamping the annual crime report in order “to streamline the publications…and to reduce the number of data tables in the reports.” A new online tool, the Crime Data Explorer, would supplement the slimmer annual crime report, the FBI stated.

Despite years of planning to rework the crime report, researchers and state-level program officers were not apprised of the deletions. Criminologists like Rosenfeld only discovered the deletions after the report’s release. Rosenfeld says he would welcome the new tool but doesn’t understand why the FBI would make the data harder to come by in the meantime.

Rep. José Serrano (D-N.Y.), one of the lawmakers who received the letter from the Crime & Justice Research Alliance, told Mother Jones in a statement that the data should be returned to the report and that the Justice Department should “investigate who approved this change and why.”

Wray downplayed the issue at an FBI oversight hearing on December 7. He echoed the bureau’s official position that the data was unnecessary because it was “largely just alternative views of data that was still in the report.” But Wray affirmed that the bureau would add the missing data back into the 2016 report. Mother Jones asked the department whether the data will continue to be included going forward but did not receive a response.

The FBI’s own press release from the fall indicates that the future of this data and whether it will remain easily searchable is uncertain. The FBI will track which of the scrapped tables are individually requested “to determine which, if any, of the deleted tables should be included in future publications or made available through” the data explorer it is building out, the bureau said.