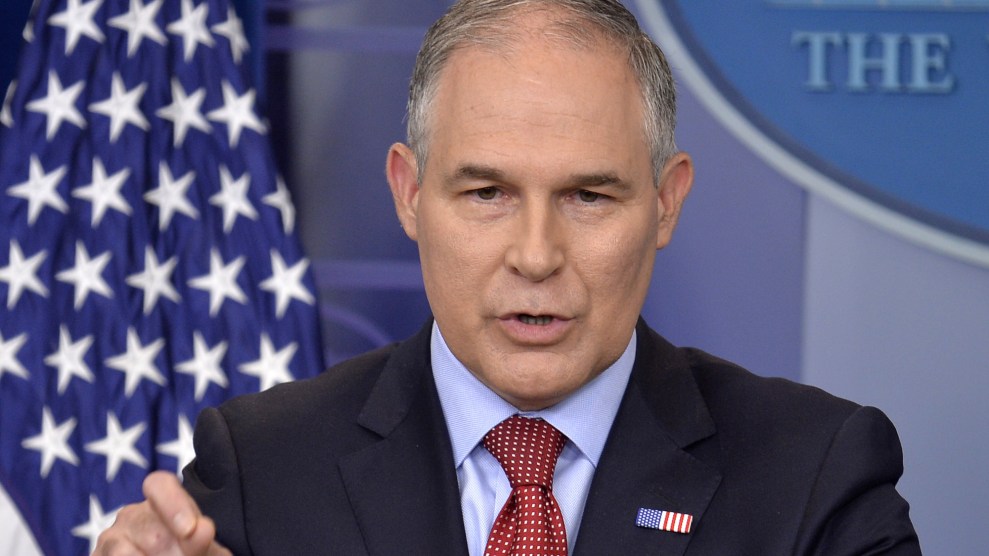 Environmental Protection Agency Administrator Scott Pruitt is connected in more than one way to the Republican consulting firm he approved for a federal contract to track and shape media coverage of the EPA.

Since Friday, when Mother Jones uncovered that the EPA had hired Definers Corp. in a no-bid contract to monitor the media, there have been several new revelations about the firm and its affiliated groups. The New York Times reported that a vice president for Definers, Allan Blutstein, has submitted at least 40 Freedom of Information Requests in the last year. Many of the requests targeted EPA staffers and union representatives who have questioned the way Pruitt has run the agency.

Part of what makes the contract so unusual is the unabashedly partisan work of Definers, which is tied to a network of overtly political groups that share the same staff and office. According to Secretary of State records, Definers is located on the fifth floor of 1500 Wilson Boulevard in Arlington, Va.—the same address listed in Federal Election Commission records for America Rising PAC and the same address listed on incorporation records for America Rising’s anonymously funded non-profit arm, America Rising Squared.

Another affiliate of America Rising is the Need to Know Network, a website that has run unbylined, favorable content on Pruitt’s work at the EPA. The agency in turn has promoted NTK Network’s work on its social media feeds and from Pruitt’s accounts.

A list of Blutstein’s FOIAs, reviewed by Mother Jones, show that he’s interchangeably filed requests on behalf of Definers, America Rising, America Rising Squared, and the Need to Know Network.

As Citizens for Responsibility and Ethics Washington’s Matt Corley points out, Pruitt has directly worked with America Rising in the past, contracting with them when he was chair of the Republican Attorneys General Association:

In addition to targeting agency staff, Blutstein, the Definers employee, has also filed open records requests in various states for climate scientists’ emails at public universities. In October, at least two scientists working on federal climate reports received requests for their emails related to the Climate Science Special Report, a special section of the federal National Climate Assessment that focuses on the role human activity plays in climate change. The requests asked for emails from Katharine Hayhoe of Texas Tech University and Robert Kopp of Rutgers related to the science report, sent between election day 2016 through Trump’s inauguration. Ahead of the report’s publication in 2017, scientists worried that the Trump administration would try to bury the report, and leaked an early final draft (the administration did eventually release the report without tampering, though with none of the same fanfare that accompanied its release under the Obama administration).

It is hardly a new tactic to request emails from climate scientists at public universities. Climate skeptics filed public record requests in the 2000s to obtain emails sent by leading climate scientist Michael Mann at Penn State and scientists at a climate research center at the University of East Anglia. The universities’ lagging reply became the precursor to Climategate, a controversy where a hacker released those scientists’ private emails online in an effort to undermine public confidence in climate science.

The fact that Definers and its affiliates are so closely tied to partisan campaign operations is unusual for a government contractor, experts tell Mother Jones. Charles Tiefer, a law professor at the University of Baltimore who specializes in government contracting, says that the EPA has a normal procurement process run by career civil servants that would normally avoid “reaching out for such an ideological and politically hyperactive contractor.”

“This raises the question of whether EPA political officials interfered in the regular contracting process to get this firm,” Tiefer says. “You don’t see such naked partisan and ideological contracting.”