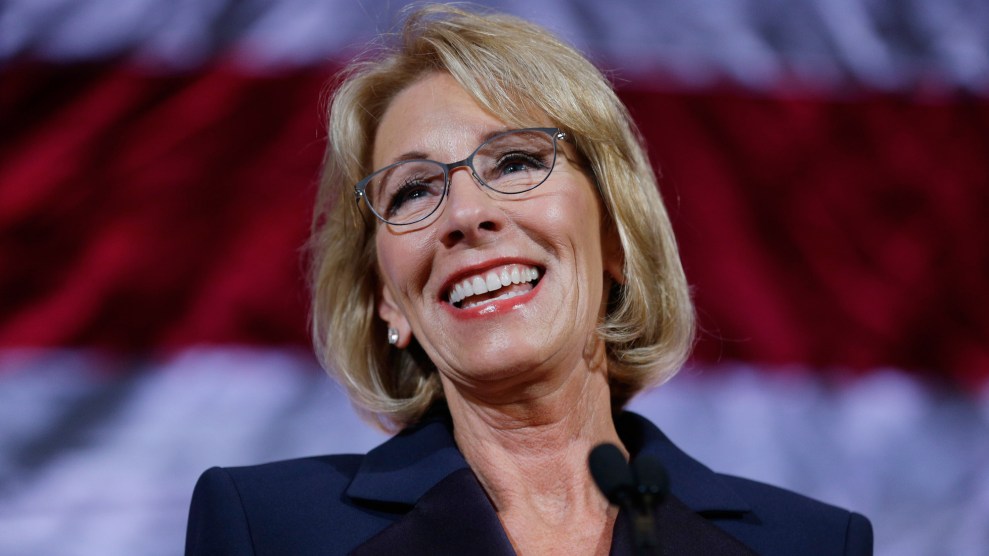 During the heart of the Senate tax bill debate late last week, Pennsylvania Republican Pat Toomey pushed an amendment that would have exempted schools that don’t accept federal funds from being taxed on their endowments. Democrats were quick to point out that the amendment was essentially a gift to Hillsdale College, a tiny, conservative Christian liberal arts college with 1,400 students in southern Michigan—and one with ties to Education Secretary Betsy DeVos.

Turns out that Erik Prince, DeVos’ brother and founder of the notorious private contractor Blackwater, graduated from Hillsdale in 1992. The school is one of several colleges that forego federal funds so they’re not beholden to federal regulations, like complying with Title IX and reporting students’ racial and ethnic information. Its president, Larry Arnn, had at one point been floated as a potential education secretary. “This is a very limited provision,” Sen. Clare McCaskill (D-Mo.) said of Toomey’s proposed amendment, “written for a very special person.”

The Senate eventually passed its sweeping $1.4 trillion overhaul of the tax code without Toomey’s amendment. But the bill does include a number of provisions that could usher along a new era of school choice and privatization—giving DeVos’ education agenda an unexpected shot in the arm.

For starters, the Senate plan includes a provision that will help the private and religious schools DeVos has long championed: an expansion of a tax-free college savings program to include families who put their kids in private K-12 schools or even those who homeschool. At the same time, changes to state and local tax deductions could put a strain on how districts fund the very public schools DeVos is tasked with overseeing. And that doesn’t include several attempts Republican senators made to put provisions in the bill that favored religious schools and incentivized school choice, including a tax credit for corporations and individuals to nonprofits that provide scholarships.

“This bill is designed to prioritize the privatization of education.”

“This bill,” says Noelle Ellerson Ng, associate executive director of policy at AASA, the association of the country’s public school superintendents, “is designed to prioritize the privatization of education.” Specifically, she argues, the Republican tax plans could both undermine public school financing and encourage private school attendance.

First, thanks to Vice President Mike Pence’s tie-breaking vote, Sen. Ted Cruz (R-Texas) added an amendment expanding 529 college savings accounts to allow parents to withdraw up to $10,000 each year for private and secondary K-12 schools. Cruz’s amendment also incentivizes families to use account funds for educational expenses and therapies for students with disabilities “in connection with a homeschool.” (At one point, the measure expanded college savings account eligibility to include unborn children, but the provision was removed because it failed to comply with the “Byrd Rule,” which blocks changes in the measure that don’t directly relate to taxes.)

“Expanding 529s to include any educational option,” DeVos told the Associated Press, “is a common-sense reform that reflects the reality that we must begin to view education as an investment in individual students, not systems.”

Expanding college savings accounts to cover K-12 private schools and homeschooling would “make it easier for people to choose out of public education.”

While some school choice advocates welcome the expansion of these savings accounts, others, like Michael Petrilli of the conservative think tank Thomas Fordham Institute, point out that the 529 savings program mostly benefits wealthy families and wouldn’t likely help low- and middle-class families. Mathew Chingos, a senior fellow and director of the education policy program at the Urban Institute, told Mother Jones in November that the expansion represents “a decent-sized government handout to people who would send their kid to private school anyway.” Ellerson Ng agreed, noting that the expansion of college savings accounts to cover K-12 private schools and homeschooling would “make it easier for people to choose out of public education.”

The Senate tax plan would also scale back state and local tax deductions (SALT), a move that Ellerson Ng warns could put pressure on already-squeezed state and local budgets. Originally, the Senate plan proposed eliminating all deductions for income, property, and other taxes, a move that could have resulted in a loss of $370 billion in state and local revenue over 10 years and put 370,000 education jobs at risk, according to an analysis by the National Education Association. But senators changed course and added a provision put forward by Sen. Susan Collins (R-Maine) that would allow people to deduct up to $10,000 in state and local property taxes.

Nora Gordon, an associate professor at Georgetown University’s McCourt School of Public Policy, wrote that changes to state and local tax deductions could make it harder for districts to raise revenue to fund public schools. Ending deductions on federal income, Gordon wrote, would make taxpayers who use them “less likely to vote for policies that could raise their state and local tax bills in the future.”

There is a bright spot in the Senate tax plan: Educators can deduct up to $500 for educational expenses, up from $250. But the deduction is eliminated altogether in the House plan, so teachers will have to wait until reconciliation is over to see if they can still get some extra help paying for school supplies.