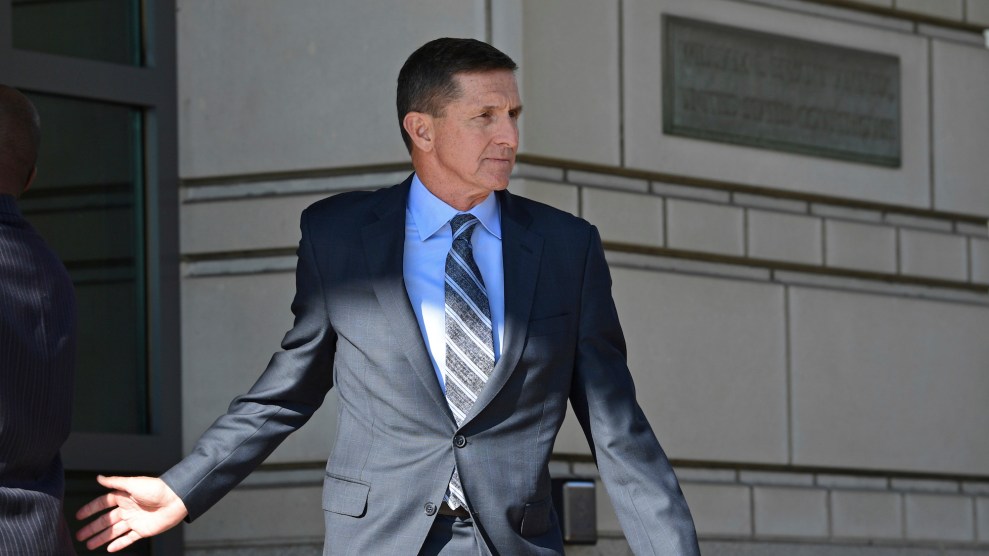 President Donald Trump was informed in late January that Michael Flynn had probably lied to the FBI about his contacts with Russian officials during the presidential transition period, according to multiple reports. The timing is significant: If these reports are correct, it would mean Trump was aware that Flynn, who at the time was serving as White House national security adviser, had likely committed a federal crime when the president allegedly pressed then-FBI director James Comey to drop the bureau’s investigation into Flynn. The news, if accurate, bolsters the case that Trump obstructed justice by pressuring Comey, according to legal analysts.

Lying to the FBI is a felony. Flynn pleaded guilty Friday to making false statements to the bureau, and he agreed to cooperate with Special Counsel Robert Mueller’s ongoing investigation into the Trump campaign’s ties to Russia. Trump denies urging Comey to lay off the investigation, but Comey testified in June that he understood Trump to be asking him to drop the probe. “It was very concerning, given the FBI’s role as an independent investigative agency,” Comey told a Senate panel.

“What we’re beginning to see is the putting together of a case of obstruction of justice.”

CNN on Monday reported that a source said White House Counsel Donald McGahn told Trump in late January that he believed that Flynn had misled the FBI when he told agents he had not discussed US sanctions on Russia with then-Russian Ambassador Sergey Kislyak. The Washington Post reported Sunday that Trump’s personal lawyer John Dowd had also said McGahn told Trump that Flynn had likely provided inaccurate information to the FBI. McGahn was reportedly interviewed by Special Counsel Robert Mueller’s team late last week.

McGahn also told Trump that Flynn had lied to Vice President Mike Pence and recommended that Trump fire Flynn, CNN reported. McGahn spoke to Trump shortly after meeting with then-acting Attorney General Sally Yates. Yates told a Senate committee in May that she had spoken to McGahn about the case because she feared Flynn’s false statements about his Russian contacts could leave him vulnerable to blackmail by the Russians. McGahn did not explicitly tell Trump that Flynn had violated the law, according to CNN.

But the reports suggest that Trump knew Flynn faced serious legal jeopardy well before Trump’s February 14 private conversation with Comey. At that meeting, Comey says, Trump pressed him to drop a probe into Flynn. “I hope you can see your way clear to letting this go, to letting Flynn go,” Trump said, according to a contemporaneous memo Comey wrote recounting the conversation. Comey described the exchange in sworn testimony before the Senate intelligence committee. Trump claims Comey is lying, but he has not made the claim under oath. Multiple congressional committees and Mueller’s office are investigating whether Trump’s statement to Comey and his eventual firing of Comey—a decision Trump later said was related to the FBI’s Russia probe—amounted to an illegal effort to thwart the investigation into his campaign’s contacts with Russia.

“What we’re beginning to see is the putting together of a case of obstruction of justice,” Senator Dianne Feinstein (Calif.), the top Democrat on the Senate Judiciary Committee, said Sunday on NBC’s Meet the Press.

News that McGahn told Trump that Flynn had misled the FBI could diminish the significance of an odd controversy that emerged over the weekend. Trump appeared to tweet Saturday that “I had to fire General Flynn because he lied to the Vice President and the FBI.” The claim led observers to suggest that Trump may have further implicated himself in obstruction of justice. Dowd responded by claiming that he, rather than Trump, had authored the apparently incriminating tweet and had erred by mentioning the FBI. But regardless of who wrote the tweet, McGahn’s reported conversation with Trump supports the conclusion that Trump knew Flynn had likely lied to FBI agents.

I had to fire General Flynn because he lied to the Vice President and the FBI. He has pled guilty to those lies. It is a shame because his actions during the transition were lawful. There was nothing to hide!

Dowd also argued that Trump cannot possibly commit obstruction of justice, according to a Monday report in Axios. “(The) President cannot obstruct justice because he is the chief law enforcement officer under (the Constitution’s Article II) and has every right to express his view of any case,” Dowd said.

“I believe the facts exonerate the president and I’m not going to debate these important issues between the White House and the special counsel in the press,” White House attorney Ty Cobb told CNN Monday.