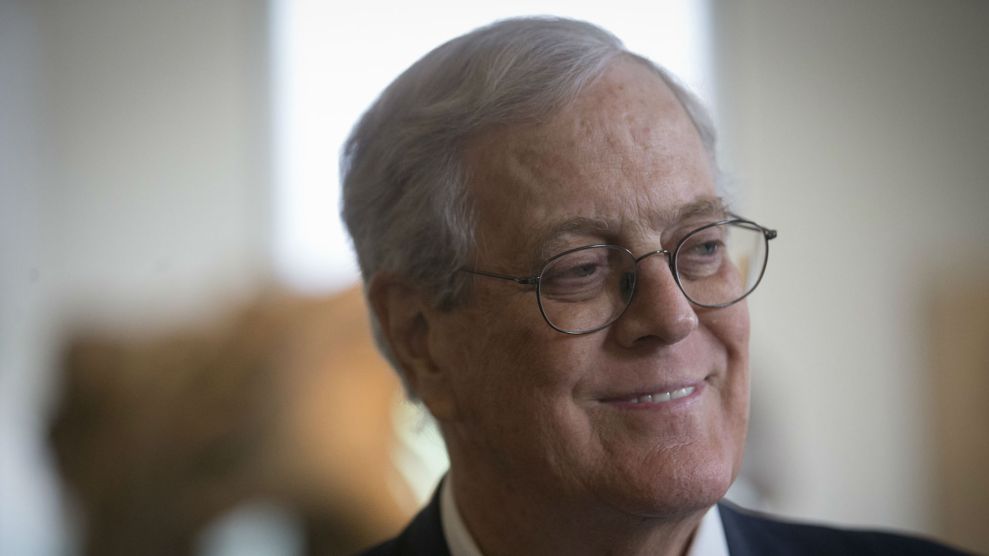 For decades, the billionaire industrialists Charles and David Koch have poured hundreds of millions of dollars into building a network of political groups, think tanks, academic institutions, and grassroots outfits, all with the aim of realizing the brothers’ libertarian, small-government worldview. During Barack Obama’s presidency, the Koch network acted as the unyielding opposition, funding Republican candidates for office and seeking to block Obama’s agenda from practically day one. With their wealth and influence, the Kochs built their own rival party to the GOP itself.

But with the election of Donald Trump, a candidate who had little in the way of a policy agenda or a cadre of loyalists to run his government, the role of the Kochs and their network flipped: Now, they were in a prime position to stock the new administration with their own people and set the agenda. As one Koch network donor told Politico late last year, “In creating the Koch network, I don’t think that we ever envisioned that we would be supplying staffers to this semi-free market, semi-populist president. But we’re happy that he’s picking people who have that free market background, particularly because on many issues, [Trump] is a blank slate, so anybody with expertise is in an amazing position to shape his agenda.”

A new report by the government accountability group Public Citizen finds that the Kochs have done just that. Public Citizen—a vocal critic of Trump that has filed several lawsuits against his administration—counts 44 different Trump administration officials who have close links to the Kochs and their sprawling network.

That list starts at the top of the administration—Vice President Mike Pence is a longtime ally of the Kochs—and includes senior and junior figures throughout the White House and the various agencies overseeing the functioning of the government. Marc Short, the White House’s point man on dealing with Congress, is a former president of Freedom Partners Chamber of Commerce, the political nerve center of the Koch network. White House Counsel Don McGahn represented Koch-backed groups in private practice. CIA Director Mike Pompeo—rumored to be the next secretary of state—represented the Kansas district where Koch Industries was headquartered, giving him the nickname “the congressman from Koch.”

Then there are the dozens of lesser-known yet still influential administration jobs filled by Koch alumni. A few examples:

It should come as no surprise that, as Public Citizen’s report documents, the Kochs’ deregulatory wish list has become something of a blueprint for the Trump administration. In January, Freedom Partners released a two-page document titled “A Roadmap to Repeal,” which outlined nearly 20 deregulatory policy moves the new administration could undertake. As Public Citizen notes, the bulk of those actions—including an exit from the Paris climate accords, the repeal of an Obama executive order that blocked new leases for coal mining, and steps to end the EPA’s historic Clean Power Plan—have been undertaken by Trump and his administration.

To anyone who followed the 2016 presidential campaign, the coziness between Trump and Kochworld comes as something of a surprise. The Kochs were no fans of Trump and largely sat out the general election between Trump and Hillary Clinton, instead pouring their funds into congressional and state races. As a candidate, Trump turned down a meeting with the Kochs and tweeted that he didn’t want the Kochs’ money “or anything else from them”:

I really like the Koch Brothers (members of my P.B. Club), but I don't want their money or anything else from them. Cannot influence Trump!

He mocked other Republican candidates for their courting of the Koch brothers with a steady stream of tweets:

.@CharlesGKoch is looking for a new puppet after Governor Walker and Jeb Bush cratered. He now likes Rubio–next fail.

Little Marco Rubio, the lightweight no show Senator from Florida, is set to be the "puppet" of the special interest Koch brothers. WATCH!

While I hear the Koch brothers are in big financial trouble (oil), word is they have chosen little Marco Rubio, the lightweight from Florida

As president, however, Trump has shown no aversion to enlisting dozens of Kochworld alumni and Republican lawmakers who have long done the Kochs’ bidding. Public Citizen casts Trump’s embrace of Kochworld’s denizens and policy ambitions as a betrayal of his campaign’s populist streak. “The presence of so many Koch-affiliated political operatives in the Trump administration underscores how Trump has betrayed his supporters and contradicted his pledges to stand up for forgotten Americans against powerful interests,” the report concludes.

As for the Kochs themselves, they’re riding high. The Washington Post reported in January that more than 550 people were set to attend their biannual donor enclave, the most ever for a Koch gathering. The Kochs have said they’re prepared to spend between $300 and $400 million in the 2018 campaign cycle on politics and policy to push their laissez-faire, deregulatory worldview.

And with the Trump administration in power, they’ve found a more than willing ally.