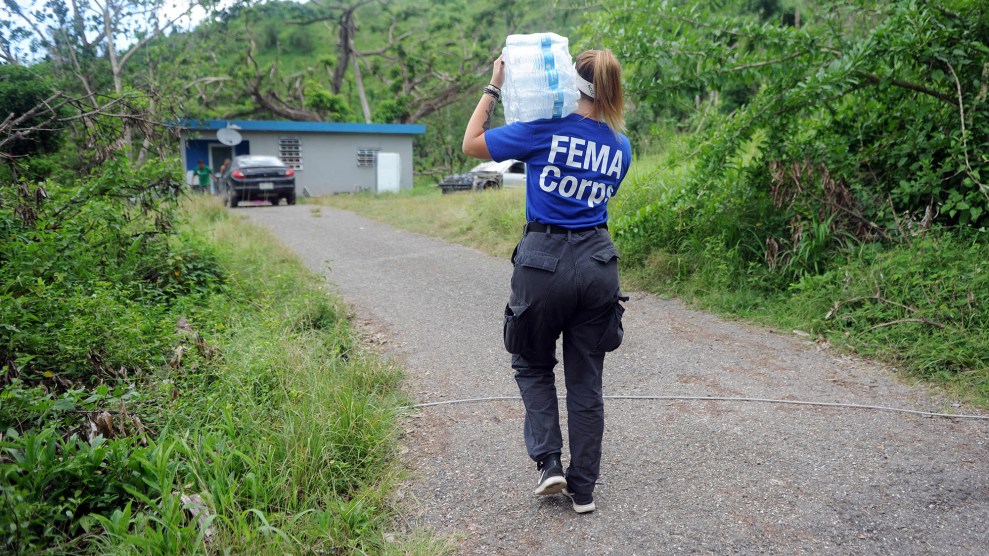 On Wednesday, the Federal Emergency Management Agency will be “shutting off” food and water delivery in Puerto Rico despite protests from local authorities that thousands of people still rely on the deliveries more than four months after Hurricane Maria devastated the island.

“There are some municipalities that may not need the help anymore, because they’ve got nearly 100 percent of their energy and water back,” says Carmen Maldonado, the mayor of Morovis, a town in the north-central mountainous part of the island. “Ours is not so lucky.”

Maldonado says a third of her town’s 30,000 residents are still receiving FEMA food and water aid, and that 80 percent remain without electricity. While Puerto Rican government estimates show that roughly 70 percent of the island’s electricity subscribers have had power restored, hundreds of thousands of homes are still dark. The mayor explained that people have been forced to scrape money together to buy fuel to power generators, leaving less to purchase food and water. Without refrigeration, many have turned to rely on FEMA food deliveries. “This is all something FEMA should contemplate before eliminating its delivery of these supplies,” Maldonado told NPR, which first reported on the agency’s decision on Monday.

A spokesperson for Puerto Rico Gov. Ricardo Rosselló had no immediate comment.

The agency told NPR that it had determined that only 1 percent of island residents still needed food and water deliveries, a small enough number for the island’s government and nonprofits to handle. Additionally, the agency argued to NPR, free supplies were deterring people from shopping, and hindering economic recovery.”If we’re giving free water and food, that means that families are not going to supermarkets to buy,” Alejandro De La Campa, FEMA’s director on the island, told NPR. “It is affecting the economy of Puerto Rico.”

On Wednesday morning, an agency spokeswoman tweeted that the mission “continues,” and that FEMA will continue to support “documented needs.”

Our support to Puerto Rico’s recovery continues. The commercial supply chain for food/water is available. However, @FEMA will continue to support documented needs that Puerto Rico identifies, & we’re providing supplies to voluntary agencies/nonprofits for those in rural areas.

When asked what “documented needs” meant in this context, a FEMA spokeswoman said that “local leaders know their communities and needs best,” and “they will identify to us any continued needs.”

After publication, FEMA provided a statement by Public Affairs Director William Booher reiterating the points in the spokeswoman’s tweet, and pledging to “continue to support the Government of Puerto Rico to meet the needs they identify.” The agency said it had already distributed nearly $2 billion in food aid, including 65 million liters of water and 58 million meals and snacks, and now planned to store lower levels on the island for distribution if needed.

Eduardo Meléndez, a local photographer who has been documenting problems on the island since the storm, tells Mother Jones that the agency’s decision “will make things much worse” for vulnerable communities. “There are people who are looking for the food aid because four months into Maria they have not been able to find jobs,” Melendez says. “Forty five percent of Puerto Ricans are still without power. So even if you can buy groceries, where will you store them?”

“It’s hard to keep the composure when streets are filled with rubble, jobs are scarce, and no one seems to care any more,” says Melendez. “And what’s worse is that the next hurricane season is right around the corner.”