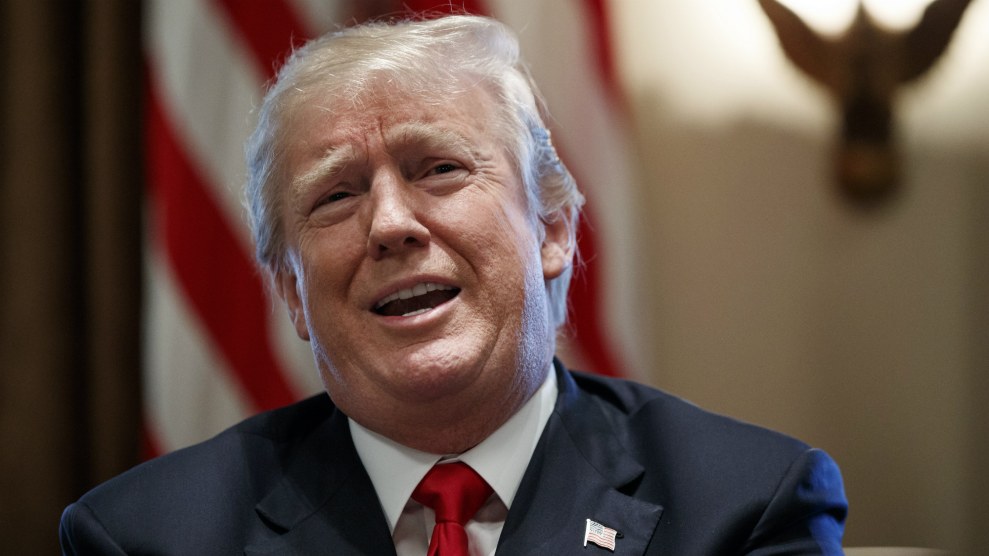 One year ago today, on January 11, 2017, Donald Trump held a bewildering press conference, where he roamed from fierce denials of the most licentious details of the so-called Steele dossier to insistence that he had no conflicts of interest (because, he asserted, presidents couldn’t have conflicts). Standing in front of a stack of papers that he said represented signed agreements to separate himself from his business empire (but which were very possibly just stacks of blank paper), Trump trotted out his attorney, Sherri Dillon, to explain the steps he was taking, which included placing his assets in a trust—though not a blind one as ethics experts had advised—and turning day-to-day control of his company over to his sons. Dillon assured the public that she saw no ethical concerns with Trump continuing to have complete ownership of his sprawling business empire, much of which is overseas or caters to high-end foreign visitors to the US, while serving as president.

At the time, many ethics experts were raising questions about whether Trump’s businesses created a violation of the Constitution’s emoluments clause, which prohibits high office holders from accepting payments from foreign royalty, as was the custom at the time the provision was drafted. But did the clause apply to a modern president such as Trump, whose luxury Washington hotel pitched itself as the perfect setting for embassies to hold soirees? As long as Trump maintains ownership of his businesses, the profits, including those derived from foreign government sources, flow directly into his pocket. A slew of lawsuits have been filed to settle the emoluments question. In late December, a New York judge ruled in one of them, rejecting a civil lawsuit filed by a watchdog group and several New York City restaurants. The decision specifically pointed to Congress as the correct venue to address the matter.

Yet congressional Republicans, for obvious reasons, have been reluctant to take up the matter, despite continuous pestering from Democrats. On Thursday, Democratic members of the House oversight committee sent a new letter to the committee’s GOP chairman Rep. Trey Gowdy, demanding an investigation into Trump’s compliance with the emoluments clause. (Gowdy’s office did not respond to a request for comment.) Among other things, the letter (which can be read in full here) cites a memo circulated within the Trump Organization explaining how to track money from foreign governments; it is most notable for its focus on not inconveniencing guests. (Trump previously has said he will donate profits from any business with foreign governments to the federal treasury, but he has offered no details on how this process will work.)

The Democrats’ letter asks Gowdy to issue subpoenas to force the Trump Organization to turn over information on how profits from foreign business are calculated and set aside.