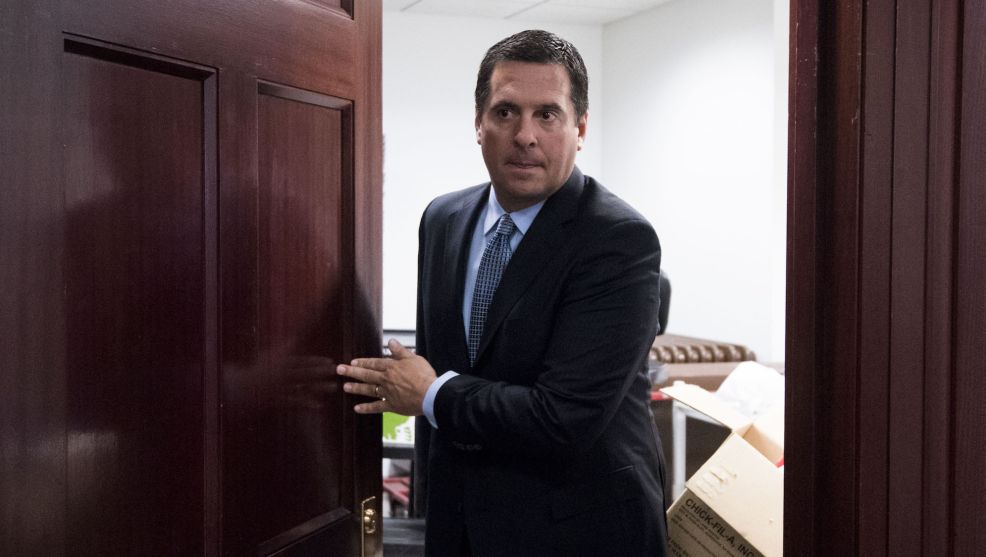 Rep. Devin Nunes (R-Calif.) won’t #releasethememo. The now infamous document was prepared by Republican staffers for the House Intelligence Committee, which is chaired by Nunes, and it supposedly details how the FBI and the Justice Department improperly conducted surveillance in connection with the Trump-Russia probe. Conservatives looking to discredit the Russia investigation have embraced the classified memo, though they haven’t seen it, and have called for its release. But Nunes has so far insisted on keeping it secret—even from the Justice Department.

“We requested to see the memo and have not been given access to read it,” a Justice Department source tells Mother Jones. The FBI has also been denied access to the document, the Daily Beast revealed on Sunday.

The memo reportedly asserts that federal officials abused their power by seeking a warrant targeting a Trump campaign adviser under the Foreign Intelligence Surveillance Act (FISA) without disclosing that evidence cited in the application relied on research by former British spy Christopher Steele. The ex-MI6 officer, who once ran the spy agency’s Russia desk, was working for a firm that was paid by Hillary Clinton’s presidential campaign and the Democratic National Committee.

The four-page memo has become a cause célèbre on the right, with assorted Trump backers, alt-righters, and congressional Republicans taking to Twitter with demands that someone “#releasethememo.” Donald Trump Jr. and Michael Flynn Jr., who have both come under scrutiny in the course of special counsel Robert Mueller’s investigation into Trump’s Russia ties, have joined the online chorus calling for the memo’s release. Also helping the #releasethememo campaign reach trending status: a network of Russian bots.

I have read the memo. The sickening reality has set in. I no longer hold out hope there is an innocent explanation for the information the public has seen. I have long said it is worse than Watergate. It was #neverTrump & #alwaysHillary. #releasethememo

Republican members have trumpeted the secret document as full of shocking information about FBI misconduct. But Nunes seems to be in no hurry for the document to see the light of day. His failure to make it public—or even share his findings with the Justice Department or FBI for their feedback—evokes his effort last spring to divert focus from suspicious contacts between the Trump campaign and Russia by ginning up a counter-controversy over the “unmasking” of surveillance targets. He never provided any evidence to back up his allegations of wrongdoing, and after reviewing classified material that Nunes touted, both Democrats and Republicans said his claims did not hold water.

The Intelligence Committee, at Nunes’ behest, voted along party lines last week to share the document with other members of the House. But that vote does not authorize the memo’s public release, House aides say. Under House rules, that step requires a separate committee vote. If the committee votes to declassify the memo, the president would be notified. He’d have five days to object in writing, through a certification saying the document’s release poses a threat to the national interest that outweighs the public interest in making it public. If he doesn’t object, the committee could release the information. A Nunes spokesman did not respond to questions about whether the congressman would seek a vote to make the memo public.

The memo appears to be part of a broader right-wing effort to derail Mueller’s Russia probe by discrediting the Justice Department and the FBI. The FBI’s investigation into Trump’s Russia ties began before Steele provided the bureau with his memos detailing a Russian effort to aid Trump in the 2016 election and stated that the Kremlin possessed compromising material on the candidate. Trump’s allies have been trying to make the case that the Russia investigation is rooted in the Steele “dossier” and thus was tainted from the start because Democrats funded some of his research. (Fusion GPS, the research firm that hired Steele, was initially working for the Free Beacon, a conservative publication that opposed Trump’s bid for the Republican presidential nomination.)

Rep. Adam Schiff of California, the top Democrat on the Intelligence Committee, last week called the memo “a profoundly misleading set of talking points drafted by Republican staff attacking the FBI and its handling of the investigation.”

“This may help carry White House water,” he added, “but it is a deep disservice to our law enforcement professionals.”