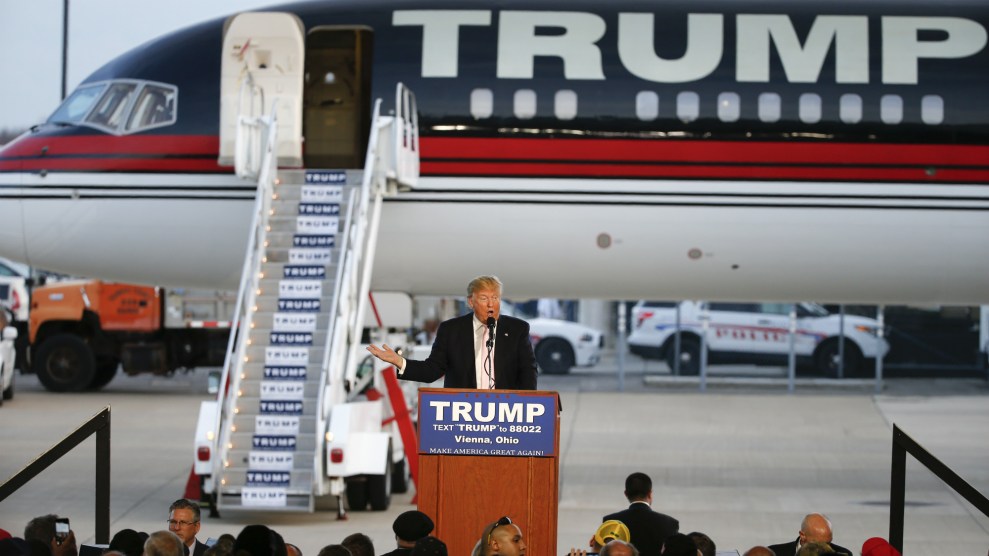 President Donald Trump has never been shy about taking credit for things that he didn’t do. On Tuesday morning, he tried to snatch credit for making air travel safe again. “Since taking office I have been very strict on Commercial Aviation,” he tweeted. “Good news – it was just reported that there were Zero deaths in 2017, the best and safest year on record!”

Since taking office I have been very strict on Commercial Aviation. Good news – it was just reported that there were Zero deaths in 2017, the best and safest year on record!

Unsurprisingly, Trump’s boast is bogus. US commercial aviation deaths have not, in fact, fallen on his watch. What’s more, the Trump administration, with the help of airline lobbyists, has actually made air travel more difficult, more painful, and arguably more dangerous for some of the most vulnerable Americans.

Trump’s claim on air travel safety stems from a New Years Day announcement by aviation experts that 2017 was the safest year for air travel globally—a Dutch aviation consulting firm and the Aviation Safety Network both reported that there were zero deaths involving commercial jet airline travel last year. There were actually 10 fatal commercial plane crashes in 2017—resulting in 44 passenger and crew fatalities and 35 deaths on the ground—but those included turbo-prop planes and cargo planes. Regardless, it’s an impressive number considering it includes the entire world.

And, because it includes the entire world, it also has very little to do with Donald Trump or any of the policies he might have enacted as US president. In fact, American commercial airline travel has gone years without a death—an easily documentable fact.

Commercial airline deaths in the U.S. by year:

In his tweet, Trump cited no specific “strict” actions that he took or new rules or regulations that the Federal Aviation Administration or Department of Transportation might have created in 2017 to make air travel safer—in the United States or anywhere else. The reality is that new rules and policies take years to implement.

In reality, the Trump administration’s most visible actions related to air travel were its efforts to unravel rules designed to protect passengers. For example, just a few weeks after taking office, Trump’s DOT froze a rule that had been in the works for five years that would have forced airlines to disclose how many wheelchairs they damage or break each month. It seems like a relatively simple rule—one that would have allowed disabled passengers to get a basic sense of how specific airlines handle the highly sophisticated, and highly expensive, wheelchairs they rely on. The rule was supposed to go into effect yesterday—January 1, 2018—but after some prodding from the airline industry, Trump’s DOT decided to delay its implementation.

In September, we reported on how devastating the decision, which was made with no public hearing or input, was to disabled Americans who wanted to travel by air:

When Larry Dodson travels, he doesn’t bother with planes anymore—as a quadriplegic who relies on a $30,000 custom wheelchair for his mobility and health, he can’t afford the risk of picking the wrong airline. The last time the 70-year old Vietnam veteran took a flight, airline employees lost his wheelchair, leaving him stranded in an uncomfortable airport wheelchair, in the middle of a public terminal area while they searched for it. The lengthy ordeal, which involved moving from one uncomfortable temporary chair to another, led to pressure sores on his skin that his wheelchair would have prevented, says Dodson. He had to spend three days recovering in bed.The Trump administration abruptly delayed a new rule that would have required airlines to reveal how often the break or lose wheelchairs.

“My chair is 350 pounds and it’s rather hard to lose, but it got lost, and we went through the whole thing of getting me transferred from an aisle chair to a wheelchair,” he says.

Dodson’s story seems to be fairly common. His chair has also been repeatedly broken by airlines, and as the national secretary of Paralyzed Veterans of America, he hears about airlines breaking or losing wheelchairs on a regular basis. Still, no one knows just how common it is or which airlines are the worst offenders. There is literally no transparency when it comes to how airlines handle wheelchairs—they are not required to keep or publicly release data on the chairs and motorized scooters they carry.

Dodson’s group, Paralyzed Veterans of America, filed a lawsuit to try and force the administration to implement the rule as originally planned, but that suit remains pending. With the targeted start date now past, the airlines have essentially won the battle against disabled passengers. So, how did they convince the Trump administration to freeze the rules that would help passengers in wheelchairs?

Airlines are a powerful force in Washington, and Airlines for America (as the Air Transport Association is now known) is the driving engine. Since 2011, the group’s PAC and top executives have donated more than $1.6 million to federal candidates, and over the six years the wheelchair rule was under consideration, the group spent $38.1 million on federal lobbying. This year it is on track to spend $7.5 million if it continues on the current pace of spending.

According to the public docket—an official file detailing important communications in the rulemaking process—on January 27, David Berg, a lobbyist for Airlines for America, wrote to the DOT to request that a slew of new rules, including the wheelchair rule, be delayed. Berg cited a letter issued by Trump’s then chief-of-staff, Reince Priebus, announcing the administration would put a freeze on new rules. Berg didn’t provide any other reasoning for why implementation of the wheelchair rule should be halted. Within days, a DOT official responded that the agency would delay the implementation of several rules but did not mention the wheelchair rule. On February 27, in a friendly follow up email to DOT official Blane Workie, another Airlines for America lobbyist, Doug Mullen, inquired about delaying the wheelchair rule.

Just three days later, Mullen sent another email asking for news on whether the wheelchair rule and another rule about mishandled baggage would be delayed. This time, the lobbyist finally explained why the industry wanted a delay.

“Industry is facing some real challenges with both parts of this regulation and will need more time to implement it,” Mullen wrote. “We will be in touch with more information in the near future.”

The very same day, the DOT complied. The agency’s deputy counsel, Judith Kaleta, issued a notice that the wheelchair rule would now be delayed until January 2019.

You can read our full story here.