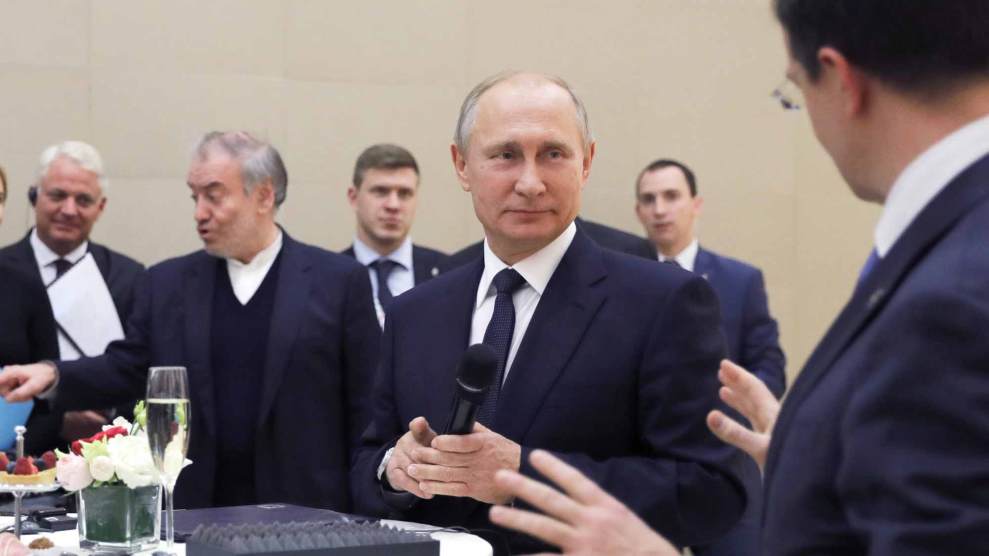 Last August, Congress sent President Trump a clear signal that he could not be trusted when it comes to Russia; A near-unanimous, bipartisan majority delivered a bill to the president’s desk imposing new sanctions on the country, while also slashing his office’s power to ease those restrictions. Trump, under scrutiny by federal investigators for possible collusion between his presidential campaign and the Kremlin, had little choice but to sign the bill into law.

A key deadline imposed by that law that may further test the administration’s willingness to be tough and transparent on Russia comes today, as the Treasury department must send Congress a report identifying the most influential Russian oligarchs, measuring their closeness to Putin and their net worth. While being included carries no formal legal consequence, the Russian business community has still been bracing for the release of this “black list” for months—and even working connections in the US to keep their names off it.

“The business elite in Moscow started flipping out…I frankly did not know how important the report would become.”

The law’s wording makes it unclear whether or not the list will be made public, and who might be included. What has become clear, though, is that Russia’s businessmen—some of the world’s wealthiest people—see this government-created list, though informal, as endangering their fortunes, reputations, and connections in the West and potentially exposing them to future additional sanctions.

According to one source who spoke with Mother Jones, a number of Russians have sought to influence the list by seeking meetings with members of the handful of House and Senate committees that typically oversee sanctions policy. Elizabeth Rosenberg, a former Treasury sanctions official now at the Center for a New American Security, tells Mother Jones that some Russians have arranged for emissaries to meet with lawmakers in their home states. Spokespeople for two relevant committees and several lawmakers did not reply to Mother Jones requests for comment.

Efforts to evade the list began almost immediately after Trump signed the sanctions law in August 2017. “The business elite in Moscow started flipping out,” says Dan Fried, a fellow at the Atlantic Council who worked at the state department coordinating Russian sanctions policy during the Obama administration. Fried says he’s fielded about 20 calls from lawyers and others seeking advice for often unnamed Russian clients. Some dropped hints that hefty consulting fees would be available to anyone who could help their clients get off or stay off the list. Fried says he rejected any such offers, but views them as a sign of how seriously Russia’s richest are taking the list: “I frankly did not know how important the report would become.”

Since inclusion on the list depends on the size of the oligarch’s fortune and the strength of their ties to Putin, speculation has arisen that wealthy Russians may be taking steps to obscure their fortunes or distance themselves from the Kremlin. As the Bell, a respected Russian news startup, has pointed out, eight days after Trump signed the sanctions bill, Mikhail Prokhorov, a billionaire who owns the Onexim investment fund and the Brooklyn Nets, finalized the sale of a 7 percent stake in Rusal, an aluminum giant run by a key Putin ally. He sold off more of his stake several months later, raising questions as to whether the sale was partly an effort to preempt the Treasury report. While Prokhorov was in talks over the sale months before the sanctions law was signed, he has declined to reveal why he chose to decrease his stake.

Lawyers to oligarchs have even suggested that billionaires might divorce their wives on paper and re-register assets in their ex-wives’ names, according to a source interviewed by the Bell. Billionaire investor Roman Abramovich did announce plans to divorce his wife Daria Zhukova on August 7, five days after Trump signed the sanctions bill, though sources close to the family told the Bell their decision predated the US law. While billionaire and aluminum magnate Oleg Deripaska—a Putin confidante who conducted about $60 million worth of business dealings with now-indicted former Trump campaign chairman Paul Manafort—signed over a 7 percent stake in his holding company to his wife Polina this fall, a Deripaska associate told the Bell the sale had nothing to do with the new sanctions bill.

Lawmakers appear ready to increase the pain by harnessing the list to box in Putin.

Several oligarchs have reportedly taken steps to avoid public interactions with the Russian president. A staffer to one billionaire said his boss had adjusted his schedule and “simply been trying lately to show up less next to Putin,” according to Reuters, which agreed not to identify the billionaire, but described him as having previously “sat on panels of business leaders with Putin and in the front row of the audience when Putin addressed conferences.”

Kremlin spokesman Dmitry Peskov has blasted the list as a United States plot to force Putin’s allies to distance themselves from him, or even turn them against him at a critical moment; the Russian presidential election is in March.

Some Russians have already conducted analyses of what being named to the list could mean for their investments. At least four major Russian companies owned or controlled by Putin-connected billionaires—Rusal, Alfa Bank, fertilizer company PhosAgro, and gold producer Polyus—have rushed to seek financing, concerned that the list’s publication could limit future access to western capital.

The oligarchs’ efforts to avoid the list reveals how concerned they are about it, says CNAS’s Rosenberg, even though the list will not have any legal force or impact formal sanctions. “This is a very powerful response for merely a report,” says Rosenberg. “Because the Russians have been making this into a very big deal, it has signaled to US legislators that they touched a nerve.”

In fact, lawmakers appear ready to increase the pain by formally harnessing the list as a means to box in Putin. Earlier this month, Sens. Marco Rubio (R-Fla) and Chris Van Hollen (D-Md.) introduced a bill that would, in the event of future Russian election interference, require the list’s release and impose sanctions on its members, blocking their assets and ability to enter the US.

“It creates this major incentive for any wealthy Russian to lobby Putin not to interfere in a future election,” says Edward Fishman, a senior fellow at the Atlantic Council who formerly designed and advised on Russia sanctions at the State Department.

If the list remains secret, the administration could avoid another public complication in its relationship with Russia. But members of congress are likely to call for its release.

“If the list were publicized, it would amount to something like a sanction,” says Fishman, because it may encourage companies to ditch business with these oligarchs out of an abundance of caution.

Compounding the concern about this list among Russia’s business elite is the fact that they don’t how long it will be. It could be narrow, focused on the handful of oligarchs closest to Putin that aren’t already under sanctions. But the authorizing law’s criteria describing who should end up on the list are quite broad, and, according to one former Treasury official, could be interpreted to include hundreds of Russians.

This week in Davos, the newspaper Vedomosti asked Russian businessmen about the list as they attended the Swiss resort town’s annual gathering of the global elite. A top Russian bank manager told a reporter that some businessmen had tried to avoid the list, but he seemed resigned that it was to late to do anything else. For those who are already on Treasury’s “radar,” he lamented, such efforts are now “useless.”