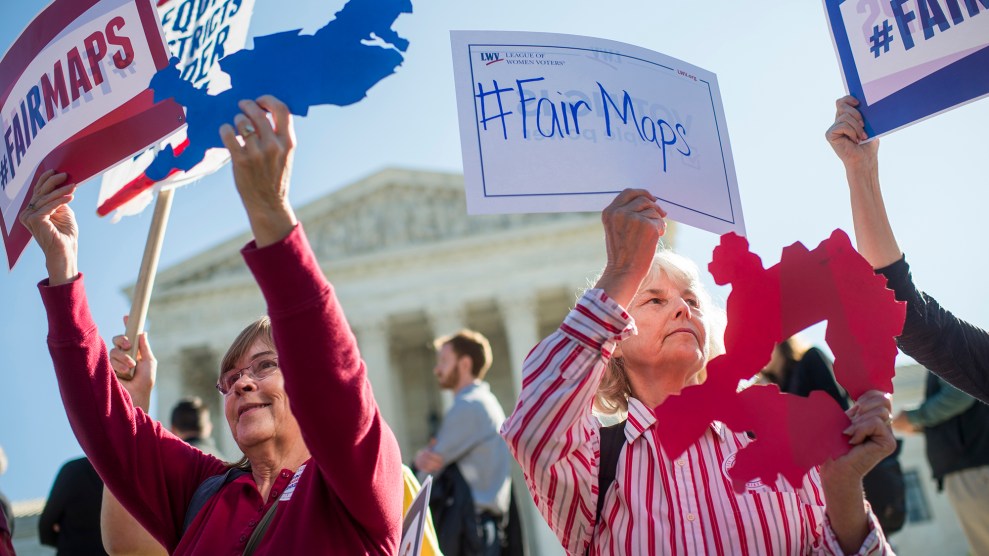 Shirley Connuck, right, of Falls Church, Va., holds up a sign representing a district in Texas, as the Supreme Court hears a case on possible partisan gerrymandering by state legislatures on October 3, 2017. Tom Williams/CQ Roll Call via AP

The US Supreme Court on Friday agreed to hear two racial gerrymandering cases out of Texas after a federal district court found the state’s political maps intentionally discriminate against minority voters. This is the third major redistricting case the court will hear this term that has the power to shape political maps across the country.

This summer, a three-judge panel in San Antonio found that Texas Republicans intentionally weakened the voting power of African American and Latino voters when it drew multiple state House and congressional districts. This was the ninth racial discrimination in voting case the state has lost since 2011, which includes a long legal battle over its stringent voter ID requirement. Now, the Supreme Court will determine whether Texas’ maps can stand.

The Supreme Court’s decision to take the case is not surprising. The court’s conservative majority signaled sympathy with Texas Republicans in September when the five conservatives, including Justice Anthony Kennedy, blocked the lower court’s order to redraw Texas’ maps until the high court could rule on the case. The four liberal justices dissented from the order. This means Democrats and voting rights advocates will face an uphill battle when the court hears this case.

After Texas created new maps in 2011, a federal district court in Texas this year found that certain districts in those maps—as well as slightly altered maps adopted in 2013—were drawn in a way that discriminated against Hispanic and African American voters. The court also found that the Republican-controlled legislature intentionally discriminated in creating those districts. The issue of intentionality is important because it allows the courts to place Texas under a process laid out by the 1965 Voting Rights Act called “preclearance,” under which all changes to elections would have to be approved by the federal government. Courts have repeatedly found that Texas sought to undercut the power of minority voters through its political maps, voter ID law, and other election reforms. The state has lost nine racial discrimination cases since 2011.

Before the end of the Supreme Court’s term this summer, the justices will have weighed in on racial gerrymandering in Texas and partisan gerrymandering in Wisconsin and Maryland. Additionally, Republican lawmakers in North Carolina today asked the court to also overturn a recent federal court finding of unconstitutional partisan gerrymandering against the state’s congressional map. The decisions the justices make in the next six months could determine control of the House of Representatives in 2018, but they are certain to shape political maps following the next round of redistricting after 2020 and beyond.