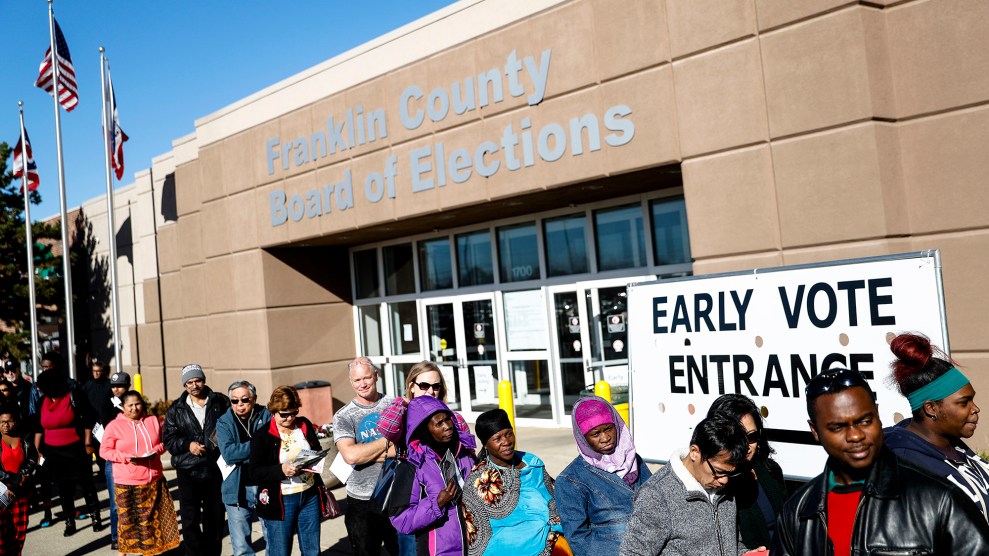 A line of early voters on November 7, 2016, in Columbus, OhioJohn Minchillo/AP

When it comes to purging names from the voter rolls, the state of Ohio is second-to-none. Since becoming secretary of state in 2011, Republican Jon Husted has excised more than 2 million voters from the state’s registration lists. On Wednesday, the US Supreme Court will hear arguments in a high-stakes case over whether one of Husted’s controversial methods for removing voters violates federal law. And if the court sides with Husted, it will open the door for states across the country to use what amounts to a legal loophole to cancel the registrations of millions more Americans.

The controversial Ohio program is just the newest version of a century-old strategy of culling voter lists. Though less well known than other historic forms of voter suppression—such as poll taxes, literacy tests, and all-white primaries—purges have long been used to limit the influence of ethnic and racial minorities. And just like these more explicitly racist policies, purges have frequently been justified as a necessary antidote to voter fraud.

People in Democratic neighborhoods were struck from the rolls at twice the rate of people in Republican areas.

Ohio’s process for culling its rolls has been criticized as a “use it or lose it” program. Every year, the secretary of state mails a notice to every registered voter who has not cast a ballot in the previous two years, asking that they return the mailing to confirm their continued eligibility. If they fail to respond and then fail to vote over the next four years, they are removed from the rolls. Ohio has been using this method since 1994, but in 2014, in response to a lawsuit by the conservative group Judicial Watch, Husted agreed to begin sending notices every year instead of every other year.

Civil rights groups say that Ohio’s policy discriminates against minorities, who tend to vote less often, and that it prevents eligible voters from casting ballots. According to a Reuters analysis of voter rolls in Ohio’s three largest counties, people in Democratic neighborhoods were struck from the rolls at twice the rate of people in Republican areas. Moreover, Reuters notes, “neighborhoods that have a high proportion of poor, African-American residents are hit hardest.” Five other states use similar processes to purge their voter rolls, but Ohio’s program is the most aggressive.

In 2016, opponents of Ohio’s voter purge program sued, arguing that it violates the National Voter Registration Act (NVRA), which prohibits states from using a resident’s failure to vote to trigger deregistration. If the plaintiff in the case had voted in past elections, they say, he never would have been removed. The Sixth Circuit Court of Appeals agreed, and Husted subsequently reinstated thousands of purged names in the fall of 2016. As a result, about 7,500 people who would otherwise have been unable to vote ended up casting ballots in the November 2016 election.

But after the election, Husted appealed the ruling. “[M]aintaining the integrity of our elections and guarding against voter fraud is too important to do nothing,” Husted said in a statement last year. He argues that the program doesn’t technically violate the NVRA because failure to respond to the mailed notice—rather than a failure to vote in and of itself—is the “proximate cause” of a canceled registration. Federal law allows a notice-confirmation process, he contends, but does not dictate how states should decide who receives these notices. The fact that the Supreme Court agreed to hear the case suggests that at least some of the justices are considering allowing states to use this loophole to resume the age-old practice of singling out voters for removal on the basis of inactivity.

In the past decade, many states have enacted registration and voting restrictions that have a disproportionate impact on minority voters, from rolling back early voting days to implementing strict voter ID laws. Ohio has done both. Like these reforms, the state’s voter purge program should be viewed “as part of a larger pattern that’s emerging in the last 10 years or so as a way to either disenfranchise or…limit the influence of the votes of particular groups,” says Orville Vernon Burton, a historian at Clemson University who has testified as an expert witness in opposition to voter identification laws in Texas and South Carolina. “Now we’re in a process of passing laws that are clearly partisan and political in nature to keep people from voting.” The justification for these policies—that they will combat voter fraud—has been received with skepticism and disbelief by many historians and election experts, in large part because the actual incidence of voter fraud is extremely low.

The practice of purging voters from the rolls based on a failure to vote dates back to the early 20th century, when cities began to keep permanent voter lists and often maintained them by canceling the registrations of people who had not recently cast a ballot. The official reason for these purges was to keep the voting rolls accurate and prevent fraud by political machines such as New York’s infamous Tammany Hall. But the purges had the effect, often purposeful, of disenfranchising Irish, Italian, and Jewish workers, as well as other minority groups. Several states forced voters in large, immigrant-heavy cities to re-register annually but ignored evidence of corruption in rural company towns, notes Harvard University historian Alexander Keyssar in The Right to Vote: The Contested History of Democracy in the United States. In a more blatant attempt to block Jewish voters who might support socialist candidate Eugene V. Debs, in 1908 New York City’s registration days were limited to the Sabbath and Yom Kippur.

By the 1960s, Americans were voting at significantly lower rate than citizens of other western democracies. In 1963, the President’s Commission on Registration and Voting Participation singled out restrictive registration laws and administrative hurdles such as purges of voter who skipped elections. The commission noted that an “unexpected business trip or a broken ankle can deprive a citizen of his right to vote” and that this failure to cast a ballot then means the person “cannot vote now.”

“The idea of voter fraud is an old canard that’s been used from time immemorial…when the party in power at the time is wanting to control the vote.”

Purging was not the only registration restriction that was justified, at least officially, as an attempt to combat fraud. In Texas, the architect of the state’s 1902 poll tax law described it as a fraud-prevention measure that would “protect the citizen against machine politics, convention dictation, and corrupt methods at the polls.” Texas continued to defend its poll tax in these terms until 1966, when a federal court struck it down as an unconstitutional tool to disenfranchise African Americans.

After losing in court, Texas set about replacing its poll tax with an annual re-registration requirement. Newspapers described the new policy as “patterned on the old poll tax system, but minus the tax.” Texas’ Democratic governor at the time, John Connally, framed it as a fraud-prevention measure. “Annual registration is the most logical means of preventing fraud and guaranteeing the purity of the ballot box,” he said. After a federal court struck this down in 1971, Texas passed a new law that would require every registered voter to re-register one time or be cut from the rolls. The Department of Justice blocked this mass purge under the 1965 Voting Rights Act. (In 2013, the Supreme Court invalidated the section of the law under which the DOJ had blocked this purge, stating that “things have changed dramatically” since the 1960s.)

“I think the idea of voter fraud is an old canard that’s been used from time immemorial almost, but certainly in my study of American history when the party in power at the time is wanting to control the vote,” says Burton. When he testified in the district court case over Texas’ 2011 voter ID law, he displayed a PowerPoint presentation that ticked through the state’s history of voting restrictions—from the all-white primary in 1895; through a law that prohibited aid to illiterate voters, the poll tax, and attempted purging; to the current voter ID battle. Each one, he noted, had the same rationale: preventing voter fraud.

Though the courts blocked Texas’ attempts to purge its rolls, that was the exception. Even after the civil rights movement, neither the courts nor the Justice Department cracked down on most purge methods, including laws elsewhere in the nation that purged registrations based on a past failure to vote. In a 1972 case, for example, a federal court upheld a Pennsylvania law that removed from the rolls people who hadn’t voted. The court did so despite evidence that nearly 60 percent of those removed for nonvoting were actually eligible. By the 1980s, 40 states and the District of Columbia had similar laws on their books. Ohio was one such state. Its constitution required the cancelation of any voter’s registration if he or she had failed to vote over a four-year period. Meanwhile, voter participation across the country continued to sink during the 1970s and 1980s. After the 1988 presidential election saw the lowest turnout in modern American history, Congress began to consider national legislation to fix the problem.

The result was the NVRA, a 1993 law that sought to increase opportunities to register to vote. Dubbed the motor-voter law, the bill’s best known provision required states to allow residents to register at their local DMVs. The law also placed limits on how states could remove voters from the rolls, including an explicit prohibition on purging voters based on a failure to vote. It is this provision that is being debated as the Supreme Court reviews Ohio’s case.

In a brief opposing Ohio’s purge policies, several historians, including Burton and Keyssar, argue that allowing Ohio to use non-voting to trigger the removal process would contravene the NVRA’s purpose. “Congress understood that the continued use of that practice contributed to the substantial voter turnout problem in the United States, particularly among African Americans and other minority groups,” the brief states. “Widespread use of voter inactivity as a trigger by States to initiate notice-confirmation processes would in turn result in broad swaths of Americans being mailed purge notices. And whether a significant proportion of the American electorate remain on the voter rolls would then hinge on whether or not registrants respond to those notices.”

Ohio isn’t hiding from the country’s long history of purging for inactivity. The state’s brief to the Supreme Court frames the practice as a time-tested tradition as American as apple pie. “By the 1950s, ‘[c]ancellation for failure to vote [had become] the principal means used in most permanent registration jurisdictions to purge the lists,'” Ohio’s brief states, quoting historical documents. “Ohio’s history exemplifies these trends.”

In the next few months, the Supreme Court will decide whether to resurrect this American tradition.