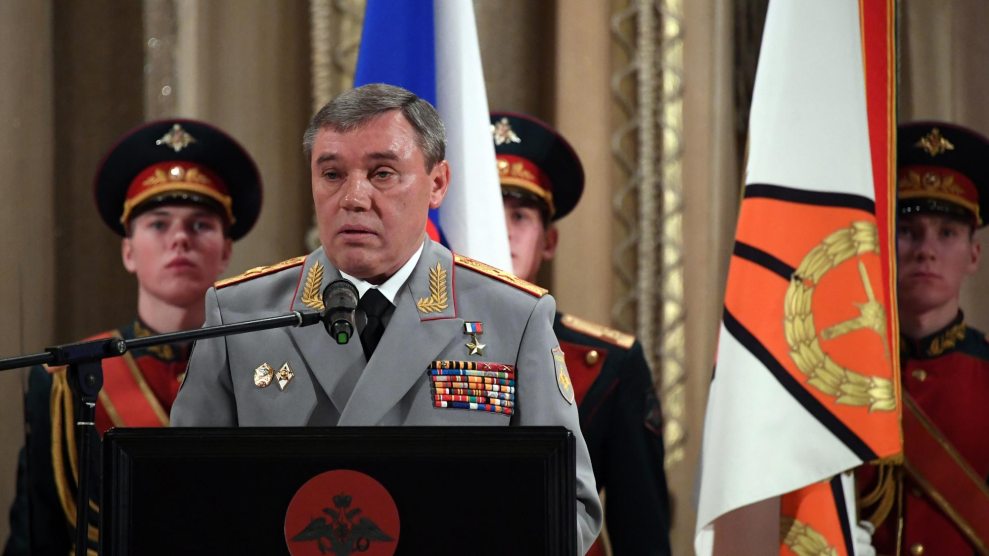 As the Mueller investigation continues to examine links between Donald Trump’s campaign and Russia, the Pentagon and the State Department are preparing for a slew of high-level meetings over the next two months with Russian government officials, BuzzFeed reported on Sunday.

The meetings include a gathering later in January featuring US Army General and NATO Supreme Allied Commander Europe (SACEUR) Curtis Scaparroti and General Valery Gerasimov, the chief of the general staff of Russia’s armed forces and the country’s top military official. It has been five years since the last similar meeting, which took place before the United States restricted military communications with Russia following its 2013 invasion of Ukraine.

While many Russia experts view the sit-down as a sign of growing US-Russia cooperation during a turbulent moment in their relationship, the conversations will have to sidestep one awkward detail: Gerasimov’s reputation as a prominent backer of deploying strategies like hacking and disinformation. He’s best known in the West as the author of a widely noted 2013 text outlining Russia’s modern-day approach to what’s become known as “hybrid war,” which discusses nonmilitary measures and cyberattacks of the style employed during the 2016 US presidential election.

Gerasimov is an of ally of President Vladimir Putin who has spent decades moving up the ranks of Russia’s armed forces. He joined the Soviet Army in 1977, serving in a number of posts across the USSR. He later commanded a division fighting in Russia’s second Chechen war and led the military districts covering St. Petersburg and Moscow. After becoming deputy chief of general staff of the Russian armed forces, Putin appointed him to Russia’s top military post in 2012.

Within months of taking the job, Gerasimov presented a report to Russian military and government leaders outlining methods then in development within the Russian armed forces. Gerasimov reworked the main points of the report into an essay published in February 2013 by Russia’s weekly military paper, Voenno-Promyshlenni Kurier (Military-Industrial Courier). Entitled “The Value of Science in Prediction,” the article described a new frontier of battle, where the lines between war and peace are “blurring” and where overt military measures are a last resort to be deployed after nonmilitary means—including disinformation, spying, and cyberattacks—have been exhausted.

“The very ‘rules of war’ have changed,” wrote Gerasimov. “The role of nonmilitary means of achieving political and strategic goals has grown, and, in many cases, they have exceeded the power of force of weapons in their effectiveness. The focus of applied methods of conflict has altered in the direction of the broad use of political, economic, informational, humanitarian, and other nonmilitary measures.”

Gerasimov’s essay seemed to urge Russia’s military to take up this multilayered strategy in dealing with its rivals in the West. “No matter what forces the enemy has, no matter how well-developed his forces and means of armed conflict may be, forms and methods for overcoming them can be found,” Gerasimov wrote. “He will always have vulnerabilities and that means that adequate means of opposing him exist. We must not copy foreign experience and chase after leading countries, but we must outstrip them and occupy leading positions ourselves.”

The strategies that Gerasimov described are, of course, as old as statecraft. But after Russia seized Crimea from Ukraine a year after the article’s publication—aided by Russian officers disguised as local civilian self-defense groups, a disinformation campaign, and hacks on the country’s power grid and key government agencies—Gerasimov’s essay resurfaced and was cast by Western observers as a prophetic articulation of Russia’s new military approach.

“The strategy, which came to be known as ‘hybrid war,’ was an amalgam that states have used for generations,” a New Yorker article noted last year. But soon “the text took on the status of a legend.” It became known as the “Gerasimov Doctrine,” and, especially in the wake of Russia’s interference in the 2016 US elections, the essay has garnered attention in the West, in military circles, congressional testimony, a US Army manual, and more.

Most Russia experts are careful to point out that Gerasimov is not the original architect of this hybrid strategy, and that his essay’s significance has been overblown. “The Russian policy toward warfare, even during Soviet days, has always involved these nonlinear asymmetric measures,” says Alina Polyakova, the David M. Rubenstein Fellow in the Brooking Institute’s foreign policy program. “This is how the Soviet Union did a lot of its influence operations abroad, and this is what’s been revived under Putin.”

Despite the essay’s roots in Gerasimov’s earlier report on Russian military activities and research, some Russia experts take issue with the interpretation that it was intended as a prescription for how Russia’s military should act, and instead see it as the general’s description of tactics employed by the West. “The paper outlined what he saw as the Western way of conflict, and how conflict was evolving based on how Americans and their NATO allies fought,” says Olga Oliker, the director of the Russia and Eurasia program at the Center for Strategic and International Studies. “That was interpreted somehow as Russian military doctrine, but it was really vague. It wasn’t about Russia.”

While Gerasimov’s reputation as the mouthpiece for Russia’s information warfare strategy may precede him, Polyakova notes that he is the appropriate contact for the US military to engage in productive dialogue with Russia.

“Those types of communications have been cut off since the Ukraine crisis happened. So the meeting is a good thing,” Polyakova says. “Whether we like it or not, Gerasimov is still the head of the Russian joint military. He is still in that position in the Russian government. So if the US or NATO want to have a dialogue with the Russians, he’s the person they have to talk to.”

Neither general has publicly confirmed the meeting, which is reportedly set for later this month in Baku, Azerbaijan. While the agenda remains unclear, Oliker anticipates that the pair will focus on practical matters, like reducing potentially dangerous confrontations between the nations’ forces on the Baltic Sea, and the possibility of increased military dialog. It’s unlikely that Gerasimov’s history with cyberattacks will come up, or his country’s role in the 2016 US elections.

“Military-to-military engagement needs to be pretty separate from the politics of it all—particularly if you have forces that are operating in proximity to one another, which you do with the Russians and the Americans,” Oliker says. “It has very little to do with Donald Trump.”