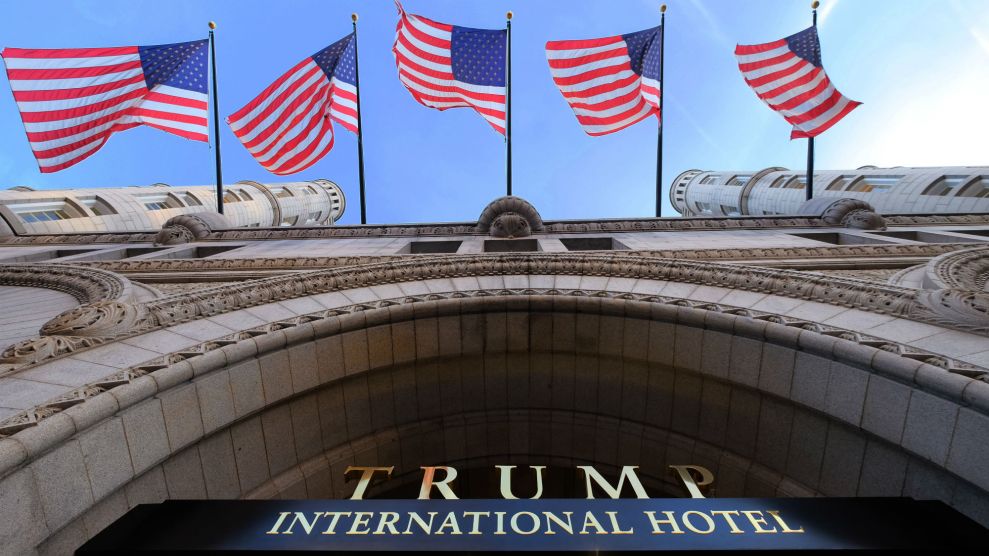 No president in modern history has run roughshod over the laws, guidelines, and norms of running an ethical and transparent administration like Donald Trump.

He’s refused to divest any of his business holdings or meaningfully separate himself from his company. He’s visited (and so promoted) his private properties and golf courses at a breathtaking clip: Of his first 362 days in office, Trump spent one-third of them—121 days—at a Trump property, according to NBC News. His business has cashed in on his presidency by hiking membership fees and peddling access. His aides have promoted Trump family properties and products. A year in, it is fair to describe the Trump administration’s approach to clean, ethical government as, well, nonexistent.

Below, six experts in clean government, ethics, anti-corruption, and transparency who have tracked the administration describe what they see as Trump’s most egregious ethical failings from his first year in office.

My first question is: I can only pick one? If the answer is yes, the biggest one is obviously going to be Trump’s continued ownership stake in his properties.

Government officials, foreign governments, outside organizations—any of them seeking to influence him or just have access to him can do so by frequenting his hotels, going to Mar-a-Lago. By spending money at his properties. To me it’s such a glaring deviation from what we expect from our elected officials. It’s really selling access and profiting off these properties, and everyone can have a go at it. That’s the biggest one.

Scott Amey, general counsel at the Project on Government Oversight

While the potential violations of the Constitution’s emoluments clause come to mind, I think President Trump’s failure to establish a genuine blind trust for all of his business assets and investments was particularly egregious. His decision bucked years of precedent to ensure the White House isn’t above the law, and as a result, every policy decision raises questions about whether his actions are in the best interest of taxpayers or Trump and his family. It’s really hard to take the president’s call to drain the swamp seriously when he’s standing in the middle of it.

I believe that the most significant are Trump’s repeated attacks on the institutions and norms that we rely on to hold government officials accountable—the structural protections for our democracy.

Here are a few examples: Trump (and others in the administration) repeatedly attack the press without foundation, the result being that his followers are less apt to believe press reports that contain negative information about him and his administration.

He has repeatedly interfered with independence of the FBI, such as by pressuring [James] Comey to demonstrate personal loyalty to Trump rather than loyalty to the legal principles and standards that apply; he fired Comey after it became clear that Comey would not end the FBI’s investigation of Flynn; when the FBI continues to investigate his campaign’s connections to Russia, Trump attacks the FBI publicly, attempts to undermine public trust in the agency.

He has attacked the independence of the Justice Department, insulting and threatening to fire Attorney General Sessions after Sessions remained recused from the Russia investigation, as required by DOJ regulations.

He lies with such abandon that he undermines the public trust in government information.

Biggest concern remains the Trump family (including the Kushners) seeking or receiving sweetheart deals from foreign governments or entities. Commercial activities with China, Russia, and countries in the Middle East are of immediate importance. These are of most concern because they are difficult to detect and can be enormously lucrative. And foreign powers can be winners and losers on a variety of issues from trade to national security, meaning they will be highly motivated to strike bargains.

I am going to pick a Trump declaration, which explains much of what has followed. Setting the tone for his future behavior, in November of 2016, Trump announced, “The law’s totally on my side, meaning, the president can’t have a conflict of interest.”

The fact that the president is exempt from some conflict-of-interest laws does not mean that he can’t have a conflict. It just means that certain presidential conflicts are not against the law. That is why previous presidents in recent years have acted in conformance with the laws, even if they were exempted.

This statement by Trump reflected his disdain for, and lack of, ethical norms. This was followed by his press conference in January of 2017, where he refused to divest himself from his businesses but claimed he would put them in a “trust” to be run by his sons to avoid the appearance of using his office for personal gain. But it later came out it was a revocable trust and he was still getting reports on the businesses and he could claim the profits. Against this background, he has routinely used the presidency to promote his Washington hotel, Mar-a-Lago resort, and golf courses.

In one sense, Trump is correct—he does not have any conflict of interest, as his only interest is self-interest.

Norm Eisen, senior fellow at the Brookings Institution, chair of Citizens for Responsibility and Ethics in Washington, and former ethics czar under President Barack Obama

There are so many candidates: the conflicts that arise from keeping his businesses; the exploitation of the presidency to promote them, with over 110 days spent at his own properties—about a third of his presidency; the refusal (unlike all his modern predecessors) to make his taxes available so we can fully assess his financial situation and how he benefits from, say, tax reform.

But to me the biggest is his incessant lying. After all, you can’t have ethics without honesty, and just 16 percent of what Trump says is true or mostly true. His worst lies are those about that pillar of our democracy: opposition and dissent. Whether it is his false attacks on the press, law enforcement, the intelligence community, or Democrats, the president is using distortion and misrepresentation to squeeze the space for disagreement. The normal brakes of honesty and decency do not stop him. It is nothing less than an assault on truth itself—and the attack in that value underlies so much else that is wrong with this administration. It is Trump’s greatest moral failure—and with so many others, that is saying a lot.