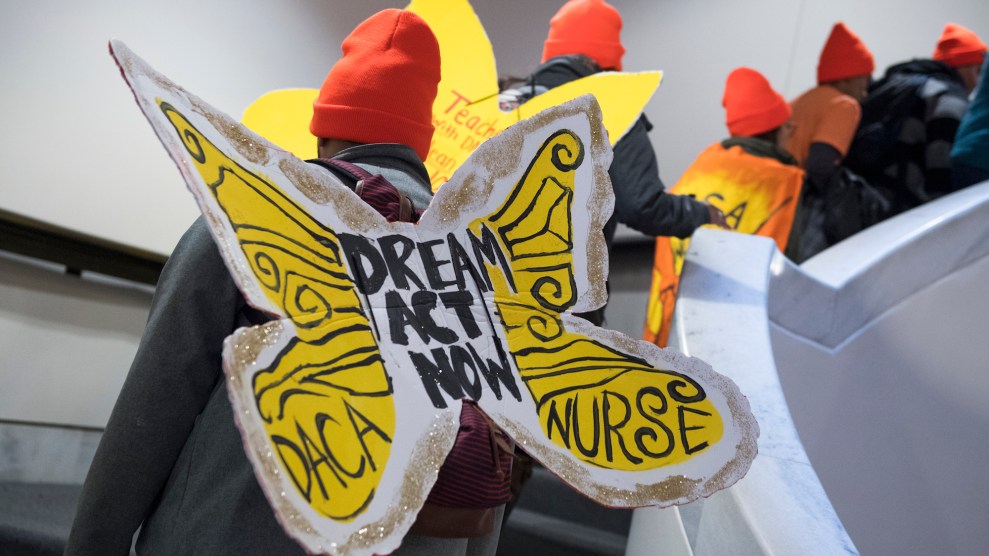 Demonstrators with United We Dream and others rally in the Hart Senate Office Building last month to call on Congress to pass legislation to protect Dreamers.Tom Williams/AP

Two days after House Minority Leader Nancy Pelosi delivered a record-shattering speech in defense of Dreamers—undocumented immigrants who came to the United States as children—immigrant advocates are blasting Congress for passing another spending bill that does nothing to protect them from deportation. But away from the Capitol and the headlines, something unexpected has happened: Dreamers are still extending their protections, and they may be able to keep doing so past the November elections.

Jeremy McKinney, a North Carolina-based immigration lawyer and the secretary of the American Immigration Lawyers Association, assumed the Trump administration would fight the decision at every turn. But even though Alsup didn’t impose a deadline for the administration to start accepting renewal applications again, four days after Alsup’s ruling, McKinney got word that DHS would accept applications. He and some of his staff came into the office the next day, a Sunday, to tell their clients about the news. McKinney knew the administration could try to block, or “stay,” Alsup’s injunction. His goal was to submit as many renewals as possible before then. But the Justice Department didn’t seek a stay. “I was shocked,” McKinney says.

Instead, the Justice Department has taken the rare step of appealing the decision straight to the Supreme Court. Its legal strategy means that applications for two-year DACA renewals are expected to remain open for months, and potentially all the way through the November midterm elections. With Congress showing few signs of reaching an immigration deal, DACA’s unexpected revival could prove essential to stopping many Dreamers from being deported.

How long DACA recipients will have to renew their status depends on what the Supreme Court does in the coming weeks. The Trump administration has made two unusual requests. The first was to ask the Supreme Court to take the case before an appeals court weighs in. Lawyers for the University of California, which is fighting to keep DACA in place, note in a court filing that the Supreme Court almost never does this. And when it does, it’s usually “in response to an urgent, overwhelming need for immediate resolution,” the lawyers note.

On top of that, the Justice Department is asking the Supreme Court to take the case this term, which would likely mean issuing a decision by late June. Jeffrey Davidson, one of the lawyers representing the University of California, says it’s “very unusual” to push for an expedited decision, especially because no one is seeking a stay.

Even if the injunction ends up being overturned, McKinney expects that the administration would continue to process the applications it has already received. That would follow the approach DHS took last year when Trump decided to phase out DACA. Charles Kuck, an Atlanta-based immigration lawyer, is similarly optimistic. “The Court’s not going to retroactively terminate the injunction,” he says.

So even if the Supreme Court does overturn the injunction this spring or summer, DACA recipients could have until then to apply for renewals that would allow them to keep their protections at least into 2020. By then, it’s possible that Congress will have passed a permanent fix. US Citizenship and Immigration Services (USCIS), the DHS agency that processes renewals, declined to say how it will process pending applications if the injunction is overturned because it does not comment on possible outcomes of ongoing litigation.

It’s not entirely clear why the Trump administration hasn’t tried to stay the injunction. Officially, the Justice Department argues that it wants to avoid further abrupt shifts in immigration policy. But in order to receive a stay, the department needs to demonstrate that failure to do so would cause “irreparable harm,” and the department may not be confident it can meet that standard. As lawyers for the University of California note in a court filing, it may be harder now that Trump has tweeted, “Does anybody really want to throw out good, educated and accomplished young people who have jobs, some serving in the military?”

Another reason highlighted in Politico Magazine by Eric Columbus, a top lawyer at DHS under the Obama administration, is that the Trump administration might not want DACA fully dead. While renewals are open, it’s easier for Republicans to argue there is not an urgent need to pass legislation that protects Dreamers. Citing the injunction, the anti-immigration Center for Immigration Studies wrote a piece headlined “There Is No Deadline on DACA.”

Immigrant advocates reject the idea that the injunction takes the pressure off of passing legislation that creates a path to citizenship for Dreamers. DACA has always been a temporary protection that blocks recipients from receiving many of the benefits of citizenship. And the round of renewals that is being processed now will presumably be the last one to go through. There have also been the psychological costs of living with a temporary status that is subject to the whims of the president. “All you’re giving people is a stay of execution,” Kuck says. “OK, I get one more last meal. Great. But what’s really happening?”

For now, Kuck and McKinney are focused on getting more clients to renew their DACA status. Both made clear that there are barriers to renewing. There’s a $495 application fee, and many DACA recipients are fearful of providing information to an administration that has sought to instill widespread fear among undocumented immigrants. So far, McKinney estimates that about 20 percent of his clients have gotten in touch about filing a renewal. Both lawyers say the applications are being processed surprisingly quickly, though none of their clients has yet received a final approval. USCIS says there’s not yet “data to publish” on how many people have applied and been approved for renewals. It adds in a statement to Mother Jones, “Properly filed requests are being accepted and will be adjudicated.”

Immigration lawyers typically recommended that DACA recipients file renewals up to six months early. That way, they’d generally receive their renewal just as their two-year work permits were expiring. Today, Kuck and McKinney are recommending that everyone apply for a renewal regardless of when their permits expire. Every extra couple of months can help, they say.

“It’s going to give you more time in the US,” Kuck says. “And it looks like you’re going to need as much time as we can possibly get, given how the Democrats and Republicans are treating this issue.”