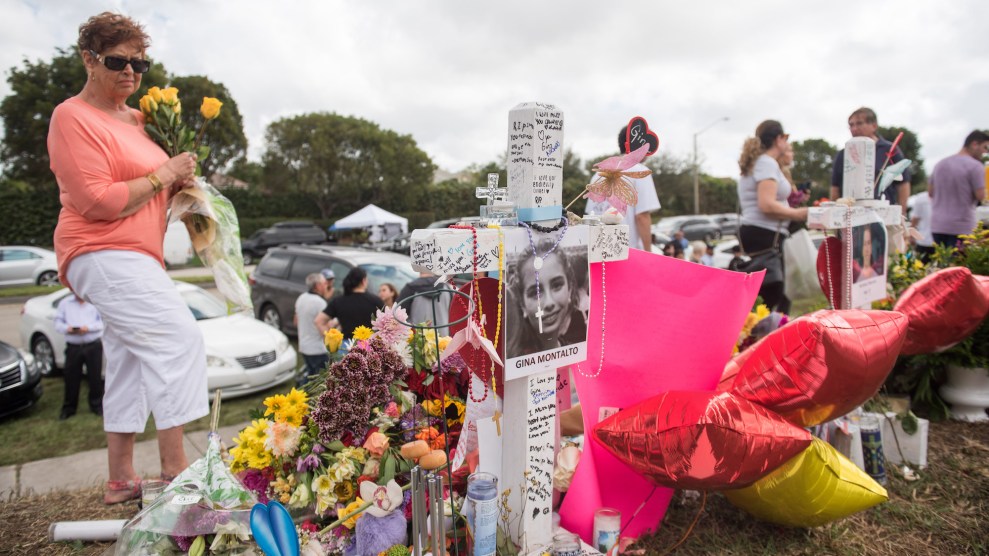 After the slaughter in Parkland, Florida, last week, an enormous memorial was set up outside Marjory Stoneman Douglas High to mourn the 17 people killed at the school. But as survivors began speaking out—planning a series of demonstrations next month and a national walkout in April—sympathetic mourners around the nation have created makeshift memorials of their own.

In a 1997 paper, Texas professor C. Allen Haney called spontaneous memorials an “emerging American mourning ritual,” a way to mark a place as sacred. Yet that ritual is evolving as memorials are erected in solidarity. We saw it when people commemorated 9/11, the 2015 Paris attacks, and the attacks on Brussels in 2016. Here, now, are some of the far-flung places where people have stepped up to commemorate the victims of Florida’s latest mass shooting.

Someone put up a makeshift memorial to the #Parkland victims in our neighborhood park in San Francisco. There is a flowering branch and a card with the name and age of each person who died. It’s moving and just incredibly sad. #NeverAgain pic.twitter.com/DLEfsPPni3

An Emerald Isle memorial for the 17 vicitims of the Parkland, FL shooting. pic.twitter.com/vbyuf1wILj

At the memorial outside Pulse Orlando, which is still up but surrounded by a memorial that thousands have signed. A surreal sight. The final photo shows roses covering names of the Parkland shooting victims from Wednesday. “49 from Orlando to Parkland 17, you are in our hearts.” pic.twitter.com/exaccr6vWh

Pulse today: at the base of the sign an impromptu memorial for the #Douglas 17 & survivors
Love from #OrlandoStrong#Parkland pic.twitter.com/tBKM4M0Ijs

One of the student victims, 14-year-old Jaime Guttenberg, was a “passionate dancer” who loved the color orange, as Broward County’s Sun-Sentinel reports. To honor her life, dancers across the country—in professional companies, at competitions, and in class—wore orange ribbons while they performed.

This one is for you, Jaime 🧡 We honor your life in tonight’s performance. This weekend dancer’s across America will wear orange ribbons to honor Jaime Guttenburg, a 14-year old dancer who was killed in the shooting at Marjory Stoneman Douglass High School in Parkland, FL. Tonight’s performance is for her 🧡 #OrangeRibbonsForJaime

The dance community recently lost a beautiful soul and dancer, Jamie Guttenberg. tonight, the senior @dianasdanceco dancers left her a spot at the barre and wore orange, her favorite color, ribbon for class to remember this young life that was taken too soon. #douglasstrong #orangeribbonsforjaime

#Adrian High School students walked out today to hold a memorial and protest as part of a nation-wide reaction to the Parkland school shooting. The students stayed outside for 17 minutes, 1 minute for each life lost in the shooting. #instagram https://t.co/E0VSbTlfuL pic.twitter.com/wgYW2hciFb