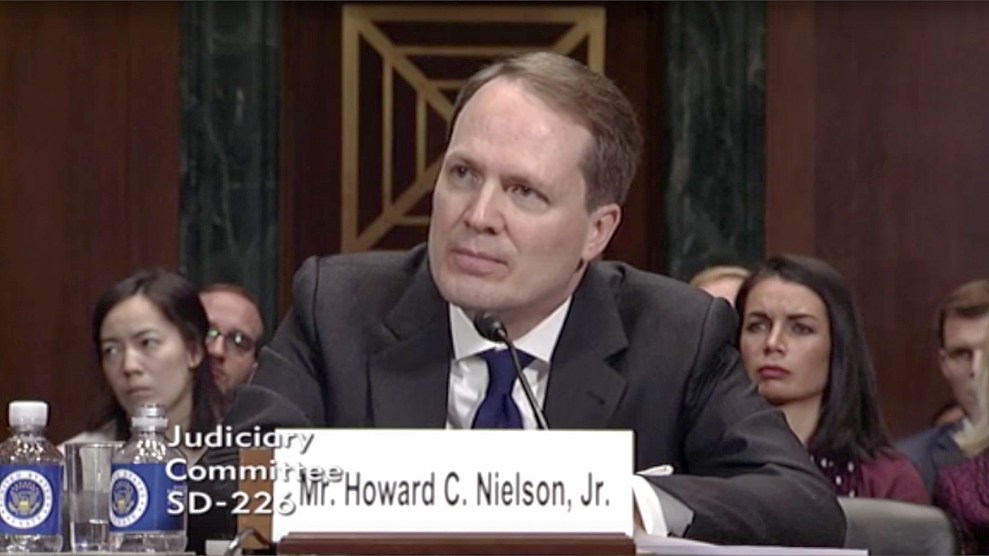 Howard Nielson appears before the Senate Judiciary Committee in January.

The Senate Judiciary Committee is scheduled to vote on another round of potential federal judges this morning, as Republicans continue to move Trump’s nominees forward at a quick pace. Howard Nielson, nominated to be a United State District Court judge in Utah, is expected to draw special attention.

Since Trump nominated him in September, Nielson has come under fire from liberal advocacy groups, Democratic senators, and even retired military officials. In a January judiciary committee hearing, Nielson faced questions about a motion he once argued against a gay judge and his links to the George W. Bush “torture memos.”

Nielson worked for the Justice Department’s Office of Legal Counsel from 2003 to 2005 under Stephen Bradbury, one of the authors of a series of memos that helped provide legal underpinning for the CIA’s Bush-era interrogation programs. The exact nature of Neilson’s involvement in those memos was unclear at the time of his nomination, but in response to questions from the Senate Judiciary Committee, Nielson acknowledged he had given input on “enhanced interrogation techniques,” but explained that final decisions had been left to senior officials.

Nielson was more directly involved in at least one similar document: In 2005, while serving in the OLC, Nielson wrote a memo arguing that the Geneva Convention ought not apply to anyone detained by US forces in Afghanistan. Beth Van Schaack, former war crimes expert at the U.S. Department of State who has written extensively about Nielson’s memo, argues that “if Nielson’s theory of the treaty were to prevail, United States personnel could torture civilians—so long as they did so outside the United States—without breaching the treaty.”

In early January, three retired senior military officers—including two former Naval Judge Advocate Generals—raised similar concerns about Nielson’s record in a letter to Senator Charles Grassley (R-Iowa), chairman of the Senate Judiciary Committee. “Rather than follow where the law leads, Mr. Nielson’s 2005 OLC memo struggled to invent a space beyond the reach of the Geneva Conventions, where legal protections for detainees would not apply,” they wrote. “There is no such space.”

Nielson has also come under fire for arguing, in 2011, that a homosexual judge should not have heard a landmark case regarding the constitutionality of gay marriage. As part of the team defending California’s voter-approved 2008 ballot initiative banning gay marriage, Proposition 8, Nielson filed a motion to vacate a district court’s judge’s decision knocking down the ban, arguing that the judge may not have been impartial because he “was in a committed, long-term, same-sex relationship throughout this case (and for many years before the case commenced).”

The motion “basically said: ‘You’re gay, so you can’t be impartial,'” says Kristine Lucius, who worked at the Senate Judiciary Committee for 15 years before joining Leadership Conference on Civil Rights, a legal advocacy organization.

If confirmed by the committee, Nielson will progress to the Senate floor for a final vote. There has been no indication yet any Republicans will vote against Nielson.

Since Trump took office in January 2017, the Senate has confirmed 24 of his nominees, including one who was rated “not qualified” by the American Bar Association. Currently, 51 nominees are pending.