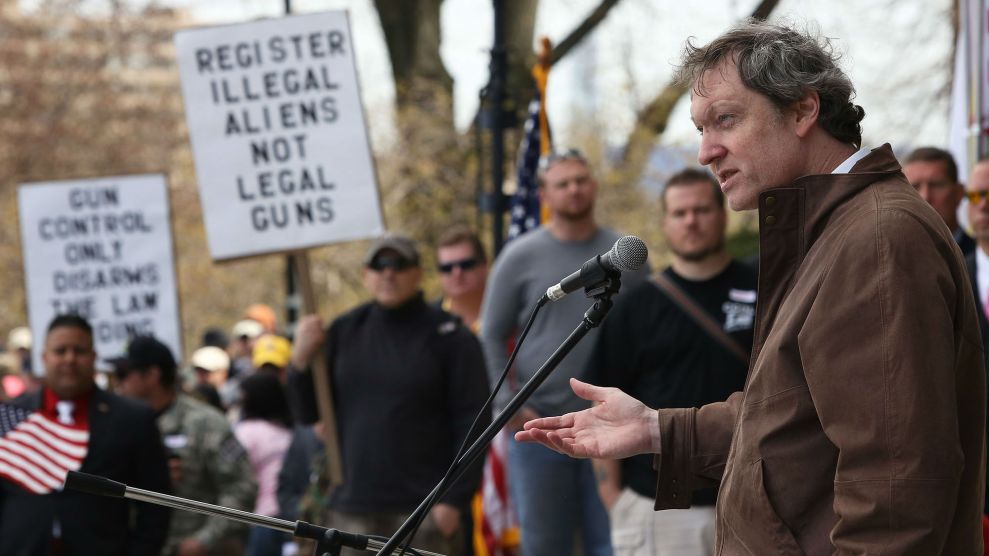 John Lott speaks to the crowd during a gun rights rally at the Connecticut State Capitol in Hartford in 2013.Jared Ramsdell/AP

Controversial economist John R. Lott Jr. has made questionable claims about gun rights, police shootings, and abortion. But his new pet issue seems to be immigration. In a working paper first published in December by Crime Prevention Research Center, the organization Lott founded in 2013 (and which, as recently as 2015, Lott ran out of his home), he claims that undocumented immigrants in Arizona are at least 146 percent more likely to be convicted of a crime than other Arizonans. Lott analyzed data on inmates who entered the Arizona state prison system between 1985 and 2017 and concludes: “To the extent that undocumented immigrants are reluctant to report crimes, the results underestimate undocumented immigrants share of crimes. Still, even given this caution, undocumented immigrants are convicted of crimes at much higher rates than U.S. citizens for they face longer sentences for more serious crimes.”

Too bad he’s wrong. In blog post for the Cato Institute on Monday, Alex Nowrasteh writes that Lott misunderstood the data, which does not differentiate between legal and illegal immigrants. Nowrasteh explains that Lott wrongly assumed the citizenship category labeled “non-US citizen and deportable” was synonymous with undocumented immigrants, when actually it includes legal immigrants who are deported for violating the terms of their visa. When “legal” immigrants are taken out of the equation, the number of undocumented Arizonans in prisons and jails drops dramatically, according to Nowrasteh’s calculations.

Lott fired back at Nowrasteh on Tuesday and addressed other criticisms of the paper. But the paper had already made the rounds among Republican lawmakers and conservative media eager to latch on to the debunked argument that immigrants commit more crime (PolitiFact notes that there is little data to say definitively whether undocumented immigrants commit more crime, as the Department of Homeland Security doesn’t track that number.)

Attorney General Jeff Sessions even cited Lott’s paper in a speech last month in Virginia about the administration’s immigration priorities, saying, “I’m sure you’ve heard that immigrants are less likely to commit a crime than average. But one study that just came out looked at the prison population in Arizona and found that illegal aliens are more than twice as likely to be convicted of crimes as Arizonans.”

This isn’t the first time that Lott’s research has been widely criticized as misleading and erroneous. But Lott, a darling of the Right, has influenced policymaking, including the explosion of right-to-carry laws across the country. Here are some of his biggest claims:

Lott’s most famous argument, that gun ownership actually decreases violent crime, dates back to the 1990s. In a study published in 1997, Lott, then a research fellow at the University of Chicago, and another researcher used county crime data from the late 1970s to the early 1990s to prove that allowing people to carry concealed weapons actually discourages violent crime and “appears to produce no increase in accidental deaths.” In 1998, Lott wrote a book on the topic called More Guns, Less Crime.

The claim was widely criticized by other researchers and the National Research Council, which concluded that existing research (including Lott’s) gave “no credible evidence” that right-to-carry laws deterred violent crime. After he was pushed to release the data behind one of his claims, he said it had all been lost in a computer crash. And in one of his more bizarre moves, Lott posed online as a former student to defend his own work. “In most circles, this goes down as fraud,” Science editor-in-chief Donald Kennedy wrote in the magazine.

However, the damage had already been done: In the five years after the book’s publication, Lott testified in favor of concealed-carry laws before Congress and multiple state legislatures. Lott’s work has been cited in congressional bills, and the website of the NRA Institute for Legislative Action cites Lott more than 140 times.

In a 2001 paper, Lott claimed that legalizing abortion in the United States increased murder rates “by around about 0.5 to 7 percent.” His reasoning? Liberal abortion and contraception laws increase out-of-wedlock births among “unmarried women,” which leads to less investment in the children’s wellbeing. Those children, Lott argues, are more likely to end up in trouble.

Lott’s analysis waded into an already controversial debate over whether the reduction in crime in the late 1980s and early 1990s could be attributed in part to the legalization of abortion in 1973. Some researchers say there are flaws in the original “abortion reduces crime” argument. But Lott’s work has also been criticized by fellow researchers, one of whom who called the 2001 paper “loaded with inaccurate claims, errors, and statistical mistakes.” Lott later filed a defamation suit against said researcher for criticizing his work. In a statement to conservative website CNSNews.com for a story about the paper, a spokeswoman for the pro-choice organization Religious Coalition for Reproductive Rights said Lott “offers so many unfounded, fallacious, racist, and confused assumptions that his overall opinions are useless.”

Regardless of the continuing debate over whether abortion reduces crime, as with most of Lott’s work, his findings were celebrated by the right. In 2001, the pro-life giant National Right to Life Committee declared, “Abortion Link to Crime Decrease Debunked,” and the organization’s executive director told CNSNews.com in 2008 that “it would be extraordinary if [abortion] did not lead to a more violent society.”

Following the 2015 shooting at a Planned Parenthood in Colorado, President Barack Obama and former Senate Majority Leader Harry Reid urged Congress to pass gun control legislation. “I say this every time we’ve got one of these mass shootings,” Obama said in a statement after the incident, “this just doesn’t happen in other countries.”

In a 2015 post on the Crime Prevention Research Center website, Lott’s group argues that “this claim is simply not true.” The analysis points out that, during the Obama administration, the United States ranks below several European countries in death rate per million people from mass public shootings. Predictably, conservative media outlets picked up the story, and Lott wrote a column for Fox News referencing his findings after the Las Vegas shooting.

However, as a Media Matters for America analysis points out, Lott’s claims only focus on public mass shootings involving machine guns, a criteria which excludes deadly incidents like the Sandy Hook Elementary School massacre and the Pulse nightclub shooting.

In a 2016 study, Lott and co-author Carlisle Moody, a professor at the College of William & Mary and a member of the Crime Prevention Research Center’s academic advisory board, argue that white police officers do not unfairly discriminate against black suspects. In a Fox News op-ed about the study, Lott says, “Many people incorrectly believe the police are racist.”

Of course, ample research has concluded that black suspects are much more likely to be shot by police than white ones. But the study nonetheless received coverage from the National Review, Breitbart, and the Washington Times, with Breitbart saying Lott’s research “runs against the claims of groups like Black Lives Matter.”